Throughout his response to the pandemic, Premier Daniel Andrews has maintained a simple, compelling mantra; whenever his government faces a difficult decision, it follows the public health advice.

Ombudsman Deborah Glass’s investigation into the housing commission tower lockdown gives the lie to this notion. 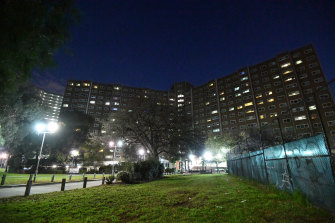 The public housing tower at 33 Alfred Street in North Melbourne was the centre of the COVID outbreak.Credit:Joe Armao

When Mr Andrews announced at 4.08pm on July 4 that residents of nine public housing towers across inner Melbourne would be confined to their homes immediately, he said he was following the public health advice and to do otherwise would put the lives of every Victorian at risk.

“It wasn’t discussed with me, and therefore I didn’t advise that for infection-control purposes it needed to happen instantaneously,” Dr van Diemen said.

“I didn’t have the whole story and I still don’t necessarily know what information was put forward pertaining to that decision.″⁣ 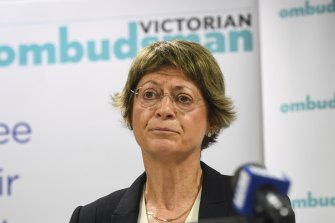 None of us do.

The decision appears to have been taken two hours earlier at a meeting of Victoria’s crisis council of cabinet. When asked by the Ombudsman to provide details of what was discussed in that meeting, Mr Andrews refused, citing cabinet confidentiality.

Writing to Ms Glass on behalf of Mr Andrews, Department of Premier and Cabinet secretary Jeremi Moule explained that, although cabinet documents were provided to Justice Jennifer Coate’s inquiry into hotel quarantine, her investigation “does not rise to the same level”.

In the absence of cabinet documents and testimony from ministers, the provenance of the decision to put the towers into lockdown without notice is plagued by the same vagaries that frustrated Justice Coate’s’s attempt to pinpoint the decision to use private security guards in quarantine hotels.

Dr van Diemen says she isn’t certain who made the decision, only that one appeared to have been made by about 2.00pm.

Emergency Management Commissioner Andrew Crisp told the Ombudsman the timing of the intervention “firmed up” throughout the day but he couldn’t recall who told him it had been brought forward 32 hours from the original plan.

Minutes before Mr Andrews announced the lockdown on live television, Dr Van Diemen was sitting in a car, riding between the Department of Health and Human Services offices and Treasury Place, trying to read on her phone legally binding directions about to be issued under her name and a 15-page human rights assessment prepared by DHHS lawyers.

Dr van Diemen told the Ombudsman that by the time she arrived at the Premier’s office, she felt she had no choice but to go along with what had been decided. 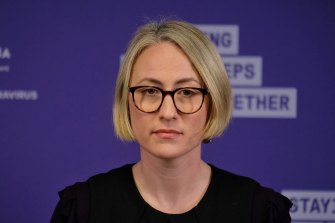 This doesn’t mean it was the wrong decision. The most damning part of Dr van Diemen’s evidence to the Ombudsman is that, even if she wanted to “put the brakes on this thing” she wouldn’t have felt comfortable doing so.

In effect, the Deputy CHO was reduced to a rubber stamp on the most dramatic public health intervention taken by the Andrews government through the pandemic.

“The circumstances surrounding the making of the decision gave rise to lingering concerns about the extent to which the Deputy CHO was permitted to bring an independent mind to the issue,″⁣ Ms Glass said.

Within the Ombudsman’s 181-page report and detailed response from DHHS, no one argues that decisive government intervention wasn’t necessary to stop the spread of COVID in the housing towers.

In its submission to the Ombudsman, the DHHS declared: “There are people alive today who may not have been alive if the department had not acted so quickly.”

The Ombudsman agrees the lockdown successfully contained the spread of a deadly virus.
The contention is the manner in which it was done. She puts forward the opinion that the decision to enforce such a tight lockdown without notice was not reasonable, justified or lawful.

If only the Andrews government had followed its own public health advice.

On the morning of July 4, senior DHHS officials including Dr Van Diemen had a plan to contain the COVID outbreak in the towers. At 11:00am, they discussed it with Mr Crisp and police command.

Tower residents would be required to quarantine at home for five days and undergo testing. The regime would come into force at 11:59pm on July 5. The police would be responsible for enforcement and the DHHS would have time to engage with the tower residents, arrange for provision of food, medicine and other support.

Dr Van Diemen told the Ombudsman she was “terrified” at the prospect of an uncontrolled outbreak in the densely populated towers. But she also believes that delaying the decision in keeping with the original plan would not have made a “hugely significant difference” to the outbreak.

Instead, the decision to give zero notice to residents, a decision taken by Mr Andrews and his most senior ministers without the advice of the acting CHO, plunged 3000 people into confusion and chaos.