Researchers behind BBC quiz show QI return with series of questions to test your knowledge… including festive general ignorance, obscure connections and true or false teasers

The team of writers and researchers behind BBC Two’s QI (nicknamed the QI Elves) spend the year researching interesting facts for the TV series plus a weekly podcast, No Such Thing As A Fish and a sister Radio Four programme The Museum of Curiosity.

For the last seven years they have been collating their favourite finds from the year in a Christmas fact book and this year’s book 2,024 QI Facts To Stop You In Your Tracks brings the series of facts up to a whopping 10,000.

That’s the same as the number of planes in the sky at any one time, the number of hiding places for nuts a squirrel can remember, and the number of smells the human nose can distinguish between.

The Elves are also big fans of quizzes and have crafted the below for Mail on Sunday readers.

There is 1 point per correct answer but points can be lost in the Festive General Ignorance round so tread carefully and good luck! 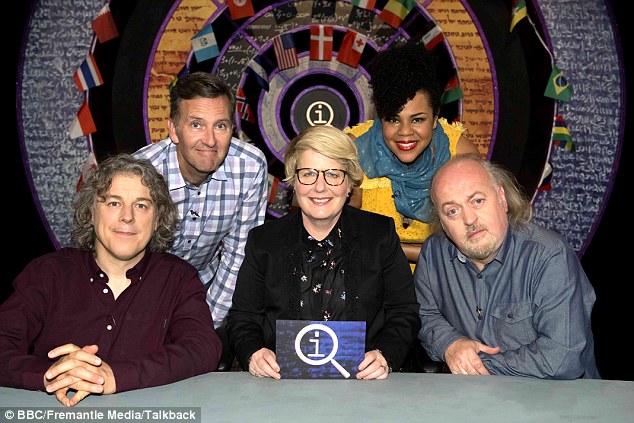 The team of writers and researchers behind BBC Two’s QI (nicknamed the QI Elves) spend the year researching interesting facts for the TV series plus a weekly podcast, No Such Thing As A Fish and a sister Radio Four programme The Museum of Curiosity

1. What is the name of the 2018 Pixar film that followed the lives of the Parr family?

2. Talinn is the capital of which country?

3. Which American playwright wrote Cat On A Hot Tin Roof?

4. In the 2018 series of Strictly Come Dancing which professional dancer was paired with Graeme Swan?

5. Which winter Olympic sport involves sledding feet first while lying on your back?

6. Tennys Sandgren is a player of which professional sport?

7. What was the name of Madonna’s debut album?

8. Which chemical element is represented by NA in the periodic table?

10. Which Christmas word is an anagram of the first letters of the previous nine answers?

Festive General Ignorance: 1 point per correct answer but minus five if you hit a klaxon

2. What do robins represent on Christmas cards?

3. When should you open the first door of your advent calendar?

4. What colour is the only triangular-shaped Quality Street?

5. Which holiday is celebrated on the 26th December every year?

6. In the Christmas film Elf where does Buddy grow up?

7. On which bank holiday is it most likely to snow?

8. Who wrote The Snowman?

1. Football was banned in London in 1314 because the sight of so many men with bare ankles was seen as shocking.

2. Wonder Woman was created by the inventor of the lie detector.

3. In 1981, Margaret Thatcher shared a Concorde flight with a giant panda.

5. Beer mats were originally placed on top of glasses to keep out the dust.

6. The first ice-hockey pucks were made from the lids of jam jars.

7. In 2016, a man from Wigan sent a pie into space to promote the World Pie Eating Championship.

8. In 2010, the national mint of Chile issued thousands of coins stamped ‘CHIIE’.

9. Half of the world’s twins are involved in scientific studies about twins.

10. During the Second World War, fish-and-chip-shop managers were exempt from military service.

1. In Johannesburg what is traditionally thrown out of a window on New Year’s Day?

A – A piece of furniture

B – The oldest person in the household

C – The outfit you wore on New Year’s Eve

2. In 19th-century France where did the most important dinner guests sit?

A – At the head of the table

B – In the middle of the table

C – Underneath the table

4. What does the mysterious green code that begins all the Matrix movies actually mean?

B – A scrambled version of the end credits

5. Why was the first director of Jaws fired?

A – He was scared of sharks

B – He kept calling the shark as a whale

6. What did the 17th-century game ‘Sparrow Mumbling’ involve?

A – Holding a live bird in your mouth

B – Pinning a beak on a picture of a sparrow

C – Trying to guess who was whispering in your ear

7. What is it called when a very large star quietly turns into a black hole?

B – A massive fail

8. The Kattenkabinet museum in Amsterdam only collects what kind of paintings?

A – Those depicting political meetings

B – Those by Rembrandt

9. Michael Bond, creator of Paddington Bear was a camera operator on which TV programme?

10. What has Beyoncé released more of?

1. In Happy Families what is the occupation of Mr Bun?

2. Which word comes from the Old English for a ‘narrow hedged-in road’?

3. Finnish meatballs contain so little meat they’ve had to be renamed _____?

4. Which room has the fewest number of letters in a game of Cluedo?

5. What is the surname of the best-selling novelist of all time?

6. What is the name of the Second World War air raid shelter named after the Lord Privy Seal in Neville Chamberlain’s cabinet?

7. Which type of screwdriver was patented in 1933 and has a cross recess?

8. Which pastry is an oblong version of a profiterole?

9. Which member of a rowing team goes backwards?

10. What links your nine previous answers?

1. Wham! 2. Klaxon: Postmen. Answer: Robins have been on Christmas cards long before Victorian postmen and their red outfits, they represent robins although there is a song called ‘the Robin’s appeal’ so there is a theory they may represent poverty.

5. Klaxon: Boxing Day. Answer: The Feast of St Stephen. This happens every year on December 26th whereas Boxing Day takes place on the first working day after Christmas. If Christmas is on a Saturday then Boxing Day moves to December 27th as it will take place on the Monday, not the Sunday.

7. Klaxons: Christmas, Boxing Day, New Year’s Day. Answer: Easter – according to the Met Office it is more likely to snow at Easter than at Christmas. Between 1981 and 2010, December averaged 3.9 days of snow but March had 4.2.

3. False – Thatcher refused to share the flight with the panda.

6. False – they were originally made from frozen cow dung.

9. False – 2% of twins are involved in scientific studies about twins.

10. They are all the surnames of QI panellists.