Retired Army major, 80, embarks on 100 mile charity row in home-made boat dubbed the ‘Tintanic’ which is made out of corrugated iron, curtain hooks and hosepipe

Travelling just 2mph, retired Army major Michael Stanley, is determined to row the stretch on the Chichester canal in West Sussex to raise money for St Wilfrid’s Hospice in Bosham.

The veteran, who served in The Royal Scots Dragoon Guards for 35 years has dubbed boat the Tintanic after creating it from two sheets of corrugated iron, curtain hooks and hosepipe.

Mr Stanley, known as Major Mick, had aimed to raise £1,000 for St Wilfrid’s Hospice in Bosham but has already surpassed £9,100. Michael Stanley, who is also known as ‘Major Mick’, 80, rows along the Chichester canal, West Sussex, in his home-made rowing boat, named the Tintanic

He said had been inspired to make the boat during lockdown after a recent visit to India, where he saw the tin boats used.

He said: ‘I got two sheets of corrugated iron, put them together and tried to make them float.

‘The initial attempts were not good because it wasn’t stable and I was tipped into the sea twice and had total immersion. Major Mick, 80, is rowing along the Chichester canal for a 100-mile charity challenge, travelling 3 miles at a time, to raise money for St Wilfrid’s Hospice in Bosham The veteran, who served in The Royal Scots Dragoon Guards for 35 years has dubbed boat the Tintanic

‘Then I developed the buoyancy fenders on both sides and it’s now reasonably stable, the only slight problem is when I get in and out, but I think I have mastered it now.’

Mr Stanley said his only luxury onboard was his wife’s garden kneeling pad, and added: ‘It’s how I imagine sitting in a Rolls-Royce.’

Describing the reactions from passers-by, he added: ‘My reward is seeing people’s faces, and what they are thinking I don’t mind as long as it puts a smile on their faces, as in these times we need something to smile about. Here Mr Stanley places a union jack at the bow of his Tintanic, which he aims to row 100 miles along Chichester canal The boat is fashioned from two sheets of corrugated iron, curtain hooks and hosepipe 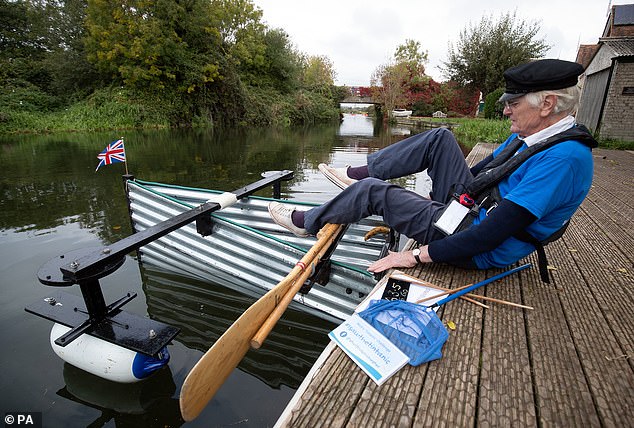 ‘I have been called all sorts of things, Merry Major, Legend, Awesome, Mad Major, some woman said ‘I love you sir’ which is a bit over the top.

‘The most telling comment is the teenagers who said ‘That’s really cool’. For an 80-year-old to be called cool by a teenager is something special.

‘It’s fun and I really enjoy it and the generosity of the general public is wonderful, we have such nasty news but at its core it’s a fantastic country.’ 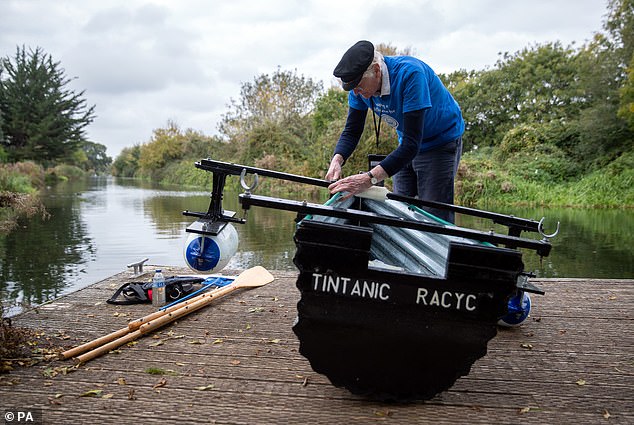 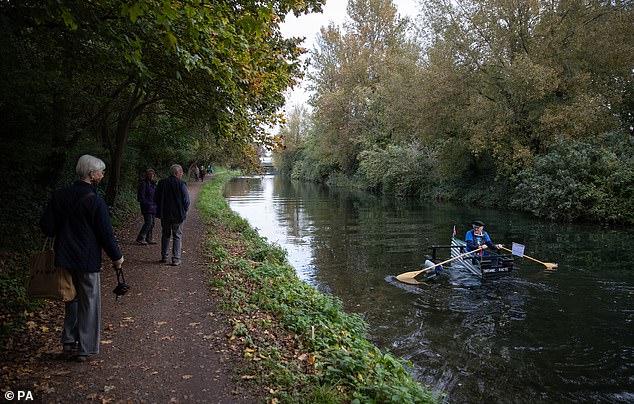 Alex Burch, St Wilfrid’s Hospice community fundraising manager, said: ‘We are very proud so many people like Major Mick are willing to get active for St Wilfrid’s, finding new and exciting ways to support end-of-life care in their local community. Thank you, Major Mick, stay safe and dry on your voyages.’

Mr Stanley, from Chichester, is completing his 100-mile journey in stages going back and forth on the Chichester canal with the aim of completing the challenge by December 18. 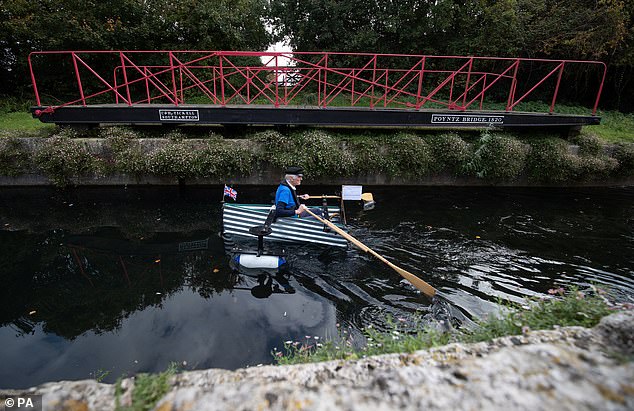