The hire car that can drive itself to you: Revolutionary car-hailing service sends vehicles to drivers using remote-control tech

A revolutionary car-hailing service that sends vehicles to drivers using remote-control technology is being trialled in a Buckinghamshire town.

Customers of the Fetch scheme in Milton Keynes use an app to summon a car that is driven to them by a control room operator.

Passengers then drive themselves to their destination before the car is remotely parked or sent to the next customer.

The multi-million-pound trial is taking place on private land around the MK Dons football stadium because it is like a town in small scale, with a retail park, hotel and crossroads, as well as pedestrians and cyclists.

The scheme is run by British start-up Imperium Drive. So far, only employees have used the app but players in the League One team will start using it later this month, to get to their training ground. 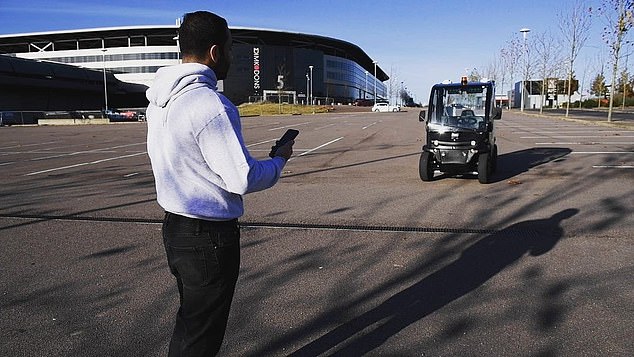 The Fetch trial in Milton Keynes, operated by start-up firm Imperium Drive, allows customers to use an app to summon a car that is driven to them by a control room operator

The app is currently free. The company says that for now it is not competing with firms that are working on driverless cars, such as Tesla and Ford.

Chief executive Koosha Kaveh, 37, a Cambridge-educated electrical engineer, said: ‘We are not an autonomous vehicle company, we have remotely driven technology which requires a lot less investment and a lot less time to bring to market.

‘We believe that the autonomy promised is being pushed back because it is a very difficult problem to solve, whereas remote driving still has a person involved – in a control room.’

The company has three cars at present, including a saloon and an electric microcar.

The trial, which has received Government funding, could be broadened to cover Milton Keynes as soon as March – but the cars are not yet legal on public roads.

If successful, there are plans to seek more funding from investors and extend the scheme across the UK.

It is hoped that one controller will be able to manage ten cars.

The firm claims there are environmental benefits as it could cut the number of private cars on roads.

Remote driving technology is being tested in other countries but Fetch, which began last year, is understood to be a UK first.