Rishi Sunak refused to say categorically if the Government will deliver on its triple-lock pensions increase promise as he was grilled by Andrew Neil about ballooning government spending.

The triple-lock guarantee, introduced in 2010, means that the state pension rises in line with inflation, earnings or 2.5 per cent – whichever is the highest.

The Chancellor is understood to have raised concerns privately that the bill will soar because distortions caused by the furlough scheme mean average wages are forecast to increase sharply, which would lead to an equal rise in the state pension.

Latest figures show average wages grew by 8.4 per cent in the 12 months to April, as millions of employees returned to work after lockdown, which means that could be the measure by which the state pension is calculated next year.

An increase of 8 per cent would cost the Treasury an extra £7 billion, it is estimated. By contrast another 2.5 per cent rise like the one added to pensions this year would cost £2 billion.

As he appeared on GB News, Mr Sunak insisted that the triple lock was ‘still government policy’, but when questioned repeatedly on whether he would stick to it if there is a six to eight per cent rise in average earnings, he said: ‘I cannot speculate and comment on what might happen in the future.’

Andrew Neil had opened the interview with a warning about Britain’s rising spending, saying the country’s debt ‘now stands at over £2 trillion’.

He went on to grill the Chancellor about the cost of Boris Johnson’s pledge to make Britain ‘net zero carbon by 2050’. 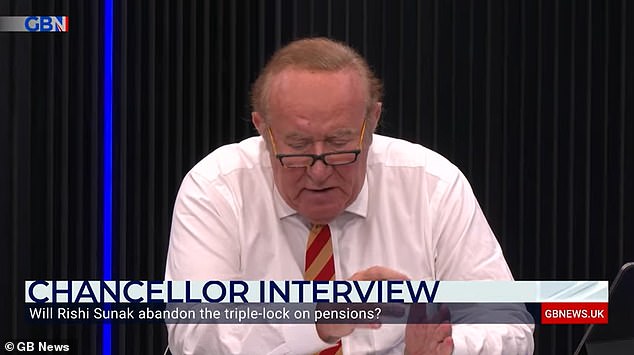 Andrew Neil had opened the interview with a warning about Britain’s rising spending, saying the country’s debt ‘now stands at over £2 trillion’

Mr Neil said: ‘The truth is, Chancellor, and the Treasury knows this, it just won’t make it public, the costs are eye-watering.’

Mr Sunak replied: ‘Of course there are costs in transitions and the committee for climate change has talked about that.’

The GB News presenter said: ‘Your predecessor, Philip Hammond, predecessor bar one, he sent a note when he was Chancellor to Theresa May saying it would cost £1trillion. Is that in the ball park?

Mr Sunak said: ‘When we go through the analysis you’ll see.’

During the interview, Mr Sunak was asked if he is a ‘big government conservative’ like the Prime Minister or a ‘fiscal conservative’.

He replied: ‘Of course, I’m a fiscal conservative… it’s not my money, it is other people’s money and I take my responsibility for that very seriously.

‘But it is important to me to deliver on our commitments in the manifesto to invest in public services to spread opportunity around the country.’

Mr Sunak also acknowledged that tackling climate change would be expensive, saying there would be ‘costly transitions’.

But the green economy will also present ‘opportunities’, he added, insisting Government actions on the environment would not fall on ‘just one side of the ledger’.

Some MPs fear it would be wrong to give a massive boost to pensioners’ incomes at a time when many working-age adults, students and children are still suffering the effects of the Covid crisis.

They want Ministers to amend the triple lock next year to prevent a disproportionate increase in pensions caused by the one-off leap in wage growth. 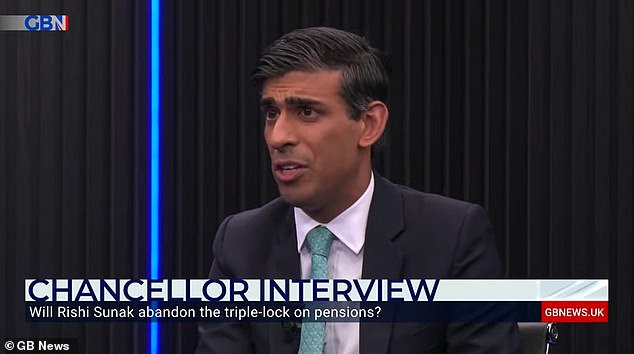 Nigel Mills, chairman of the All-Party Parliamentary Group on Pensions, said: ‘The triple lock wasn’t meant to be based on artificially out-of-line earnings data.’

And former Pensions Minister Sir Steve Webb, partner at the consultancy LCP, added: ‘If the point of the earnings link is to make sure pensioners don’t fall behind the rest of the population, the Government has got to do something.’

The Treasury said the decision on increases would be taken by Work and Pensions Secretary Thérèse Coffey.

‘As you would expect, any decisions around uprating will be taken by the Secretary of State in her annual review,’ a spokesman said.

‘Our primary focus is to ensure fairness for both pensioners and taxpayers.’

Mr Sunak also said on Wednesday that inflation expectations in Britain are well anchored around the Bank of England’s target of 2% – after data showed inflation broke above the target for the first time in nearly two years.

The Chancellor said there was no sign that expectations for higher inflation were becoming entrenched as the economy bounces back from its coronavirus lockdowns.

‘That’s different to what’s happening in the U.S. so I think actually here, people’s expectation is inflation will remain at target over the medium term, but of course that’s one of the many risks that it’s my job to worry about,’ he told GB News.

Sunak also told GB News there would be would be no return to austerity after his £350 billion of spending to see Britain’s economy through the COVID-19 pandemic.

However, he said he wanted to protect the country against shocks ahead and not leave Britain’s debt to be paid for by future generations

‘(And) that does require a bit of focus and prioritisation,’ Sunak said.