Royal fans braved grey skies and showers for a glimpse of the Prince and Princess of Wales at Boston City Hall on Wednesday afternoon – with many taking position hours before the future King and Queen of England were due to appear.

Some brought flowers for the couple and others clutched messages of support and union jacks.

But the visit has already been overshadowed by a royal racism scandal gripping the UK after Wills’ godmother Lady Susan Hussey was forced to resign from her job as lady-in-waiting to Queen Camilla.

Hussey was condemned after asking black British charity worker Ngozi Fulani if she was from Africa while Fulani attended a reception held by Camilla at Buckingham Palace on Tuesday.

But if the royals’ mood has been sullied by the incident, their fans were as enthusiastic as ever.

Tyler Washburn, 29, was carrying the same Union Jack flag which he waved during the Queen’s visit to the state of Virginia in 2007. He draped the flag over a metal barrier which surrounded a stage where the Prince was due to give a speech this afternoon.

Washburn, who travelled four hours from Maine and arrived at 12.30pm – around four hours before the couple were due to appear – said: ‘The monarchy plays a very important role in bringing a thread between the past and the future. They are a force for good. 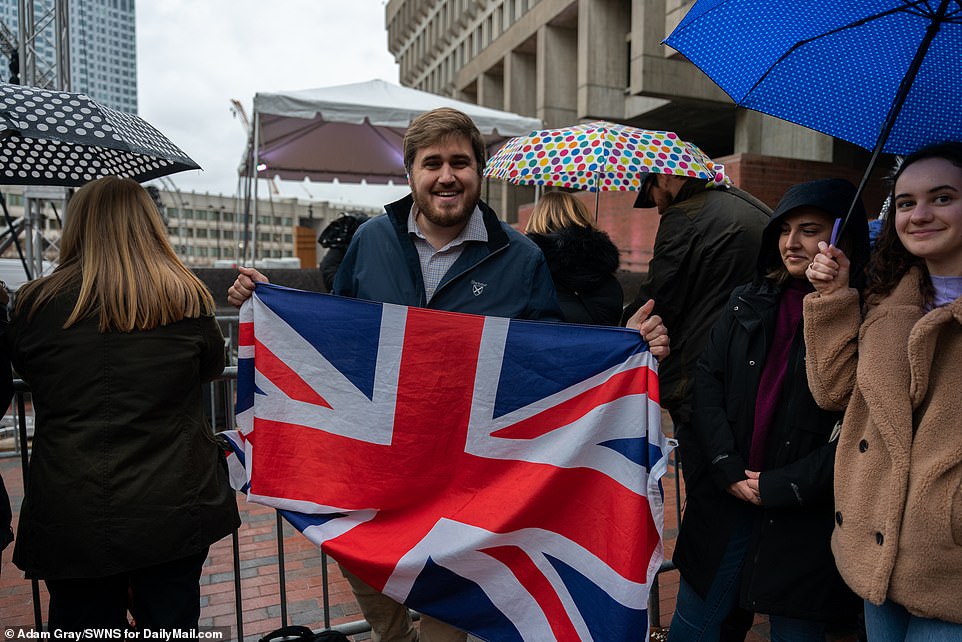 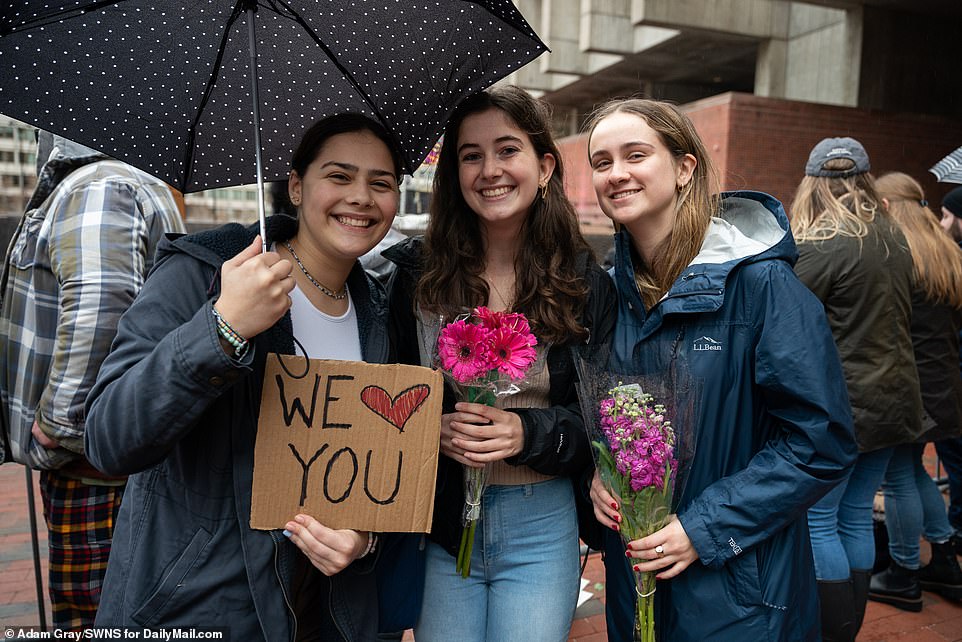 Ella Stamerra, Alanna Quirk-Aboujaoude and Abby Grace are all just 18 – but were so excited by the prospect of meeting the future king and queen that they stood out in the rain with flowers to give to them

‘I came down this morning to see the Prince and Princess of Wales and I’ve brought the flag my father gave to me when we saw the Queen’s visit to Virginia when I was in eighth grade. It was a birthday present.

‘I have always thought the royal family set a great example.’

He said Kate and William are ‘bringing a new generation’s voice to the table’.

‘Coming today and talking about the Earthshot prize is a great example of using that influence they have to affect positive change.’

University students Ella Stamerra, Alanna Quirk-Aboujaoude and Abby Grace, all 18, brought flowers and a sign with the message ‘we love you’.

Stamerra said: ‘I have always had a fascination with the royals and the fact that we can see them in person – I have seen so many pictures of them meeting people – it’s the appeal of the royals.

‘They are not just staying in their country. They’ve come to the US, which shows they are expanding, they are global figures.’ 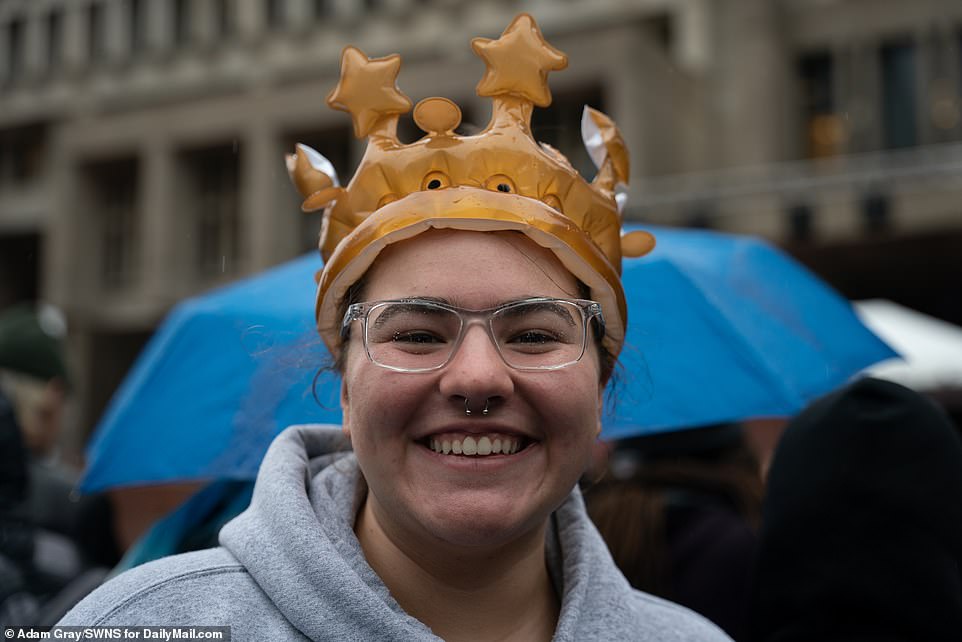 One royal fan even donned an inflatable gold crown to show her fondness for Wills and Kate, who are in Boston to host the Earthshot Prize 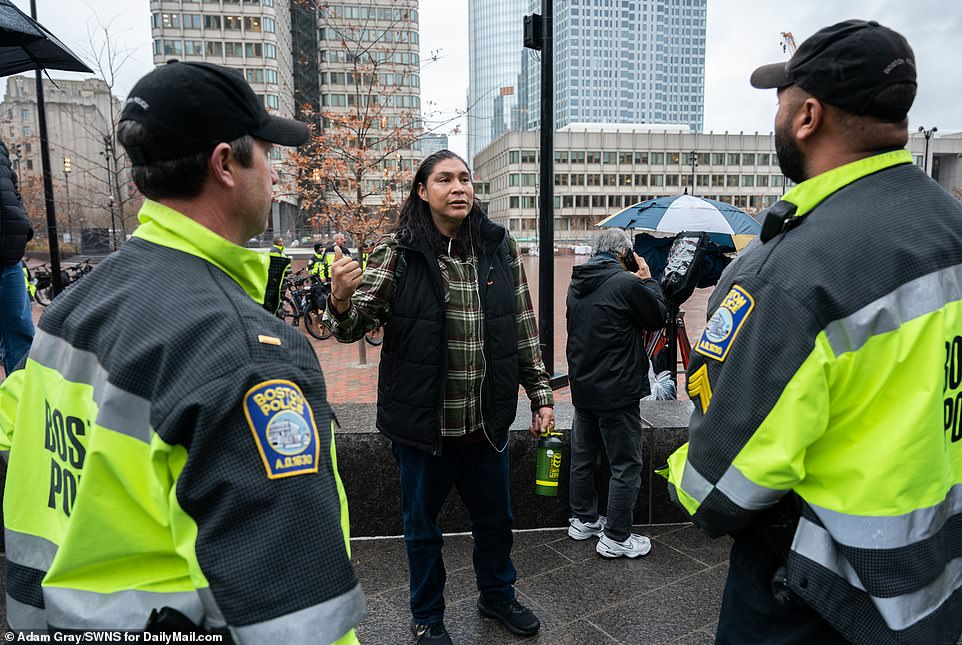 There was drama too. This man was told to leave the area by police after abusing royal-watchers 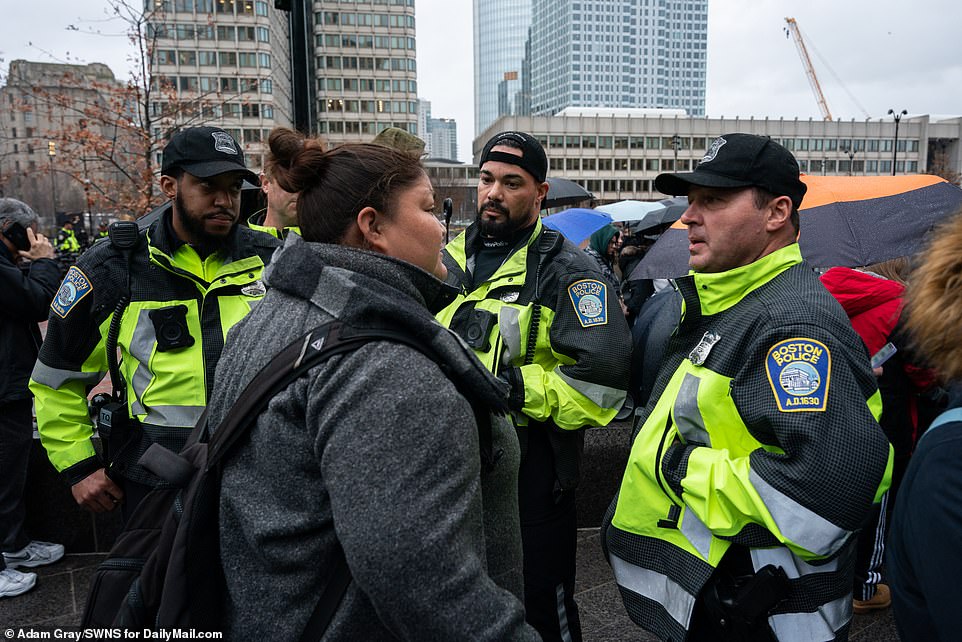 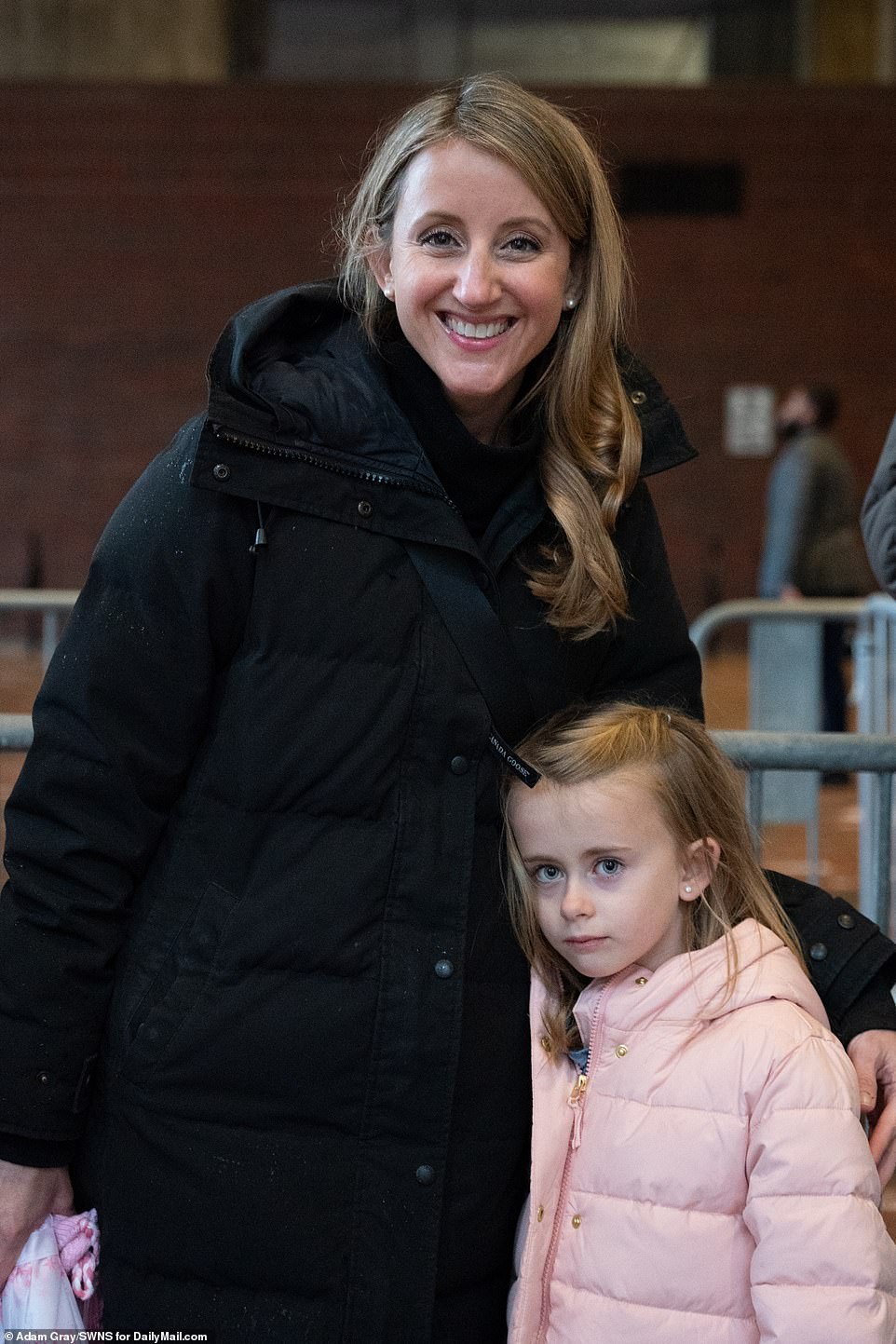 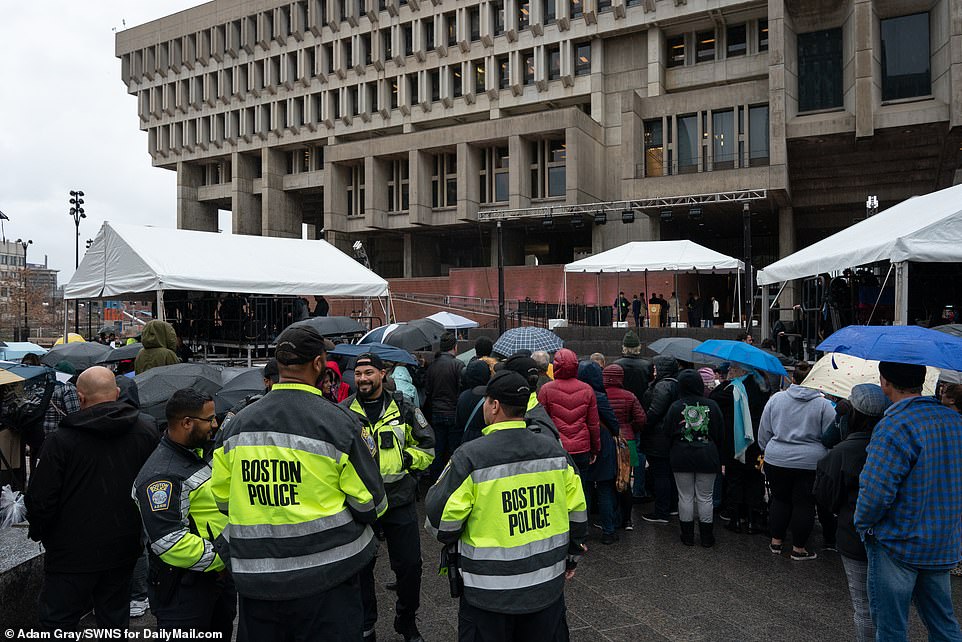 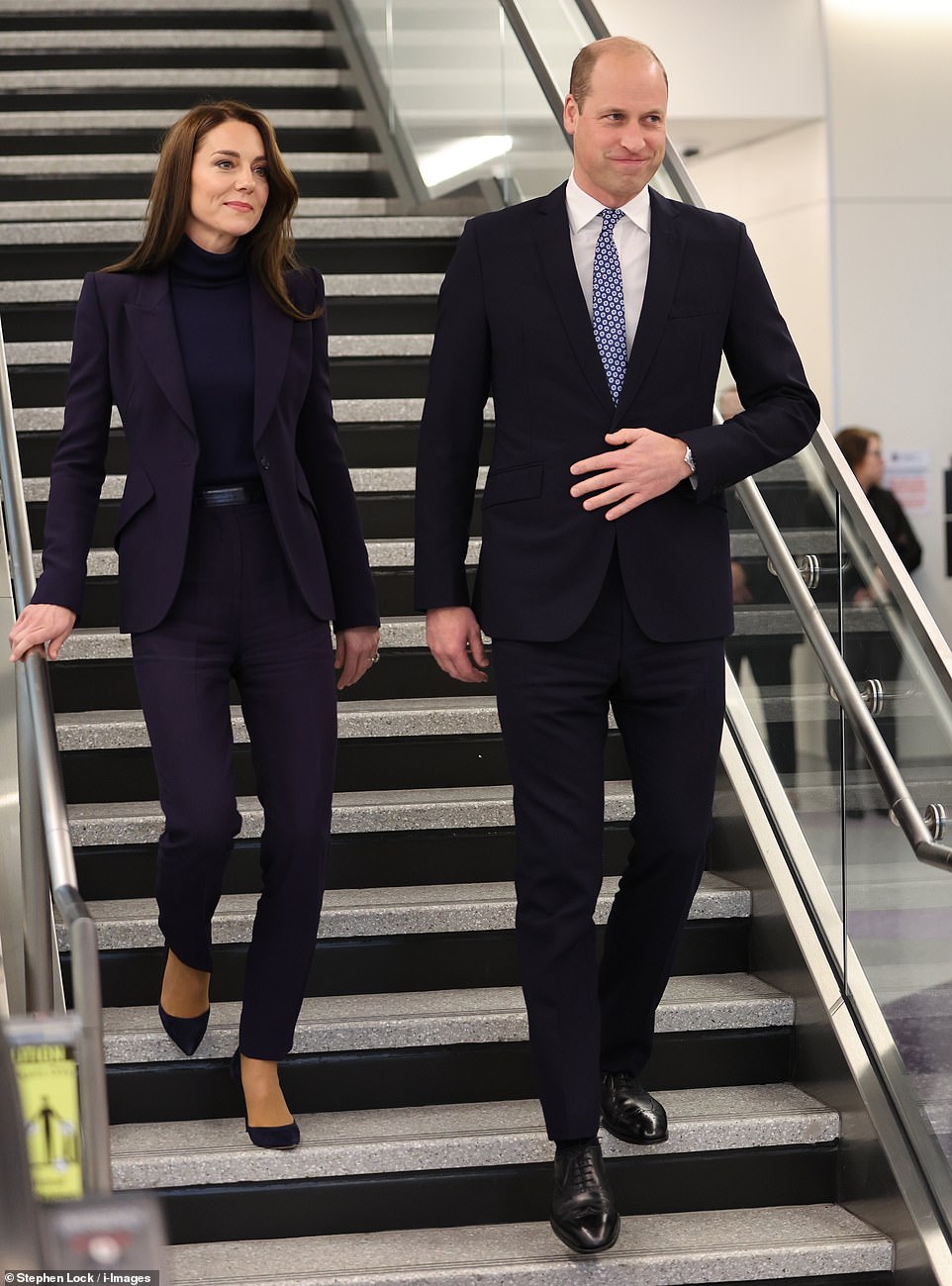 The Prince of Wales grimaced as he and Kate Middleton arrived in Boston today at the start of a whirlwind three-day trip to the US, flying in on a commercial British Airways flight – amid a controversial royal race row

Melissa Welch, 40, and her daughter Elle, six, travelled from Duxbury, Massachusetts, to see a Princess in person ‘for the first time’.

Melissa said: ‘Elle is excited to be here to see a princess. We’re just big fans of the British royal family so excited to finally see them in Boston.

‘I heard about this back in July when it was announced.

‘We were so excited to hear that the Earthshot prize was in Boston. We were following along all last year. I think it’s great what they are doing for the plant and the climate. We were so excited when they announced they were coming to Boston.

‘I honestly feel like it’s a once in a lifetime opportunity. The last time there was a royal visit here was in 1976 so I feel like this doesn’t come along that often.

‘I’m very proud of the early years work that Kate is championing as a mother. They are using their clout to bring about change for future generations.’

‘I love her. I woke up early and watched her get married, I watched when the kids were born. Unfortunately, I was watching when she passed. 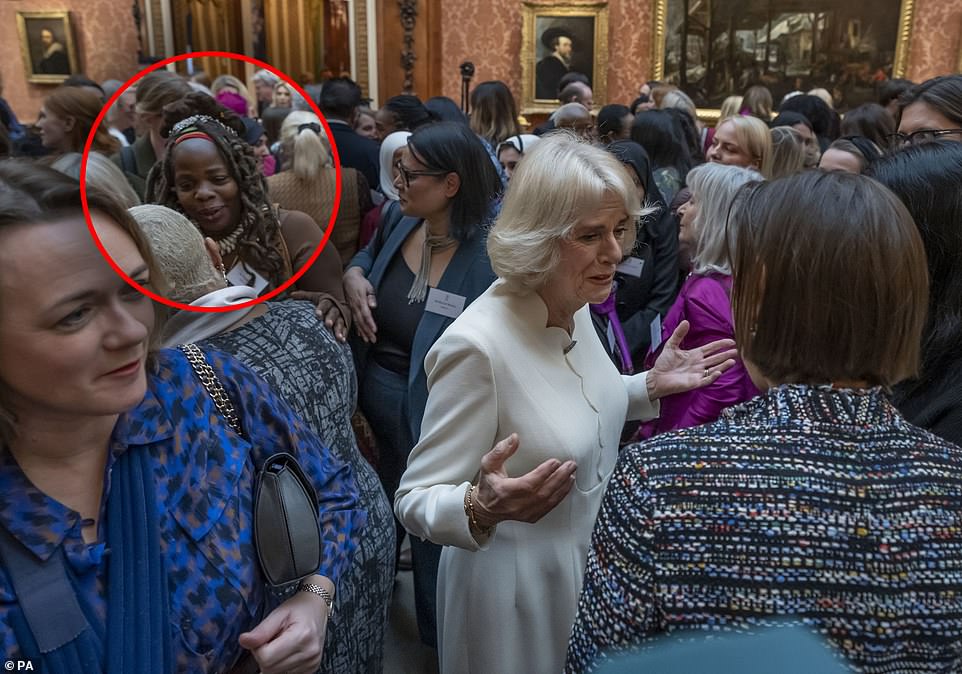 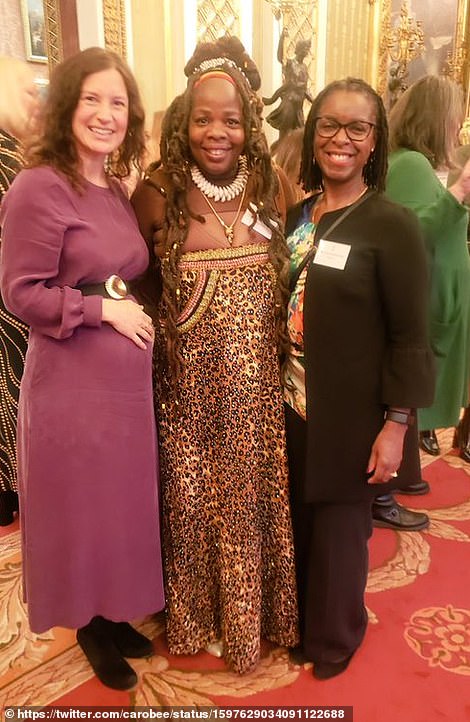 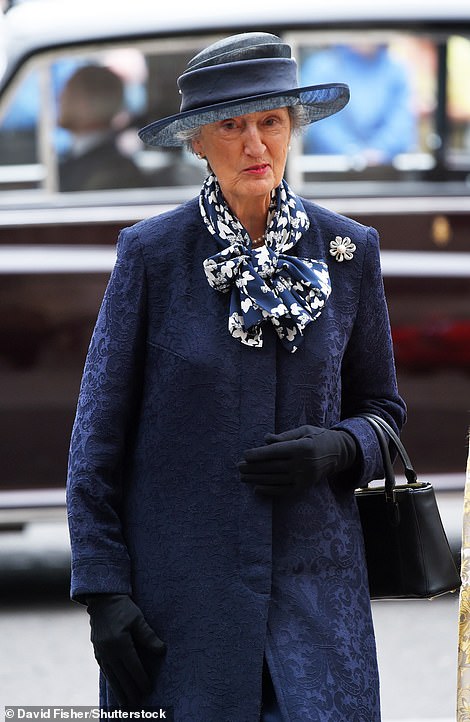 Ngozi (pictured center left at Buckingham Palace yesterday), director of the east London charity Sistah Space, claims a royal aide, believed to be Lady Susan Hussey (right), asked her: ‘What part of Africa are you from?’

‘I love her and I am so honored to be seeing her son. I came by myself I don’t care about the rain.’

At one point before the couple’s arrival, around eight police officers were forced to intervene when a man and woman began shouting expletives at members of the crowd who’d gathered at the gates.

The woman was stopped as she tried to push towards the metal barrier which surrounded the stage where the Prince will give a speech.

A huge security operation has been mounted around the city hall for the couple’s arrival.

William and Kate touched down at Boston Logan Airport on a commercial British Airways flight earlier on Wednesday.

‘Racism has no place in our society’: Kensington Palace condemns ‘unacceptable comments’ by Prince William’s own godmother Lady Susan Hussey as she RESIGNS from Buckingham Palace role

Prince William’s spokesman today condemned ‘unacceptable’ comments by his own godmother who resigned from the royal household after she was accused of racism at a Buckingham Palace reception set up by Queen Consort Camilla.

Lady Susan Hussey, 83, a former lady-in-waiting to the late Queen, quit after she allegedly refused to believe a black domestic abuse campaigner was British and asked her: ‘What part of Africa are you from?’ as they spoke at the event yesterday.

The resignation is humiliating for Camilla and a potential PR disaster for Lady Hussey’s godson William, who lands in the US today with the Princess of Wales for a landmark three-day tour now at risk of being overshadowed by the race row.

Addressing reporters before the start of the visit, a Kensington Palace spokesman said: ‘I want to address the story relating to a guest attending a reception at Buckingham Palace last night.

‘This is a matter for Buckingham Palace but as the Prince of Wales’ spokesperson I appreciate you’re all here and understand you’ll want to ask about it. So let me address it head on.

‘I was really disappointed to hear about the guests experience at Buckingham Palace last night. Obviously, I wasn’t there, but racism has no place in our society. The comments were unacceptable, and it is right that the individual has stepped aside with immediate effect.’

He added that the prince is ‘aware of the comments’ and ‘thinks the course of action taken is correct’.

Speaking today, Ngozi Fulani, director of the east London charity Sistah Space, said she was so shocked by the incident at Buckingham Palace that she ‘couldn’t report it to the Queen Consort’ who had thrown the reception.

‘It was a gradual feeling, this lady came from nowhere. She demanded to know where I was from. No matter how many times I answered her it wasn’t the answer she wanted,’ she said.

‘It continued for about five or ten minutes. Gradually, I realized I need to do something about this, but what? What can I do? I just handled it as best I could.’

The Palace said it took the incident extremely seriously’ and had investigated immediately. Staff have been ‘reminded of the diversity and inclusivity policies which they are required to uphold at all times’, a spokesman said.