By sea, by FROZEN land: Royal Marines brave bitter -30C in the Arctic during brutal survival training in one of the most inhospitable places on the planet

Royal Marines have braved bitter -30C temperatures in the Arctic during a brutal survival training exercise in one of the most of inhospitable places on Earth.

Cold weather warfare specialists, the 45 Commando battalion, were deployed to northern Norway at the end of January, to undergo a gruelling training exercise.

The operation teaches essential skills for surviving in the Arctic, including building shelters, living off the land and dealing with cold shock during the infamous ice breaking drills.

The intense drill sees Royal Marines plunged into a hole in the ice, forcing them to climb out of the water unassisted using nothing but ski poles.

Pictures from this year’s exercise shows commandos, usually based at Arbroath in Scotland, facing freezing conditions, sitting in snow shelters and training in the dark. 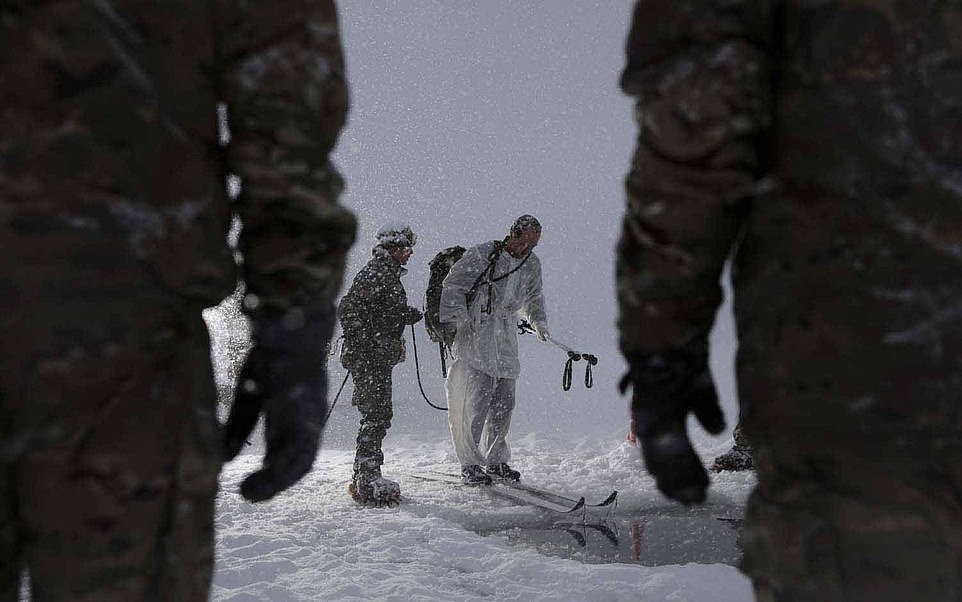 Cold weather warfare specialists 45 Commando battalion have spent recent weeks training in northern Norway as part of a training operation. Among the exercises to take place was a brutal ice breaking drill that sees Royal Marines plunge into freezing-cold water 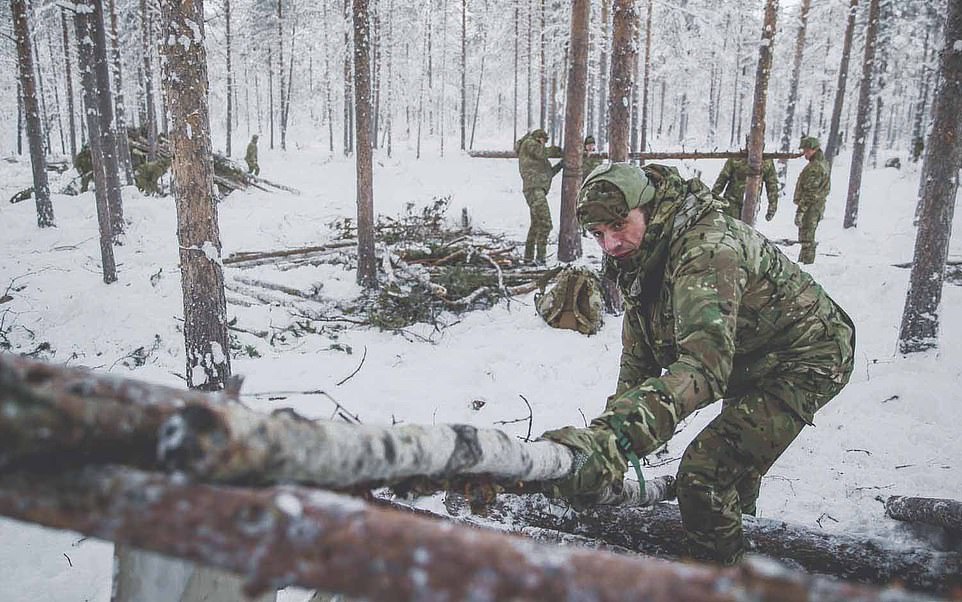 The exercise is designed to train commandos for the brutal terrain of the Arctic Circle. They are taught how to survive using the elements by building shelters out of wood in bitterly cold conditions 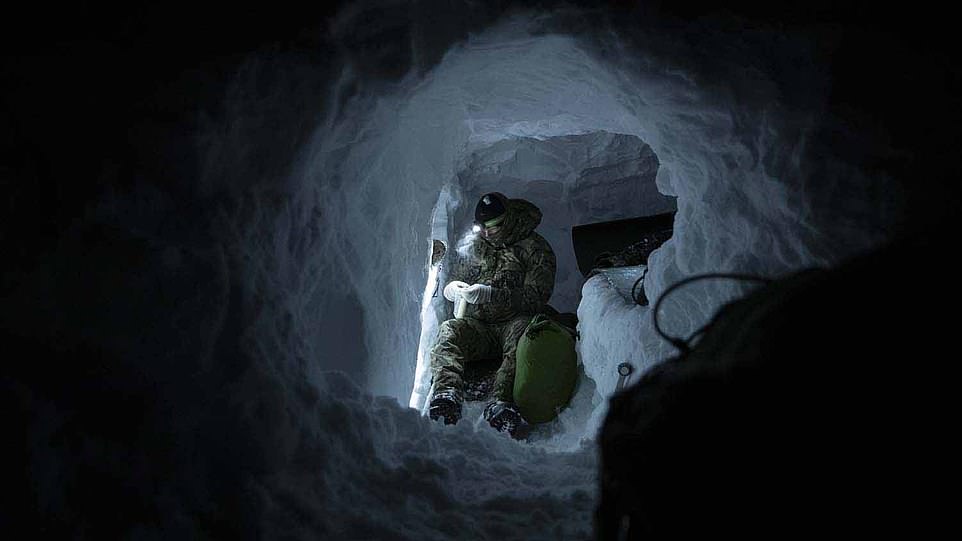 Temperatures can reach as low as -30C in northern Norway at this time of year, making it possible for commandos to build shelters out of snow as part of the training exercise

The exercise is held during the winter to prepare marines for the harshest conditions – which feature temperatures well below freezing and days spent mostly in the dark – with as little as four hours of daylight.

Explaining the importance of the ice breaking drill, 45 Commandos’ website states: ‘This brutal part of the training is designed to help participants recognise and reduce the risks of cold shock: a physical response to being immersed in cold water that can rapidly incapacitate and even kill.

‘Crossing a frozen lake or river can bring a tactical advantage but comes at significant risk, so ice breaking is about preparing for being suddenly dropped into bracing water.

‘After rewarming from their dip through the ice, those on the survival course head into the wilderness to construct and inhabit survival shelters.

45 Commando is classed as the high-readiness Lead Commando Group, meaning it must always be ready to conduct operations anywhere in the world at a moment’s notice, in all extremes of environment, from Arctic to desert and jungle.

After mastering survival skills, marines refresh their ability to move across the Arctic terrain – on skis and snow shoes, before honing tactics and combat abilities on the final fight stage of the deployment.

Marine Stuart Bryant, who is on his first Norway deployment, said: ‘I learnt a lot this week and I am actually surprised by how much I enjoyed it. It takes a while to get used to the cold, but keeping busy and active takes your mind off it.’ 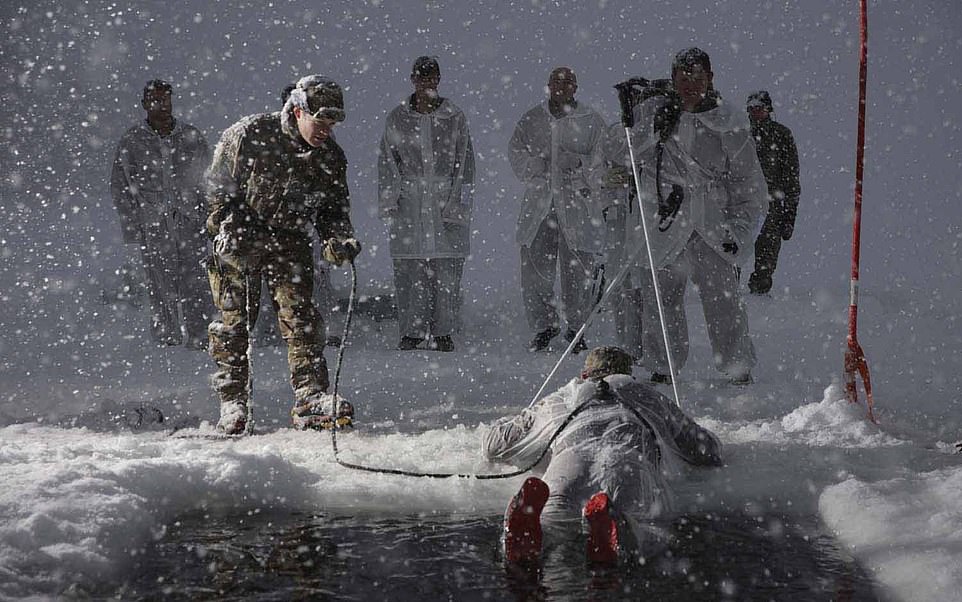 The infamous ice breaking drill sees Royal Marines plunged into a hole in the ice, forcing them to climb out of the water unassisted using nothing but ski poles 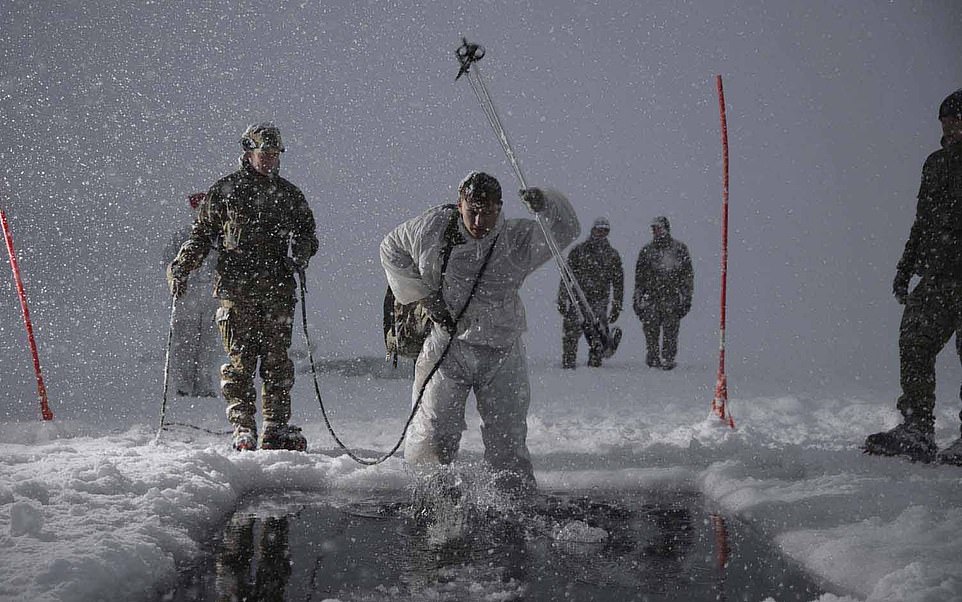 Temperatures reach well below freezing at this time of year, but commandos are forced to take the exercise to prepare for the harsh reality of warfare in the Arctic 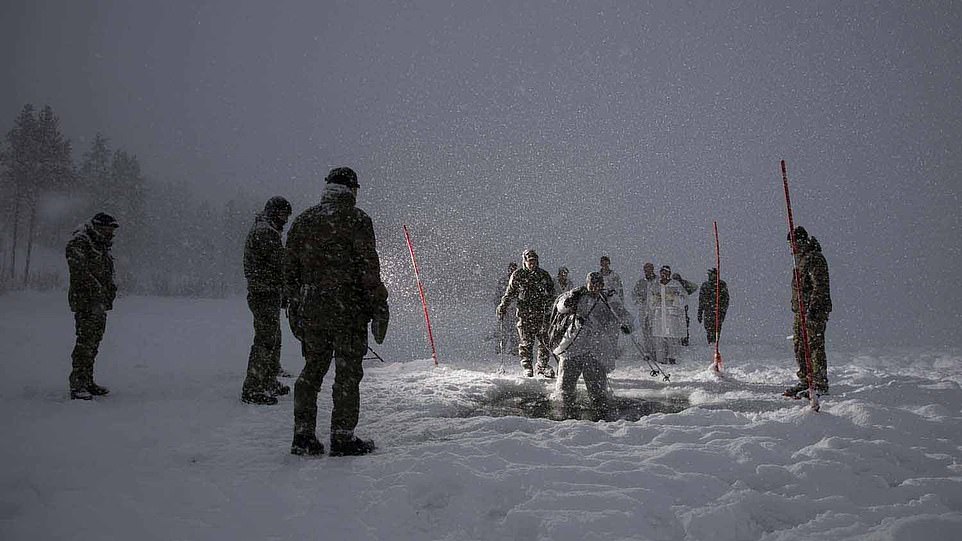 Most of the training exercise is carried out in the dark, with northern Norway seeing as little as four hours of daylight during the winter months 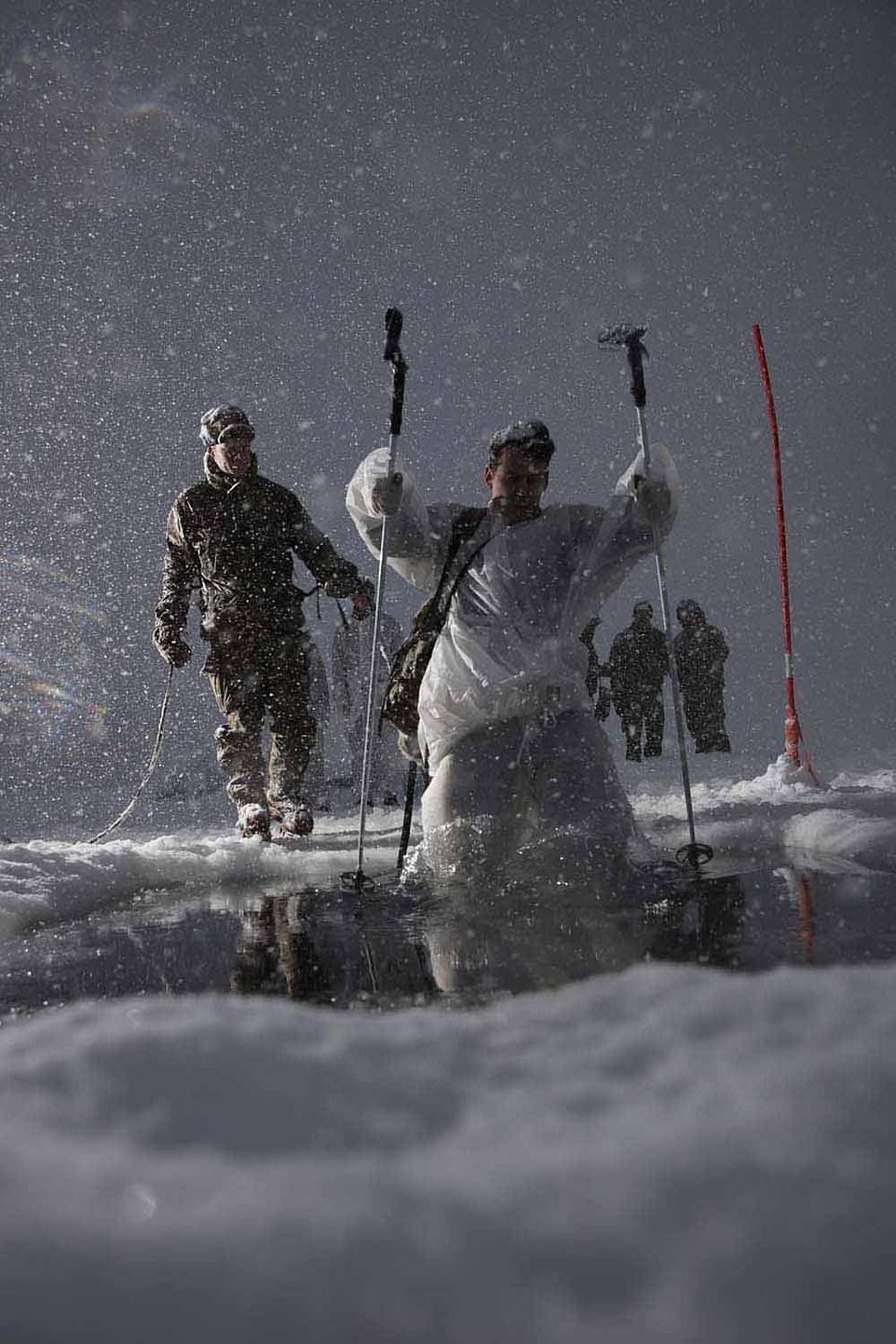 Commandos are wrapped in plastic to try and preserve their body temperature during the incredible ice water exercise, but they can only rely on themselves and a pair of ski poles to get themselves out of the water 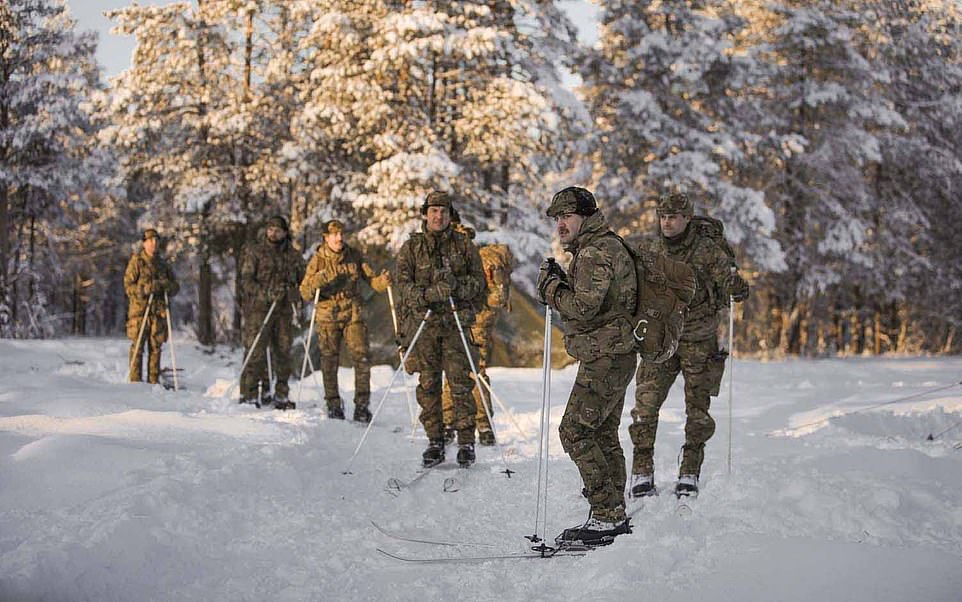 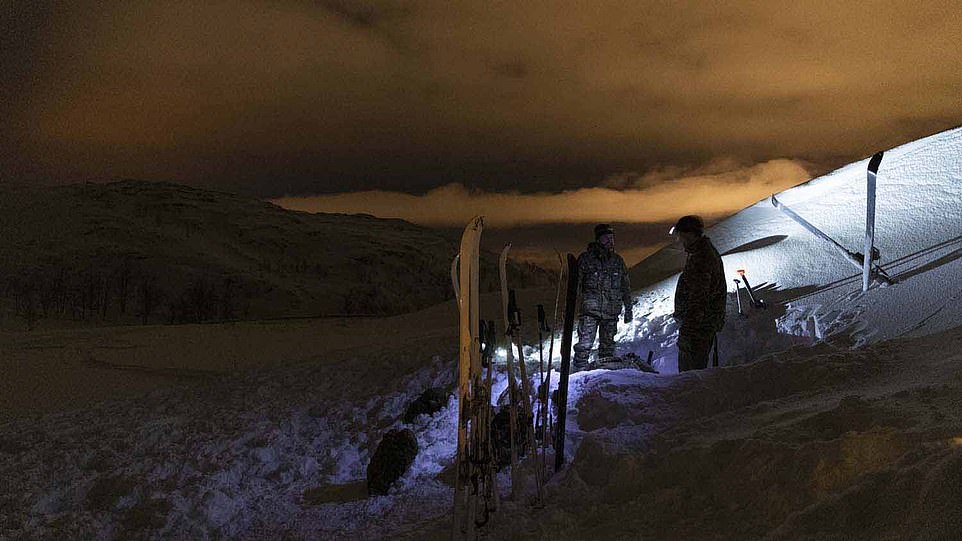 Colour Sergeant Ian Freeman added: ‘All personnel operating in this environment must complete the Cold Weather Survival Course. It represents the bare minimum skill set required to stay alive in a very aggressive environment. The course will form the foundation for everything we do in Norway.’

45 Commando’s Commanding Officer, Lieutenant Colonel Innes Catton, said: ‘As Cold Weather Warfare specialists held at very high readiness, this training is vital to retaining capability to deploy anywhere in the world in the event of crisis and to support our NATO allies in the region.

‘Stringent control measures and quarantine procedures are in place to protect the local population and our people in Norway, as well as our families upon return to the UK.’ 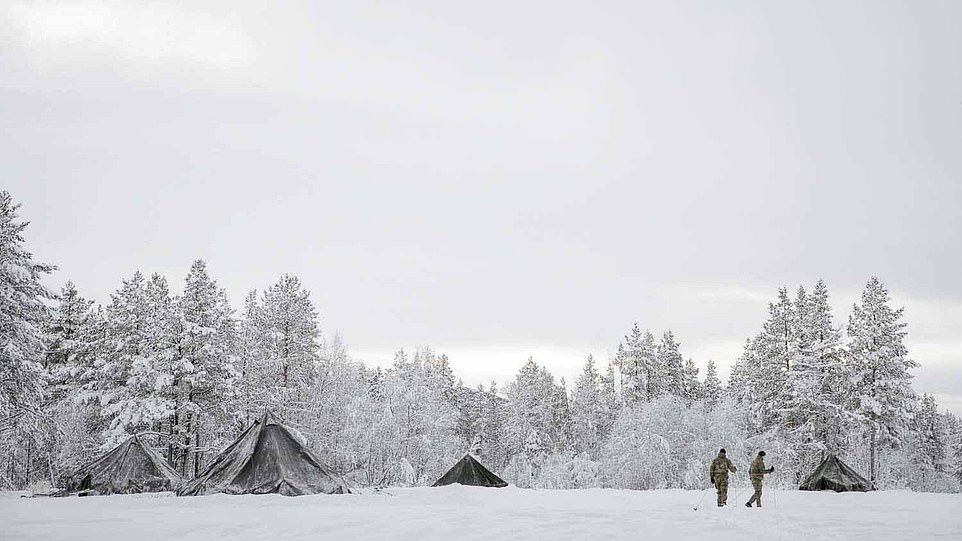 Tents were pitched in blisteringly-cold conditions using wood from a nearby forest. The entire purpose of the exercise is to ensure marines can rely on nature to survive 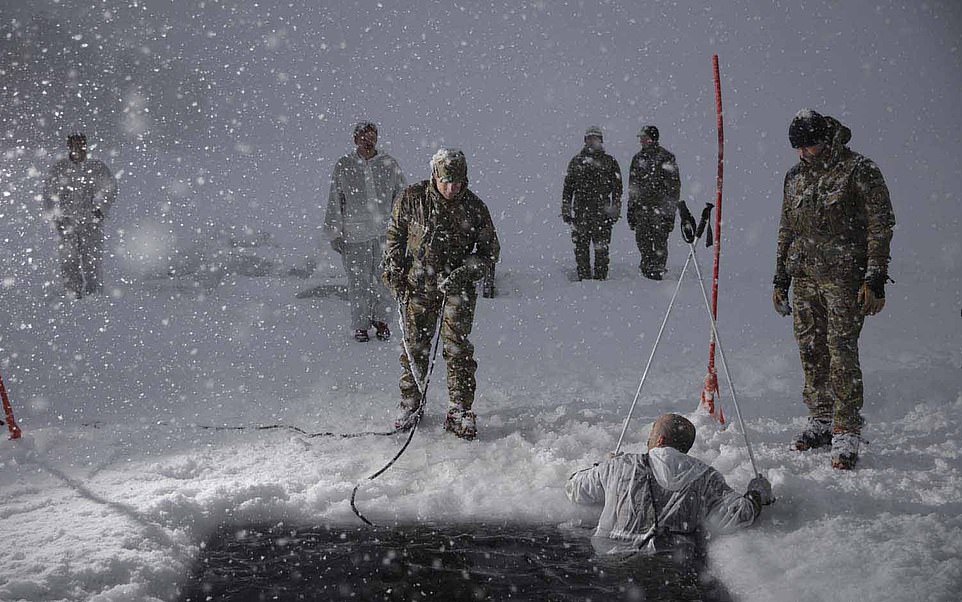 Commandos lined up to plunge into freezing cold waters, as senior officers looked on to see them escape from potentially deadly temperatures 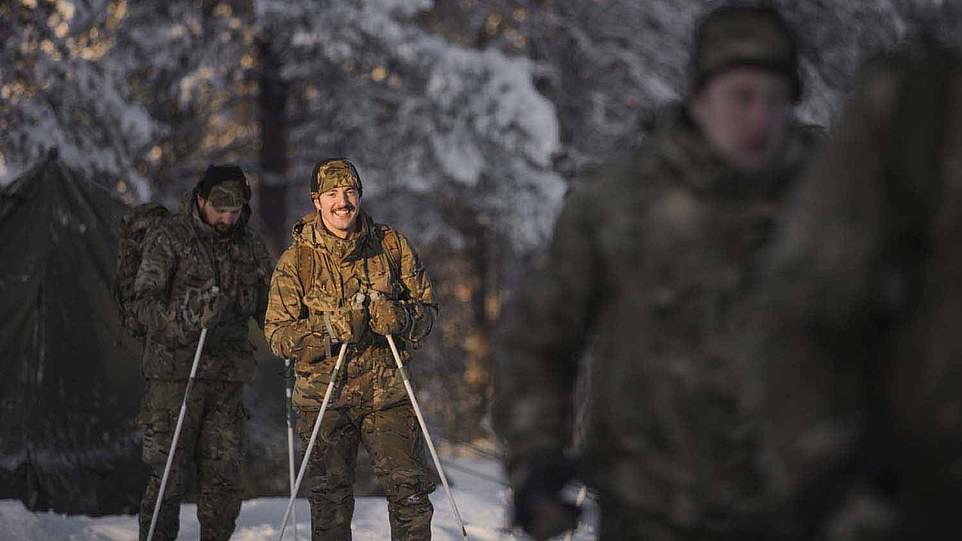 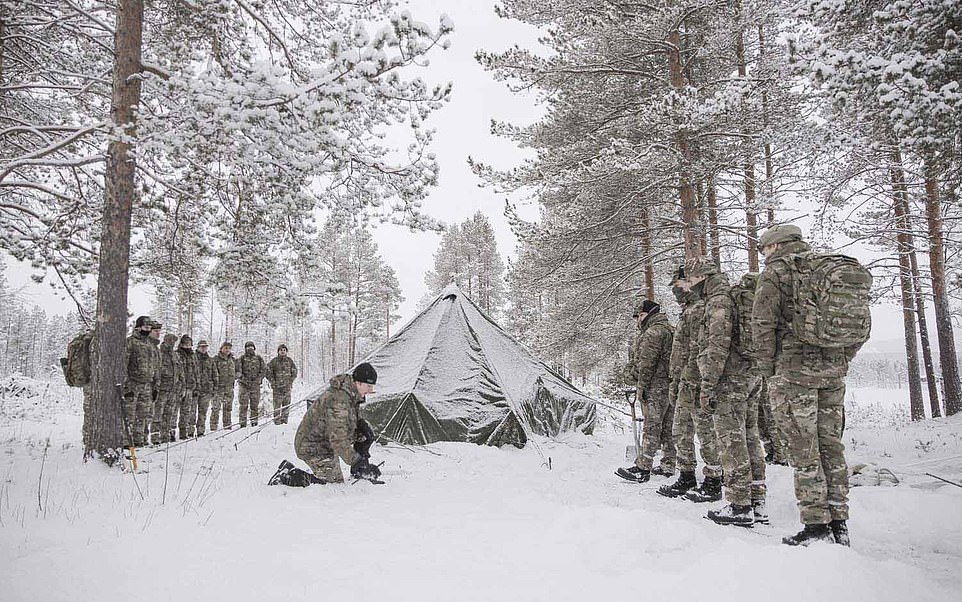 Covid-19 had cancelled training exercises with other countries including Norway, Germany, the US and the Netherlands, but marines went through a rigorous quarantine period to ensure this was safe 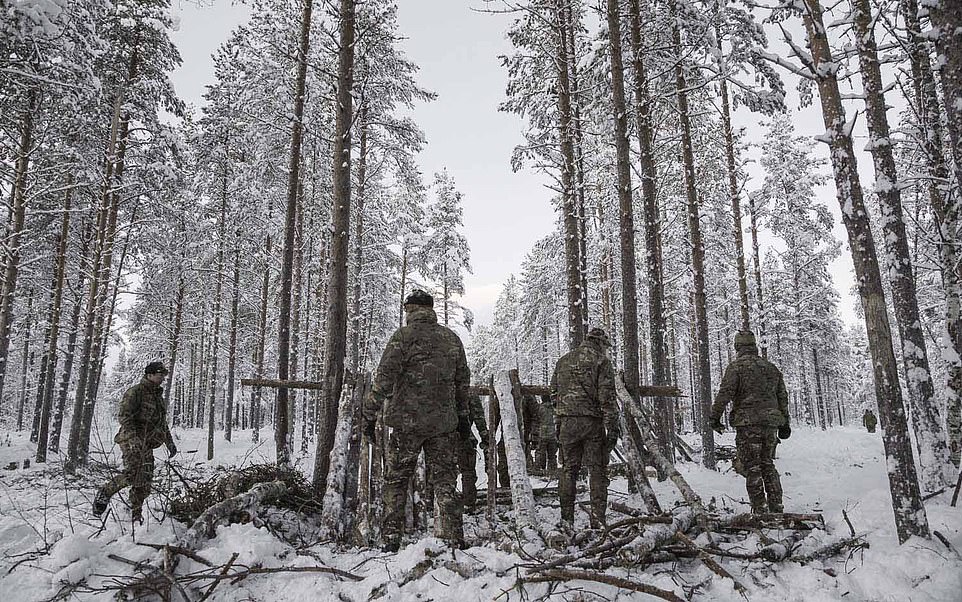 Marines were tasked with working together to chop down wood, before using to build a shelter to brave the elements 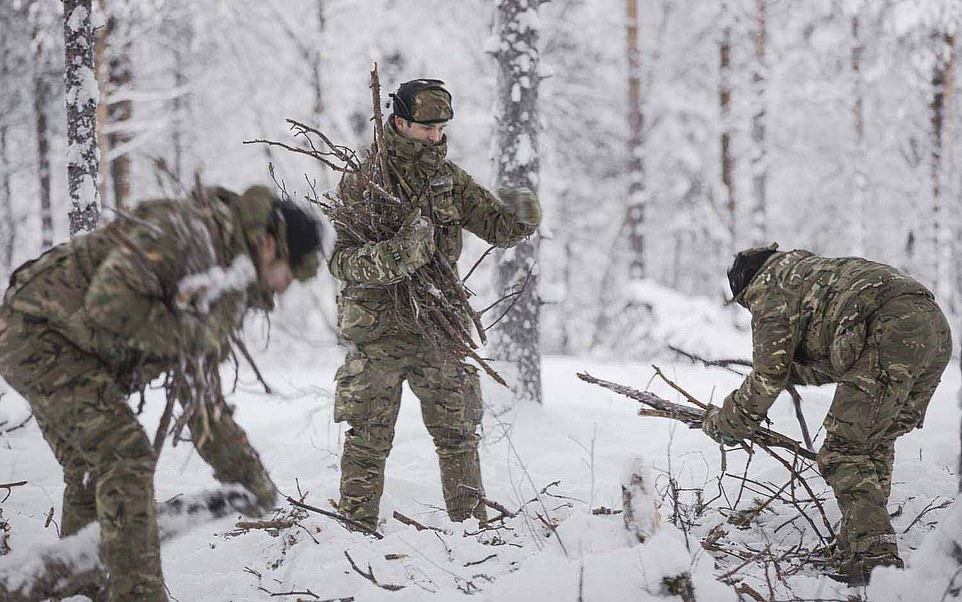 45 Commando’s Commanding Officer, Lieutenant Colonel Innes Catton said: ‘Half the battle is managing the climate and the terrain.’ 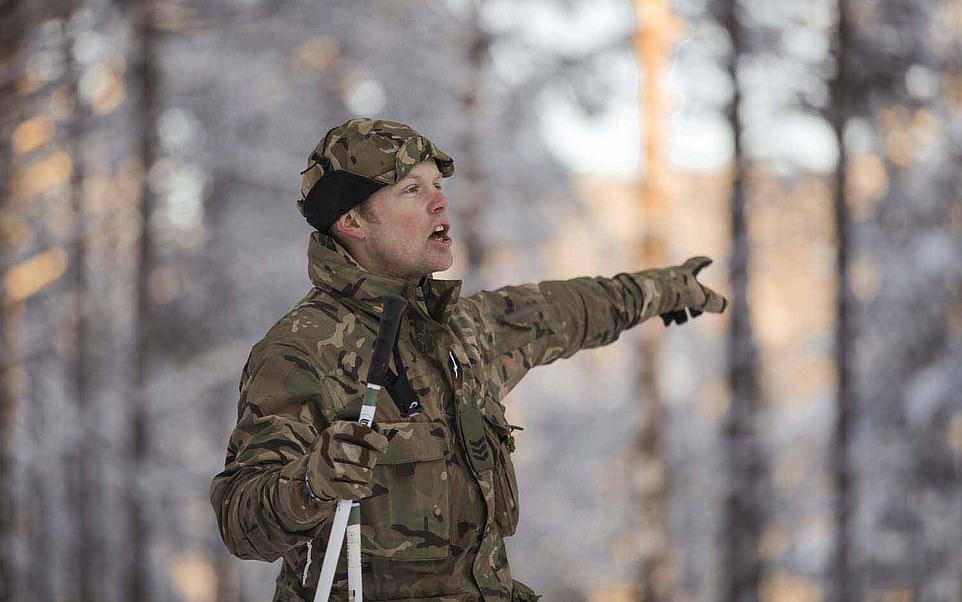 ‘Snow storms can occur suddenly, so learning the basics of survival is key to operating in the Arctic,’ Lt Col Catton added

‘Half the battle is managing the climate and the terrain. Snow storms can occur suddenly, so learning the basics of survival is key to operating in the Arctic conditions.’

In the 1970s and 80s the 45 Commando battalion would spend winters protecting NATO’s northern flank in Norway, while it was also deployed in Northern Ireland.

The battalion’s website states that vital training exercise with forces from Norway, United States, the Netherlands and Germany, have been cancelled due to Covid-19.

However, crucial training has been able to resume in the short-term for those who have been through quarantine.

UK troops were instructed to conduct training in a bubble and in line with the Covid-19 guidelines of host nation, Norway.