A Royal Navy patrol ship has been deployed to shadow a Russian ship through the English Channel.

Portsmouth-based HMS Forth had just returned to UK waters from her first foreign port visit when it was scrambled to monitor the Russian patrol ship Vasily Bykov.

A Navy spokesman said: ‘Forth had departed Gibraltar on July 31, before heading north at speed and conducting heavy weather trials before a quick logistics stop in Devonport. 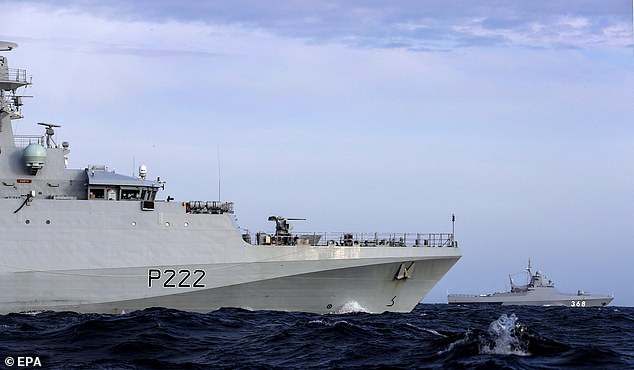 ‘She then sailed and positioned herself ready to meet the Vasily Bykov as the vessel sailed from the North Sea having taken part in Russia’s Navy Days celebration in St Petersburg.’

HMS Forth’s executive officer Lieutenant Samuel Fields said: ‘It has been a particularly busy time for HMS Forth as we generate for deployed operations and continue to test our ship’s capabilities.

‘I am proud of the ship’s company for rising to this additional challenge.’

The Vasily Bykov was previously shadowed by HMS Forth through the UK’s area of interest last month.

The Navy said the Vasily Bykov was previously shadowed by HMS Forth through the UK’s area of interest only last month. 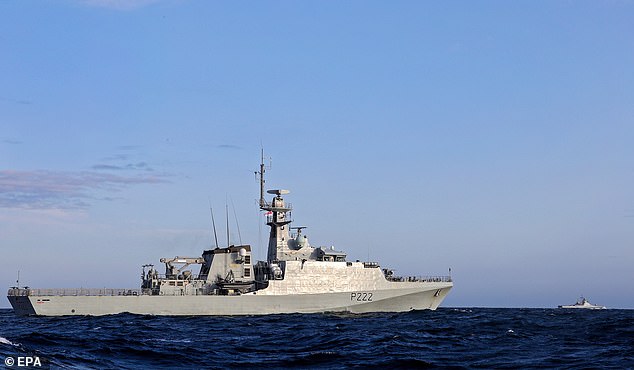 The Vasily Bykov (background) was previously shadowed by HMS Forth through the UK’s ‘area of interest’ only last month, the Navy said

Until then, she remains one of the Royal Navy’s high-readiness units able to conduct maritime security operations in UK waters to help keep Britain safe.

She may be called upon at any time to help prevent arms trafficking, people smuggling, conduct counter-terrorism operations, maritime search and rescue, or monitoring duties.

Frigate HMS Westminster was also deployed during the weekend to shadow the Chinese warship Xian up the English Channel.