Singapore: First, there were the apartment blocks, then came the football team, the mineral water company, the music brand, the amusement parks and finally the electric vehicles.

For 25 years Evergrande built its empire on China’s rapid urbanisation. It timed its ride to the country’s wave of economic growth perfectly. Its newly mobile middle class needed units to live in, music to listen to and stadiums to fill. 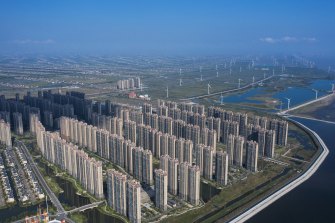 But it never got off the wave of credit that led it to shore. When Chinese regulators and banks decided it was unsustainable last year to keep the endless ride going Evergrande turned to some of its 200,0000 employees. It promised them returns of up to 25 per cent annual interest on a two-year loan if they re-invested in the company.

Evergrande’s model worked as long as it could keep building and selling at an inexorable rate. It would borrow to buy land, get homeowners to buy off the plans, and then borrow again to start another project.

Behind the theme parks and flashy boulevards, the interest bill was mounting. By last July its liabilities had reached 86 per cent of all of its assets. As banks and regulators shunned the group it turned increasingly to short-term solutions with crippling interest rates. 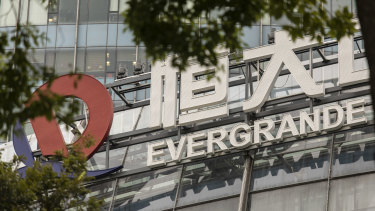 China’s high-profile corporate crackdown of the past six months has been characterised by the targeting of tech giants such as Alibaba, but the tighter regulatory environment for property developers began in earnest last year when the Chinese government introduced its “three red lines” policy, making it harder for the likes of Evergrande to keep borrowing to service its debts.

It had to sell properties quickly and cheaply but in a market filled with investors nervous about a property downturn, it has not been able to find enough buyers. More than 800 projects are now floundering, crippled by cash shortages and construction delays. Chinese media outlet Caixin reported on Monday Evergrande needed $21 billion to complete apartment blocks already underway.

The company owes $171 billion to its suppliers, employees and investors – loans due within the next year – but it only has 10 per cent available in cash. Its debt sheet is more than $400 billion overall, making it the most indebted property company in the world. 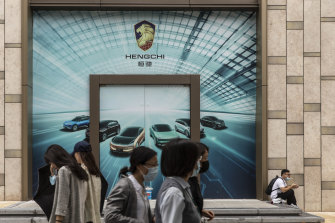 People walking in front of a yet to be opened showroom for China Evergrande New Energy Vehicle Group’s electric vehicles in Shanghai in mid-September.Credit:Bloomberg

The company said on Wednesday that it would make a $50 million coupon payment on its domestic bonds on Thursday. The announcement temporarily eased the market’s anxiety over the crisis coming to a head.

But it faces a larger $115 million interest payment on its overseas bond on the same day and then another $65 million payment next Wednesday. It has not said how it will meet these obligations.

If it fails to settle both by October, it will default leaving thousands of creditors, employees and homeowners out of pocket protesting outside its headquarters. A default could trigger a wider contagion sell-off due to its critical position within the Chinese and international property market.

The Chinese government has been quiet. The purpose of its “three red lines” was to rein in unsustainable debt, the consensus is it does not want to now be seen to be engineering a restructure but it will step in to avoid a broader market collapse.

The Chinese Communist Party has significant powers of persuasion over smaller firms to accept less than what they are owed in the interests of the economy. Likewise, it has tolerated investor protests for longer than expected. These homeowners are unlikely to end up empty-handed but will eventually be expected to compromise out of a sense of national duty.

Oxford Economics economist Tommy Wu said if a restructuring plan works along with stimulus measures, such as easing financial restrictions on local government to accelerate infrastructure investment, he expected “the overall economic and policy outlook to remain contained”.

“But if the financial and economic fall-out of the restructuring becomes substantial, we would expect the government to adjust its currently still tight policy stance on property [by asking banks to extend loan repayments], and perhaps ease the overall macro policy stance, to avoid a sharp economic downturn,” he said.