‘Russia is paying a high price for each advance’: MoD says Ukrainian forces are continuing ‘staunch resistance’ as Putin’s forces try to surround them in the east of the country

Russia is paying a ‘high price’ for each advance it makes in Ukraine according to the Ministry of Defence’s Defence Intelligence update.

The MoD has been issuing daily intelligence briefings to the public to counter Kremlin disinformation surrounding the invasion in Ukraine.

Vladimir Putin’s invasion plan has been wrecked by the determined opposition put up by the Ukrainian armed forces and public, who are forcing the Russians to fight for every inch of land. 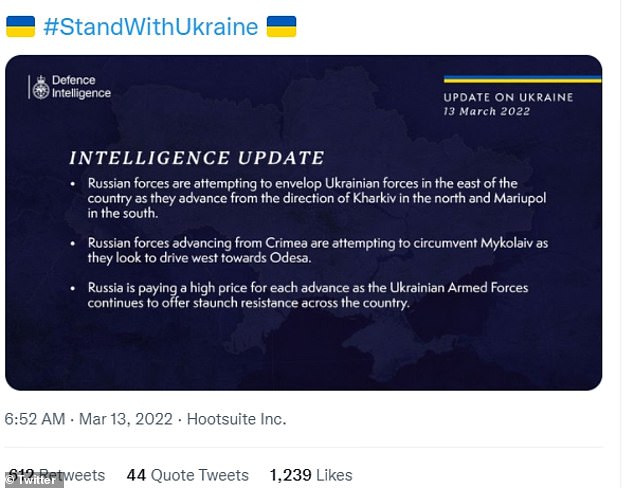 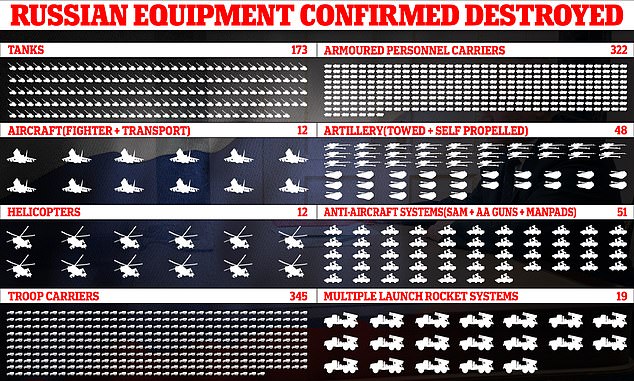 Pictured: A graphic showing Russian army equipment that has been visually confirmed as destroyed by Oryx – a military blog that is tracking Moscow’s losses during its invasion of Ukraine. Oryx says its figures are based on ‘photo or videographic evidence. Therefore, the amount of equipment destroyed is significantly higher than recorded here’ 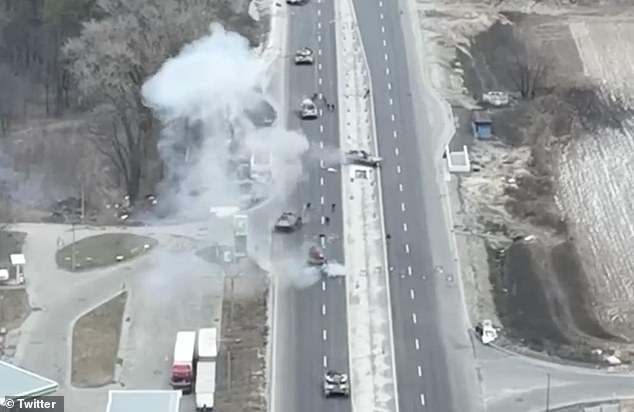 According to the latest briefing: ‘Russian forces are attempting to envelop Ukrainian forces in the east of the country as they advance from the direction of Kharkiv in the north and Mariupol in the south.

‘Russian forces advancing from Crimea are attempting to circumvent Mykolaiv as they look to drive west towards Odesa.

‘Russia is paying a high price for each advance as the Ukrainian Armed Forces continues to offer staunch resistance across the country.’

The full scale of losses suffered by Putin’s armies are unknown, but Ukraine has claimed it has destroyed over 12,000 troops, 350 tanks, 80 helicopters, 125 artillery units, 1,150 personnel carriers and almost 60 planes.

Figures based on visual confirmations by military tracking website Oryx suggest over 1,000 Russian vehicles have been destroyed, damaged, abandoned or captured in the war. 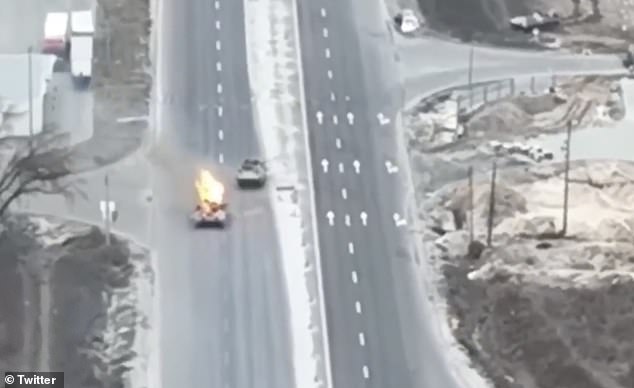 According to Oryx’s figures as of March 11, Russia has lost 1,034 vehicles, of which 424 were destroyed, 13 were damaged, 159 were abandoned by Russian troops and 438 were captured by Ukraine’s forces.

Analysts on Friday warned that Russian tank commanders had effectively allowed the Ukrainians to ambush their unit by driving down the middle of a main road leading into Kyiv – and straight into a death trap.

The devastating artillery strikes came as Putin’s troops inched closer to Kyiv, and saw a number of Russian T-72 tanks and other vehicles destroyed or routed in the surprise attack from the front and back of the convoy.

Ukrainian forces surprised the column that included some 30 tanks and support units, as well as a fearsome TOS-1 thermobaric launcher, forcing survivors to flee and left Russia mourning the loss of another senior commander.

Ukraine’s masterful ambush in Brovary piled on the misery of Moscow’s invading forces, which has suffered more losses than expected and are now facing freezing temperatures in the coming days. Morale is said to be low.

While reports said Russia’s 6th tank regiment escaped with relatively minimal casualties, Russian commander Colonel Andrei Zakharov was reportedly killed, and his unit forced into a retreat. The smouldering wrecks of Russian tanks lay on streets after the fighting.

Defence experts have been left stunned by Russia’s military tactics

Franz-Stefan Gady – an analyst at the International Institute for Strategic Studies – said the ‘fight shows the danger of not securing urban terrain with adequate infantry plus recon. assets when main elements of a force pass through urban terrain ideally suitable for ambushes.’

The Russian column was ‘on an obvious avenue of approach, and they still decided to bunch up like this, leaving them more vulnerable to indirect fire,’ he wrote on Twitter, while sharing drone footage of the strikes. 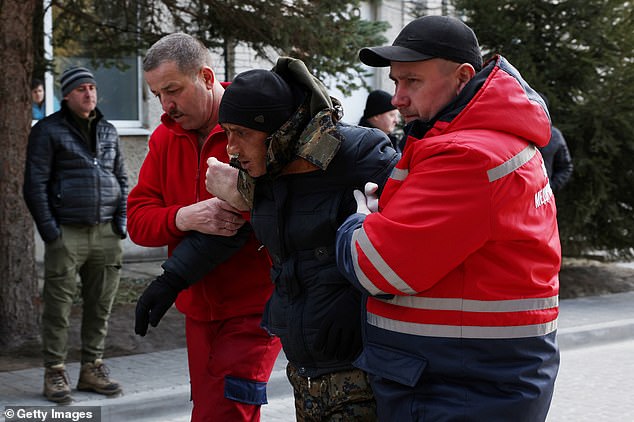 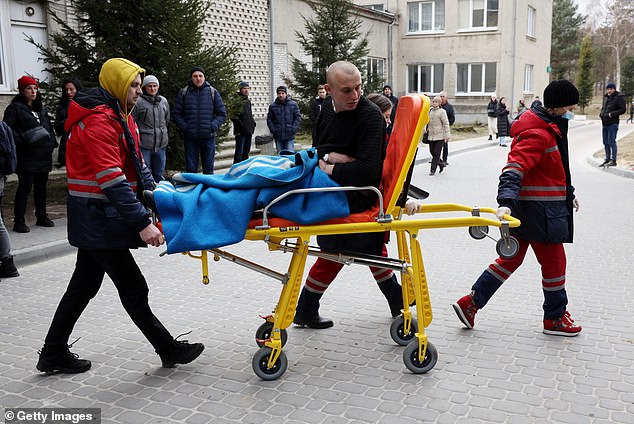 Ukraine says 57 people have been wounded in the attack on the base, which is located between Lviv and the border with Poland. Pictured above is a young man thought to have been hurt in the attack

Last night, Russian forces fired up to 30 cruise missiles at a military base only 20 miles from the Polish border killing 35 and injuring 134.

The military training ground outside the western city of Lviv is hosting some foreign military trainers and had previously been used for exercises involving Ukrainian and NATO troops.

Lviv governor Maksym Kozytskyi said most of the missiles fired Sunday ‘were shot down because the air defense system worked.’

The ones that got through through killed at least 35 people and wounded 134, he said.

The military base in Yavoriv, located some 25 miles northwest of the city, was a training centre for Ukrainian forces with foreign instructors, including from the United States and Canada.

It was also a hub for joint exercises of Ukrainians soldier with NATO allies.

Ukrainian Defence Minister Oleksiy Reznikov said ‘foreign instructors work here,’ although it was unclear whether any were present during the attacks.

Foreign troops left Ukraine shortly before Russian launched an invasion of its pro-Western neighbour on February 24.

The United States said on February 12 that it withdrew 150 of its instructors from Ukraine.

Reznikov condemned the bombardment as a ‘new terrorist attack on peace & security near the EU-NATO border’, calling for the imposition of a no-fly zone.

‘Action must be taken to stop this. Close the sky!’ he wrote. 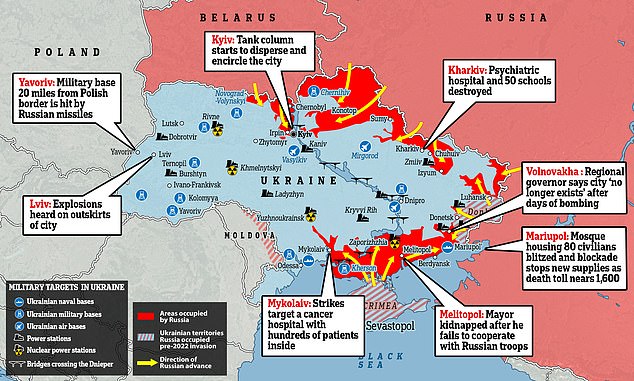 According to preliminary information, around 30 cruise missiles were fired from Russian planes located over the Black Sea, which had flown out from the southern Russian city of Saratov, Lviv’s mayor said.

They said the missiles were fired ‘probably from the waters of the Sea of Azov or the Black Sea’.

Russia the same day warned that its troops could target supplies of Western weapons to Ukraine.

Many Ukrainians have fled to relative safety in Lviv since the launch of Russia’s invasion.

Meanwhile, Leonid Volkov, the former chief of staff to jailed Russian opposition leader Alexei Navalny claimed Vladimir Putin will ‘destroy the world’, if he is not stopped.

He told Sophy Ridge on Sunday: ‘It is now very clear that enormous cost has to be paid to stop this war.

‘There are all the sanctions, of course, they also create a burden on the European economy that is quite clear. But this cost has to be paid because otherwise Putin will just destroy the world.’

Asked if President Putin would use nuclear weapons, Mr Volkov replied: ‘As he is crazy enough, we can expect unfortunately everything.’

He had earlier said the war feels ‘enormously painful’, adding: ‘I want to cry. Putin is president of Russia. This is Putin’s war, not my war. I am trying to cry as loud as possible and I ask my fellow compatriots to cry.