Observatory group says at least 68 attacks hit area near where fighter jet was shot down in early hours of Sunday. 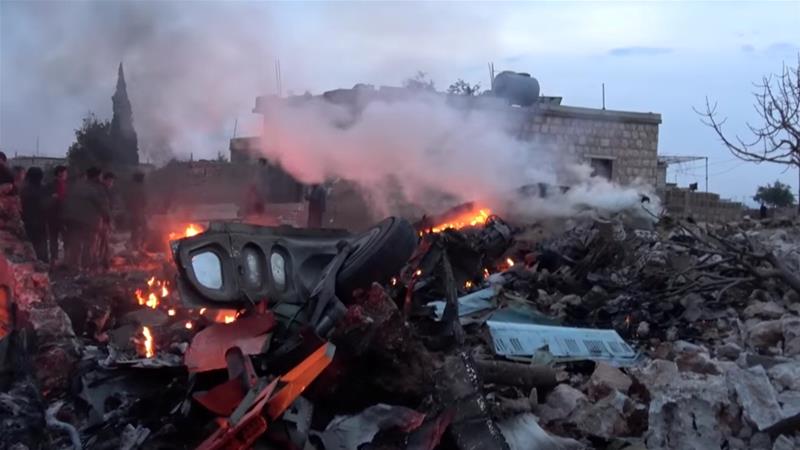 Russia has launched a series of air attacks in the area where one of its fighter jets was shot down by Syrian rebels on Saturday, leaving dozens of fighters and civilians dead, according to Syrian activists and Russian officials.

The Syrian Observatory for Human Rights (SOHR), a UK-based monitor of Syria’s civil war, said at least 68 attacks hit Idlib province in the early hours of Sunday morning, following about 35 attacks on Saturday.

It said at least five people had been killed and thousands of civilians had fled the area to avoid getting caught up in the bombardment.

The White Helmets, an opposition rescue group, reported 21 civilian deaths in villages surrounding the site of the downed Sukhoi 25 jet, but it was unclear whether its toll included those on the SOHR tally.

Earlier, the Russian defence ministry claimed to have killed at least 30 fighters in air attacks, who it said were responsible for shooting down the fighter jet.

The pilot of the Sukhoi was killed after being ejected from the aircraft by rebel fighters, including members of the Hay’et Tahrir al-Sham group, commonly known as Tahrir al-Sham.

The group is spearheaded by the former al-Nusra Front, which used to be al-Qaeda‘s branch in Syria.

Analyst Richard Weitz of the Hudson Institute told Al Jazeera it was too early to say how exactly the plane was brought down.

“Some reports say it was brought down by machine-gun fire. There’s a couple of reports out there saying it was shot down by a missile but rebels are not known to have surface-to-air missiles with this kind of range,” he said.

The Russian plane was shot down above Idlib province, which is one of the so-called de-escalation zones set up in Syria last September in an effort to scale back the conflict.

However, bombardments from Syrian government forces and their Russian allies have continued.

Hospitals, markets and bakeries across Idlib province, believed to be the largest remaining rebel-held area in Syria, have been hit by government air raids.

Tens of thousands of civilians have fled the area, which is home to more than two million people, most of them internally displaced.