Russian web designer jailed for 25 years for the rape, murder and beheading of a 20-year-old student he met on a night out in Siberia, then spreading her body parts across the city 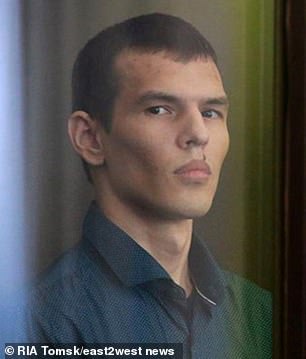 Alexander Altapov, 30, was sentenced on Christmas Day to 24-and-a-half years in prison

A Russian man was jailed on Christmas Day for almost 25 years for the rape, murder and beheading of an architectural student in the presence of his girlfriend.

The girlfriend will face a later trial amid testimony that she assisted him in disposing of dismembered body parts and covered up the horrific crimes.

The head of Viktoria Povesma, 20, was found in botanic gardens in the Siberian city of Tomsk.

The architecture student went to the flat of freelance web designer Alexander Altapov, 30, in the presence of his girlfriend Ekaterina after going out with friends – but was unaware he had been jailed previously for sex attacks.

In a law enforcement video the evil Altapov uses a manikin to show detectives how he killed Povesna after raping her twice in his flat ‘in front of his girlfriend’s eyes’ as she ‘sat on the sofa’.

He later dismembered his victim in the bath of his flat.

Altapov in the company of his girlfriend, who was named only as Ekaterina, put her body parts in plastic bags which he hid around the city, the court was told.

Viktoria’s worried parents had called the police in July last year sparking a search after she had failed to return home from her night out.

Her severed head was later found in the botanic gardens before other body parts were found in dumps elsewhere.

He killed her after she threatened to go to police to accuse him of rape, the court was told.

Viktoria Povesma, a 20-year-old architectural student, vanished in July last year after meeting Altapov on a night out with friends 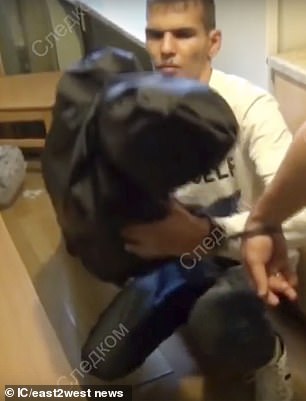 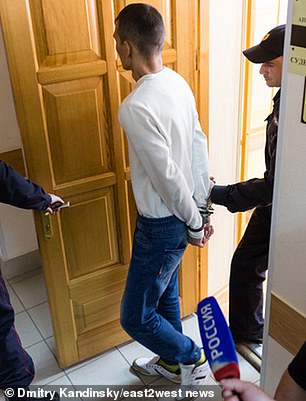 In an earlier hearing judge Anastasia Kartseva told the court: ‘During a quarrel with the victim, and aiming to kill her, he squeezed her neck with his hands until she until she ceased to show signs of life.

‘Having committed this crime, he used a knife, dismembered her and scattered the body parts in different areas of Tomsk.’

Citing law enforcement sources, local media Vtomske reported that ‘the suspect raped the girl and she threatened to go to police.

‘He got scared, killing and dismembering her.’

Altapov testified that his girlfriend had been with him when he met Povesma, and had been in his flat when he committed the crimes.

She was present, too, when he disposed of the body parts, say law enforcement sources.

In his late teens he had been jailed for ‘violent acts of a sexual nature’ against a victim aged under 14, say local reports.

Later he was imprisoned again for viciously attacking a girlfriend and stealing her bag.

But it is believed that Povesma did not know his violent history when she went to his flat. 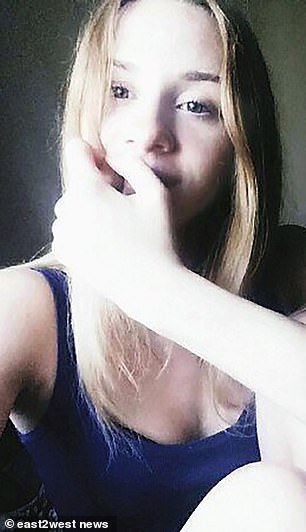 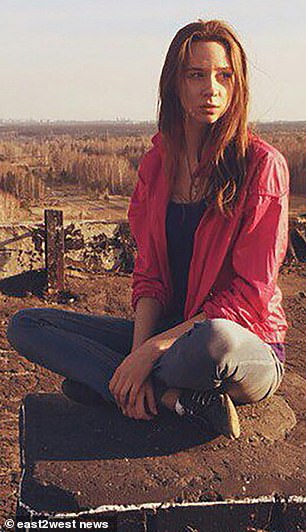 Another woman had claimed that she had been attacked by Altapov who ‘suffocated me to the point of unconsciousness’ after forcing his way into her flat.

She also reported the man had a blonde girlfriend who was aware of his violence to her but had tried to protect him.

Police had not followed up her complaint about Altapov, she said.

A court yesterday sentenced Altapov to 24-and-a-half years in prison after a closed door hearing.

His girlfriend will face a charge of concealing a serious crime, which could lead to a jail sentence, say law enforcement sources.