Russian and Ukrainian troops are locked in intense close-quarter combat today in the eastern Ukrainian city of Severodonetsk as Moscow’s soldiers, supported by intense shelling, attempted to gain strategic footholds in the region while facing fierce Ukrainian resistance.

Ukrainian regional officials reported that Russian forces were ‘storming’ the eastern city in the Luhansk region, where the fighting has knocked out power and mobile phone services and terrorised civilians who have not fled.

Severodonetsk, a manufacturing hub, has emerged as an epicentre of Russia’s quest to conquer Ukraine’s industrial Donbas region.

Russia also stepped up its efforts to take nearby Lysychansk, where Ukrainian officials reported constant shelling.

The two cities, with a combined pre-war population of around 200,000, are the last major areas under Ukrainian control in Luhansk province, which makes up the Donbas together with neighbouring Donetsk.

Putin’s troops are focused on capturing parts of both not already controlled by pro-Moscow separatists and have made painstakingly slow but steady advances as their heavy artillery eats away at Ukrainian positions, allowing infantry to slowly creep forward.

In his Saturday night video address, Ukrainian President Volodymyr Zelensky described the situation in the east as ‘very complicated’ and ‘indescribably difficult’.

The ‘Russian army is trying to squeeze at least some result’ by concentrating its attacks there, he said.

Severodonetsk Mayor Oleksandr Striuk said there was fighting at the city’s central bus station on Saturday, thwarting any evacuation attempts from the transport hub.

A humanitarian centre was unable to operate due to the danger, he said, and mobile phone services and electricity were knocked out. Residents also reportedly risked exposure to shelling to get water from a half-dozen wells.

Some supply routes were functioning, and evacuations of the wounded were still possible, Mr Striuk said.

But he estimated that 1,500 civilians in the city, which had a pre-war population of around 100,000, have died from the fighting as well as from a lack of medicine and diseases that could not be treated. 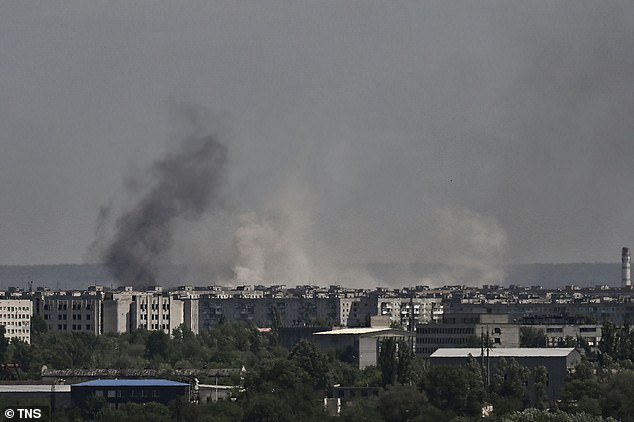 Smoke and dirt rise from the city of Severodonetsk, during shelling in the eastern Ukrainian region of Donbas 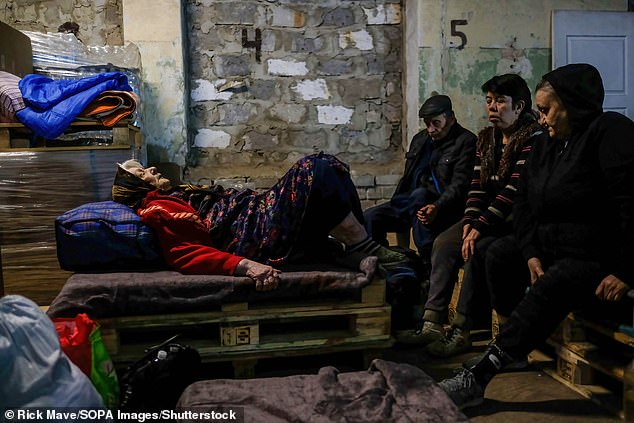 An injured woman lays on a wooden pallet inside the centre for distribution of humanitarian aid in Severodonetsk. Ukrainian regional officials reported that Russian forces were ‘storming’ the eastern city in the Luhansk region and terrorising civilians still living there 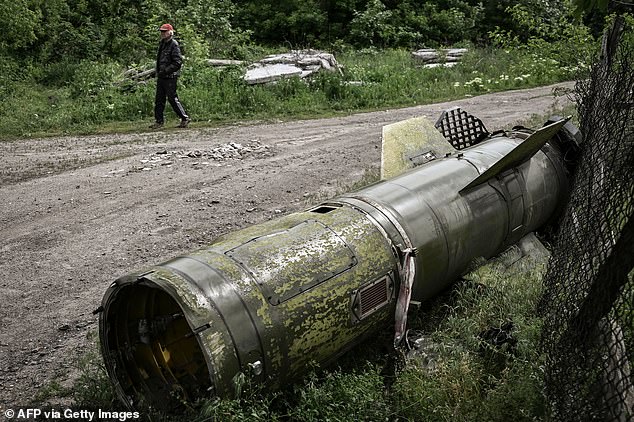 A man walks near the remains of a missile in the city of Lysychansk, in the eastern Ukrainian region of Donbas, on May 26, 2022 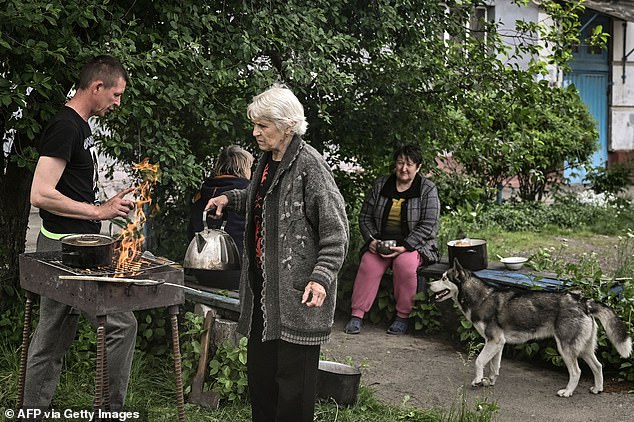 Residents of the city of Lysychansk cook food outside their houses, as the city is without electricity and water, in the eastern Ukrainian region of Donbas, on May 26, 2022 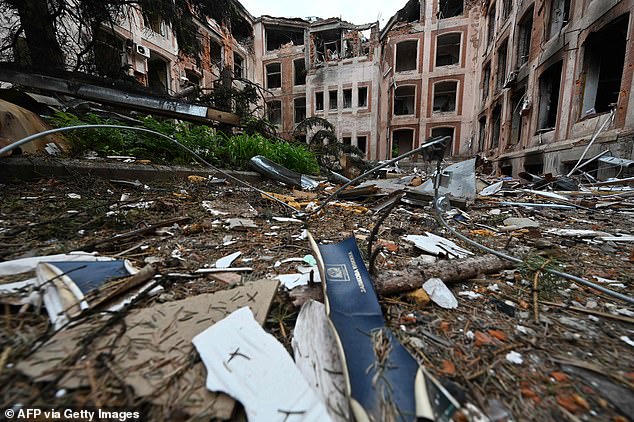 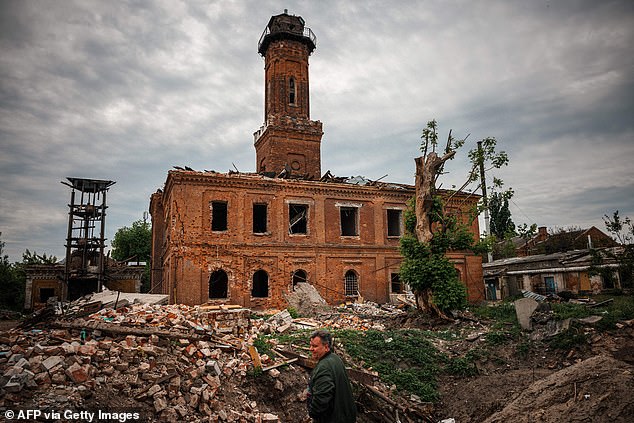 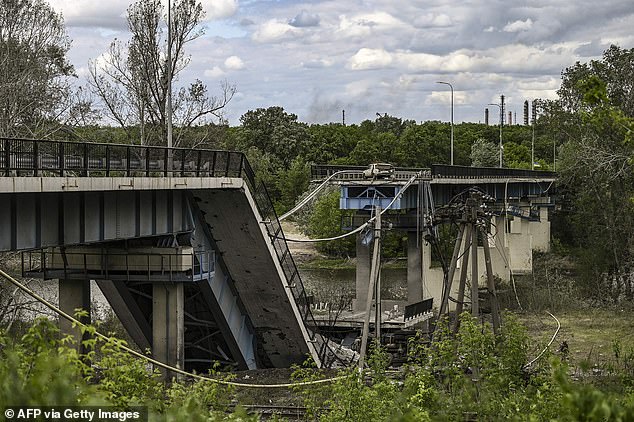 Regional governor Serhiy Haidai claimed the Russians had retreated ‘with losses’ around the village of Bobrove, around 12 mile (20km) south-east of Severodonetsk, but were carrying out air strikes on a nearby village on the strategic Siversky Donetsk river.

‘The situation in Lysychansk is severe due to constant shelling by the occupiers; there are fatalities and wounded people,’ he wrote on Telegram.

On Saturday one civilian died and four were injured when a Russian shell hit a high-rise apartment building, according to Haidai. A local cinema and 22 other residential buildings were also damaged, he said, before adding that fighting is now advancing street-by-street in the city.

The governor said the sole road link to the outside world was expected to be the focus of continued Russian attacks.

‘Next week will be very hard, as Russia puts all its resources into seizing Severodonetsk, or cutting off the (area) from communication with Ukraine,’ he announced.

The Ukrainian military said on Sunday morning that Russian forces were also trying to strengthen their positions around Lyman, a small city that serves as a key rail hub in the Donetsk region.

‘The enemy is reinforcing its units,’ the Ukrainian armed forces’ General Staff said in an operational update. ‘It is trying to gain a foothold in the area.’

Moscow claimed on Saturday to have taken Lyman, announcing the city had been ‘entirely liberated from Ukrainian nationalists’, but there was no acknowledgement of that from Kyiv authorities.

Ukrainian news outlets and Telegram channels continued to suggest the battle for the city was still underway.

‘It is hard to fight when you are attacked from 70km away and have nothing to fight back with… we need effective weapons,’ Podolyak posted on Twitter.

Zelensky voiced hopes in a late-night video address that Ukraine’s allies would provide needed weapons, adding that he expected ‘good news’ in the coming days. 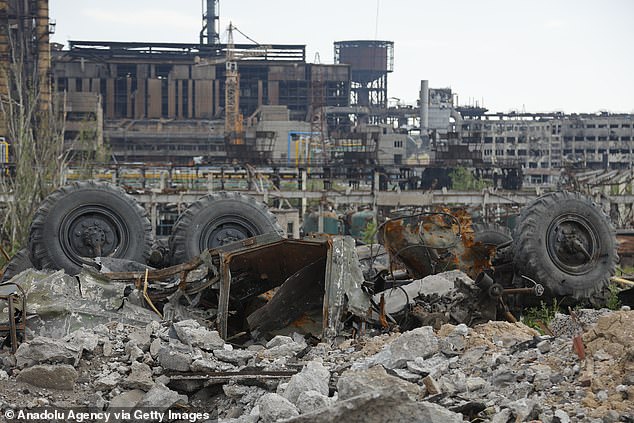 A view from damaged sites amid Russian attacks in Mariupol, Ukraine on May 27, 2022 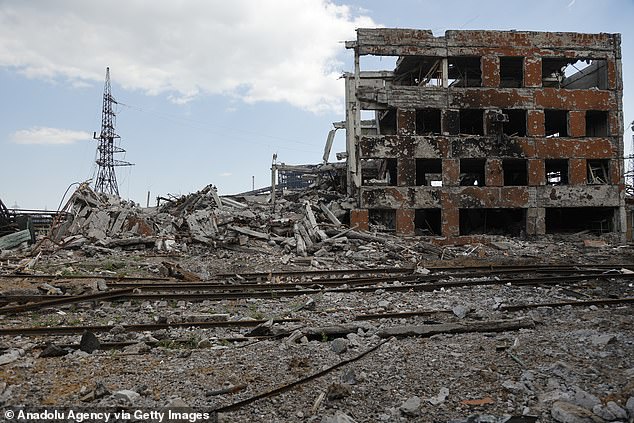 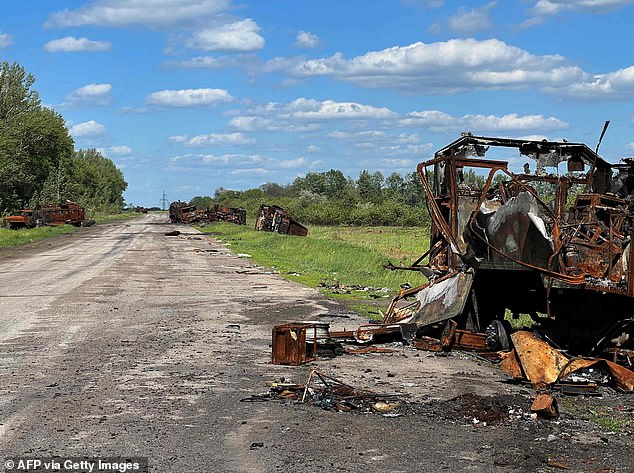 This photograph taken on 27 May 2022, shows Russian military vehicles destroyed on a road near the village of Kutuzivka, Kharkiv region, amid the Russian invasion of Ukraine 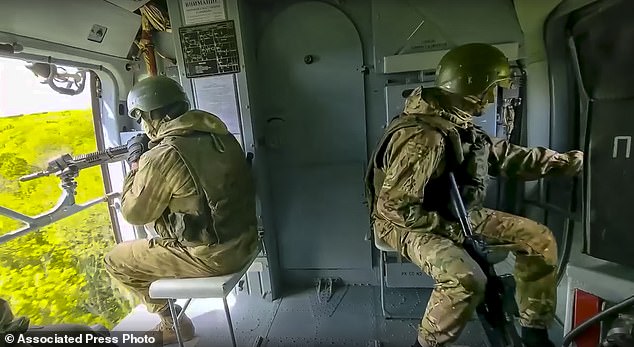 The Ukrainian army said heavy fighting was continuing around Donetsk, the provincial capital.

It also said Russia had launched an offensive on Saturday night around the city of Bakhmut, in the neighbouring Luhansk region, but had been pushed back.

In the same operational update, the military hinted at high levels of casualties sustained by Moscow, claiming that civilians were no longer being admitted to hospitals in Russia-annexed Crimea as beds were needed by injured troops – though these claims have not been verified.

Meanwhile, adviser to the mayor of the decimated port city Mariupol reported that one of the city’s supermarkets close to the Azovstal steel plant is being used as a mass morgue because there are too many bodies to bury after three months of near constant bombardment.

Petr Andryushchenko said Russian troops were dumping civilian bodies in the Shchirii Kum supermarket and leaving them to rot, and posted a harrowing picture of decomposing corpses lying in the aisle on his Telegram channel.

‘In the premises of the supermarket the Russians set up a morgue. Literally. The Russians are bringing the bodies of the dead here, which they washed away when they tried to restore the water supply.

‘They just dump them like garbage. There is a catastrophic shortage of people to bury and operate even makeshift mortuaries, to such an extent that a separate recruitment campaign of pathologists was launched in Moscow.’

He said the photo, which captured partially decomposed and rotting bodies piled up together and only partially wrapped in clothing, represented a ‘visual demonstration of inhumanity’. 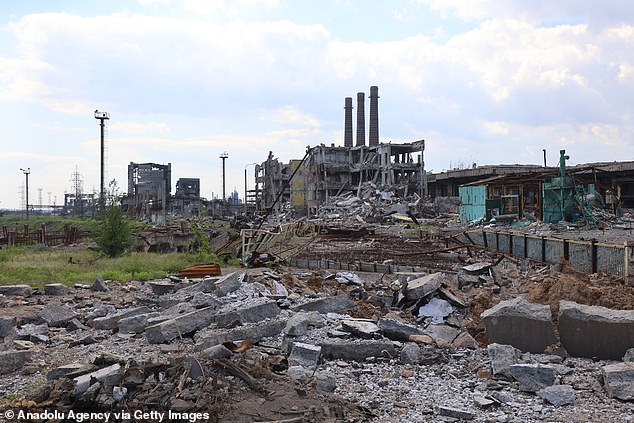 A view of damaged territory of Azovstal plant is seen in Mariupol, Ukraine on May 27, 2022 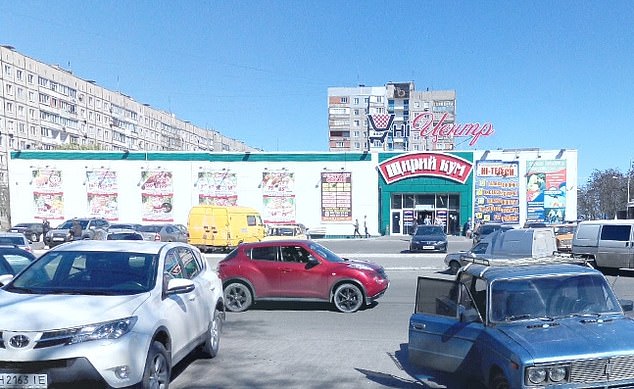 Petr Andryushchenko, adviser to the mayor of Mariupol, said Russian troops were dumping civilian bodies in the Shchirii Kum supermarket and leaving them to rot because the losses are so high and there are not enough people to dig graves and operate mortuaries

The State Emergency Service of Ukraine said on Sunday morning that Russian shelling had caused fires around Kharkiv, the country’s second-largest city.

Russia has kept up a bombardment of Kharkiv, located in north-eastern Ukraine, after Ukrainian fighters pushed its forces back from positions near the city several weeks ago.

The Kharkiv regional prosecutor’s office said a Russian shell broke through the roof of a house in the town of Zolochiv, around 20 miles (40km) north-west of Kharkiv, early on Sunday, injuring a 50-year-old man and a 62-year-old woman.

The Ukrainian Border Guard Service said border areas in the Sumy region, east of Kharkiv, were hit with six unguided missiles. The agency did not mention reports of any casualties.

The two European leaders also ‘insisted on an immediate ceasefire and a withdrawal of Russian troops’ in an 80-minute phone call with the Russian leader on Saturday, the German chancellor’s office said.

In return, the Kremlin said Putin would be ‘open’ to resuming talks with Kyiv, but did not mention any possibility of direct negotiations between the leaders of the warring nations.

Zelensky previously said he was not ‘eager’ for talks after weeks of having his repeated calls for negotiations aired, but recognised they would likely be necessary to end the conflict. 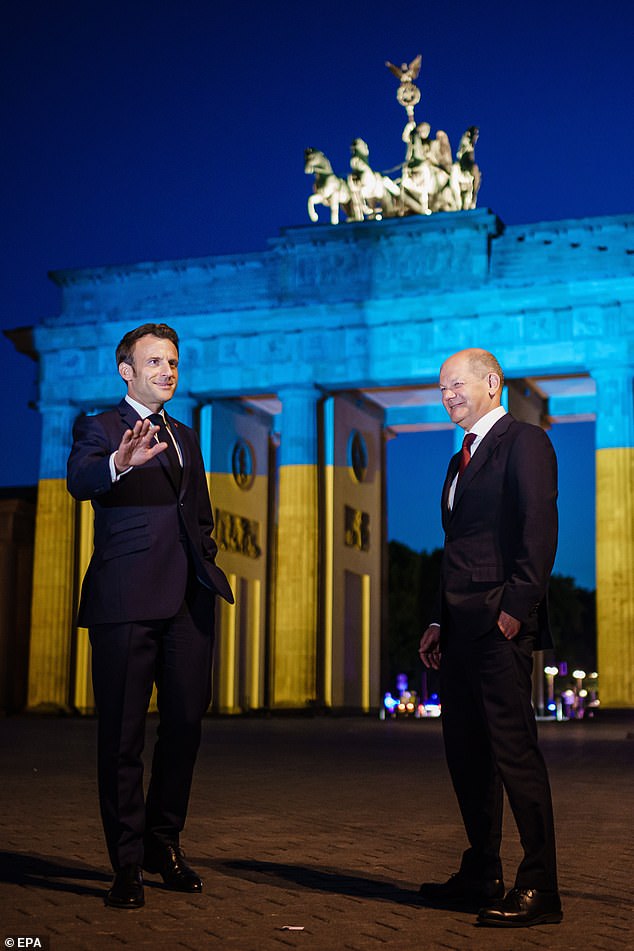 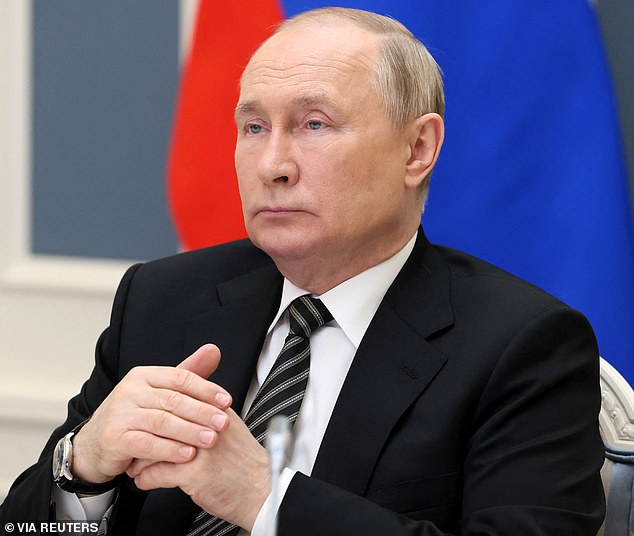 The Kremlin said Putin would be ‘open’ to resuming talks with Kyiv, but did not mention any possibility of direct negotiations between the presidents of the warring nations

In their call with Putin, Scholz and Macron also pointed to a looming global food security crisis.

In addition to capturing key ports such as Mariupol, Russia has used its warships to cut off other cities still in Ukrainian hands, blocking grain supplies from being transported out.

Russia and Ukraine supply about 30 percent of the wheat traded on global markets.

Russia has tightened its own exports and Ukraine has vast amounts stuck in storage, driving up prices and reducing availability across the globe.

Putin has repeatedly rejected any responsibility, instead blaming Western sanctions.

But on Saturday, he told Macron and Scholz that Russia was ‘ready’ to look for ways to allow more wheat onto the global market.

‘Russia is ready to help find options for the unhindered export of grain, including the export of Ukrainian grain from the Black Sea ports,’ the Kremlin quoted him as saying.

He also called for the lifting of sanctions to allow ‘an increase in the supply of Russian fertilisers and agricultural products’ to the global market.

Britain’s Ministry of Defence tweeted that Moscow’s attempts to barter for a reduction in the severity of sanctions was testament to their efficacy in crippling Russia’s economy.

‘Russia’s attempt to achieve a reduction in the severity of international sanctions also highlights the stresses sanctions are placing on the regime,’ the tweets read.