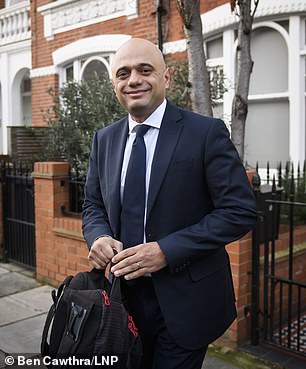 Sajid Javid wants EU immigration to Britain slashed by 80 per cent after Brexit, claims about the planned policy paper on the UK border say

Sajid Javid wants EU immigration to Britain slashed by 80 per cent after Brexit, claims about the planned policy paper on the UK border say.

The Home Secretary’s long-awaited immigration plan is due to be published this week.

Curbs will include applying £30,000 minimum salary requirements to mid-skilled workers – though as many high skilled people are expected to be allowed to come as want to.

The number of low-skilled people staying long term is expected to plunge to almost nothing.

This is still not enough to meet the long-standing Tory pledge to get immigration down to the tens of thousands. Net non-EU migration ran at 248,000 people in the most recent figures.

A source told the Sunday Times: ‘We are going to take full control over who can come to the UK, prioritising those with the skills the UK needs rather than on the basis of which country they come from.’

Under the proposals revealed by the paper, the number of medium-skilled workers entering the country will plummet from 18,500 to around 4,500, while most of those with low skills are expected not to come at all on a long-term basis.

The changes will also include no cap on highly-skilled migrants moving to the UK from anywhere in the world.

Those deemed medium-skilled will need to earn at least £30,000 a year – unless they are moving for a role in particularly high demand with a lower salary.

Low-skilled workers will be granted short-term visas for up to a year, provided they are from a country associated with a ‘low risk of immigration abuse’. 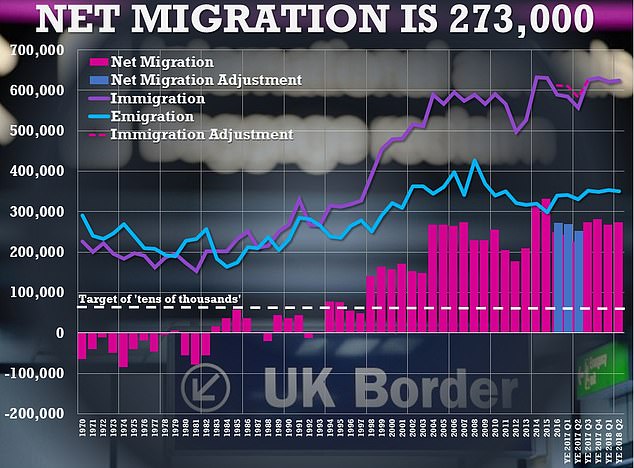 Net immigration to Britain rose to 273,000 in the first half of 2018 despite a continued fall in arrivals from the EU according to ONS data out last month (pictured)

Elsewhere, students will be granted six months of study leave and will be free to apply for a skilled worker visa in the three months before the end of their studies.

Earlier this month, Mr Javid said: ‘This is the biggest change in our immigration system in over four decades.

‘(It is) the most significant change we’re going to see in immigration as we take control of our immigration system, so it’s important that we work on the details, that we listen to people, to businesses and others and we get the details right.’

The Home Secretary said the new immigration system would be based on skills, and not the nationality of people.