Riyadh: Saudi Crown Prince Mohammed bin Salman has reportedly blamed Iran for the attack on two oil tankers in the Gulf of Oman.

In an interview with pan-Arab newspaper, Al-Sharq al-Awsat, the crown prince charged that the Iranian regime attacked the ships, one of which was Japanese, during Japanese Prime Minister Shinzo Abe's visit. 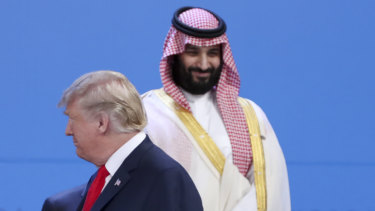 "The Iranian regime did not respect the Japanese prime minister's visit to Tehran, and while he was there replied to his efforts by attacking two tankers, one of which was Japanese," he said.

Salman urged the international community to take a "decisive stand".

The Saudi crown prince also said that his country does not want war. "But we won't hesitate to deal with any threat to our people, our sovereignty, our territorial integrity and our vital interests," he added.

Meanwhile crew members rescued from a Norwegian-owned oil tanker, the other vessel that was hit by an explosion, arrived in Dubai, the owners and managers of the Front Altair said.

After being rescued on Thursday by the Hyundai Dubai after an explosion and fire on the tanker, the crew were taken to Iran.

The company had earlier said the 23-strong crew comprised 11 Russian nationals, one Georgian and 11 Filipinos.

Robert Hvide Macleod, chief executive of Frontline Management, praised the captain's decision to evacuate the ship and saluted "the captain and the crew who performed very professionally in a difficult situation."

Meanwhile, a specialist team has arrived at the Front Altair to "inspect the vessel for a full assessment of the condition and damage," the statement said.

The tanker was on Saturday towed out of Iranian waters and reported to be in the Gulf of Oman.

The company earlier said it did not know what caused the explosion, but said it had ruled out "mechanical or human error".

The Japanese tanker, the Kokuka Courageous, was struck twice on Thursday.

The incidents have led the United States to point the finger at Iran, risking an escalation in already fraught tensions in the region. Tehran has denied any involvement.

The Iranian Foreign Ministry called in British Ambassador Rob Macaire on Saturday to submit "a few explanations," state news agency IRNA reported, a day after British Foreign Secretary Jeremy Hunt echoed the US in blaming Iran for the attacks.

The head of the ministry's Europe department told Macaire that Hunt's "anti-Iranian" statement was "unacceptable."

Hunt, without any evidence, had "hastily and blindly" repeated US allegations against Iran, the European commissioner said. Macaire will forward the Iranian protest to London, IRNA reported.

A British foreign ministry official said the report was wrong and the ambassador has not been summoned.

Back in May, the United Arab Emirates said that four commercial vessels were sabotaged in an incident off the coast of Fujairah, including two Saudi oil tankers. US Secretary of State Mike Pompeo blamed Iran for those attacks as well.

"The intelligence collected before the operation and the accurate choosing of targets … these capabilities are not available to outlawed groups … this is an accurate operation that was carried out by a state," he told a joint news conference with his Bulgarian counterpart Ekaterina Zaharieva.

"However, we have not decided that there are evidences that refer to a certain country," he added.

Frontline said the incident will be thoroughly investigated by the company along with third parties, including government officials.