A COUPLE who'd been married for 50 years died of Covid within 12 hours of each other.

May Cropley, 71, refused further treatment after she watched husband John, 73, lose his battle against the virus. 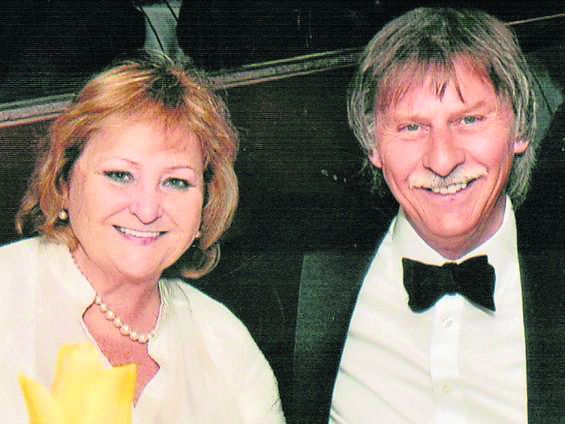 The couple, from Auchtermuchty, Fife, ran a business together and were committed Christians who served in ministry together.

Tragically they caught Covid together, and sufferedd together in a shared a hospital room at Ninewells Hospital, Dundee.

When John died in front of May she made the heartbreaking decision to refuse her own treatment.

Singing Amazing Grace, 12 hours after her husband passed away, May also died.

Last week they were laid to rest together.

May Cropley was the daughter of Tommy Townsend and his wife Cathy from Glasgow.

With only one older brother, Gordon, she moved to Portsmouth as a teenager where her dad served as A chaplain in the Royal Navy.

Introduced by her father, May met her future husband – who had joined the Navy at 15 as a telegraphist – when he was invited to live with her family.

Janet McKay, May's cousin, said: "Uncle Tommy was well known for always bringing back people to the house who needed help. John was one of them. A lost soul at the time."

Originally from Lincolnshire, in his own words John wrote: "I sailed around the world and spent most of my time drunk and doing the things sailors do. However, throughout this I had a deep sense of wrong – a sense of judgment."

He went on to say that, one night in HMS Mercury's Signal School, a man spoke to him about God.

Little did he know that man would be his future father-in-law and that a life in ministry beckoned for him too.

In Spring 1971 John and May were married.

Now a devout Christian himself, John tied the knot with May quicker than expected.

On her own website May wrote: "I met John and we fell in love.

"I was so thrilled that I had met someone who loved the Lord as much as I did.

Dealing with health issues would repeatedly be part of the Cropleys' story but at this point in their lives their focus was on training for ministry.

The pair began work as missionaries with the Royal Sailors' Rest for 10 years, two of those in Singapore.

They also studied at Trinity College in Bristol before John was ordained as pastor at Calvary Evangelical Church in Brighton.

In later years they would take on a church in Sunderland before returning home to work for the Scottish Christian Alliance.

He was also chaplain for Rosyth naval base for a time.

While John and May's ministry would take them all over the world, on returning to Fife they bought a house in Auchtermuchty and began working to help homeless people in Glenrothes.

May managed the Gilven House Project, which is now under the management of Fife Council, and John was assistant director at the Alliance.

"I had the pleasure of working with May when she was the manager for the supported accommodation for young homeless women for many years," said John Mills, head of housing services with Fife Council.

"She was committed and passionate in her support for the young residents and to ensure that they could always move on to their own tenancy and to take advantage of education and training opportunities.

"She, with John's strong support, went the extra mile to make a big difference to young people using Gilven House."

In 2008, May started becoming unwell. It would take 18 months of tests to reveal she had a rare form of cervical cancer – the treatment of which also took its toll on her body – as well as discovering she had an autoimmune condition called Good's syndrome making her more susceptible to illness.

May wrote: "This may not have been what I would have chosen for my life but wherever the will of God leads me, the grace of God will keep me."

The pair moved into a lodge in Largo, where John discovered he had a form of vasculitis affecting his lungs.

Janet said: "They both had these underlying health conditions but they remained so faithful.

"John was still preaching until a few weeks ago."

On his website, Fife Pulpit by the Sea, recordings of John's sermons can be heard up until July.

At that point their health problems, combined with Covid, took hold.

After shielding for more than a year, May went out for lunch to celebrate the 60th birthdays of two of her cousins while John was in need of oxygen delivered to their home.

"They don't know how they caught it, but from getting it to becoming really ill it was only a matter of days," said Janet.

"I had just seen May, and we had talked on the phone. I knew they were feeling ill with it, but I was shocked to get the message to say they had gone into hospital.

"May was fine when I had spoken to her last but then in the early hours of Tuesday July 13 I got a text that said they had been taken to Ninewells."

They were in a room together and, on Wednesday, Janet received an update that John's condition had worsened.

A good friend of the couple, Emma McHale, who was part of the same Christian community as the Cropleys, visited.

"Just two years ago John gave me away at my wedding, and because my husband recently died, May was worried their situation would be too much of a burden, so she asked Emma to be their person to contact.

"By Wednesday evening John had passed. I couldn't believe it."

On Thursday morning Emma got a call to say they wanted to move May to the high dependency unit.

Janet said: "As I understand it, May refused the treatment. They called for the hospital chaplain, who knew them both, and as they sang Amazing Grace, she slipped away.

"I really can't believe it. Covid took John and 12 hours later she went with him."

John and May, who celebrated their golden wedding earlier this year, were laid to rest in Upper Largo Cemetery in a plot beside May's older brother Gordon.

Janet added: "I will miss them both terribly. May was older than me and so I've known them both my whole life. John was so funny. He had a wicked sense of humour. And May was so kind. "

Committed to his faith until the end, in one of his final website posts, John wrote: "He is God and can do what He wants, when He wants and where He wants. If He couldn't then He would not be God. I am deeply grateful to Him for changing my life."