Going, going, gone with the wind! Shoppers and commuters struggle to stay on their feet as they are hit by 122MPH Storm Eunice blast

Commuters were seen being blown across the road in London today as Storm Eunice brought record winds to Britain.

Meanwhile, pictures from across the country showed people clinging onto signs and trees to try and stay upright, while one woman was seen taking a tumble while trying to negotiate a pedestrian crossing.

Most people appeared to be enjoying themselves despite the tricky conditions, with plenty of smiles and laughs amid the chaotic scenes.

The top speed of 122mph at Needles on the Isle of Wight today is provisionally the highest gust ever in England and means Storm Eunice is now worse than the 1987 Great Storm when gusts peaked at 115mph in West Sussex.

Today’s warnings run from 7am until 12pm in the South West and 10am to 3pm in the South East with forecasters concerned over ‘flying debris resulting in danger to life’ as well as ‘roofs blown off and power lines brought down’.

Hundreds of schools were closed, all trains in Wales were suspended and rail passengers across England were told not to travel amid mass cancellations as the Army was on standby for what could be the worst storm since 1990. 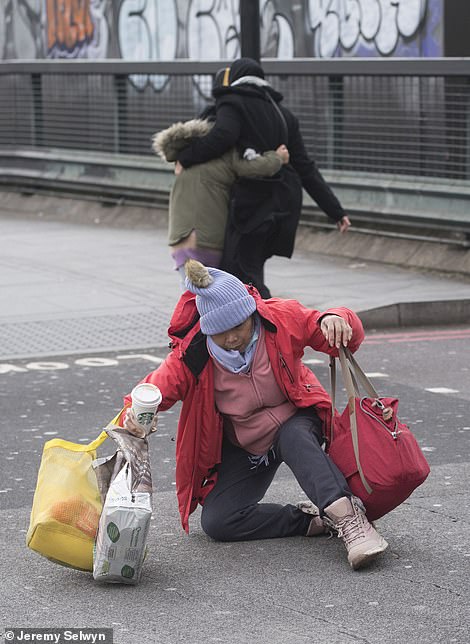 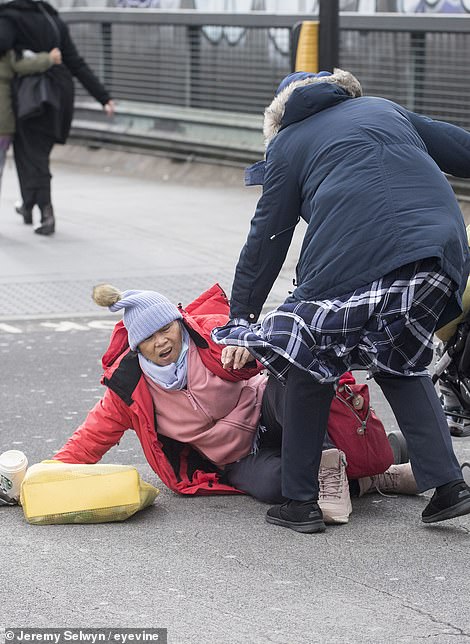 Taking a tumble: A shopper struggles to negotiate a pedestrian crossing on London’s Euston Road, and is rescued by a passer by 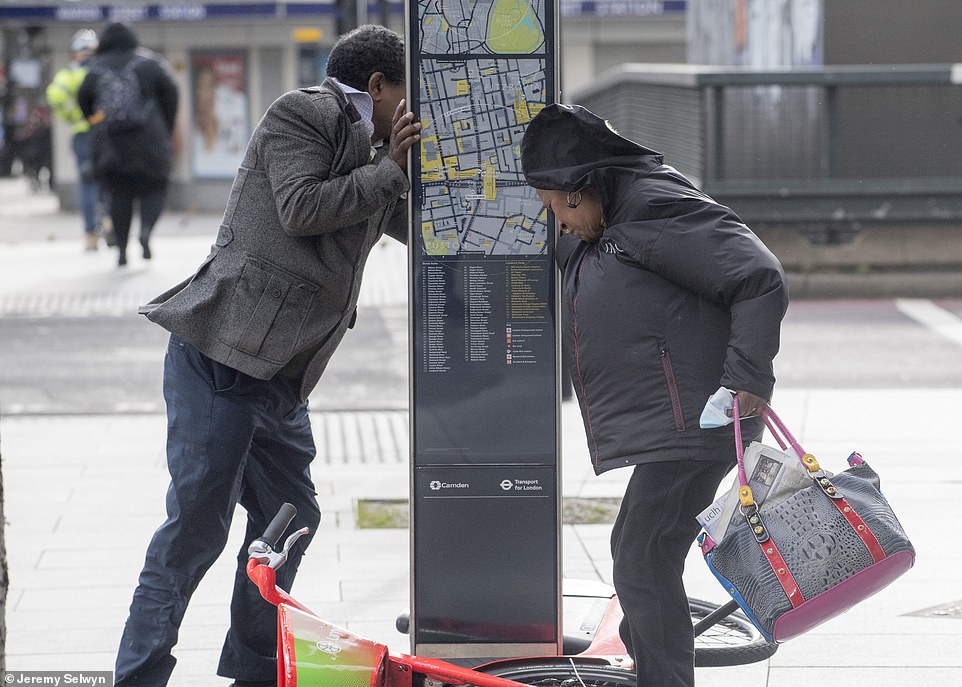 Pedestrians grip onto a street sign on Euston Road in an attempt to stay upright, while next to them an electric hire bike lies on its side on the pavement

In London, large parts of the white covering on The O2 in Greenwich could be seen flapping in the strong winds today.

Witness Mala Sharma said ‘more and more parts are getting ripped off’, adding ‘it’s going to be a safety issue for people around’. Ms Sharma said it happened ‘right in front of my eyes’ and that the damage ‘started off with a patch’ but then a ‘chunk’ of the roof on the building, formerly known as the Millennium Dome, ripped off.

Two lorries were blown over on the M4 in South Wales and shocking footage filmed in Bude, Cornwall, showed the storm taking down a huge tree which crashed onto a park. There was also major disruption at London’s airports.

British Airways cancelled more than 130 flights at London Heathrow and City airports, motorists were warned only to make essential journeys and major attractions closed including the London Eye, Kew Gardens and Legoland.

Aviation analytics firm Cirium said at least 436 flights to, from or within the UK were cancelled today. The highest proportion was at Heathrow, where 20 per cent of flights were cancelled – followed by London City (16 per cent).

Network Rail said all of London’s main train stations will likely temporarily suspend all services for a few hours this afternoon, with Waterloo having already stopped all services due to the large number of trees on the tracks. 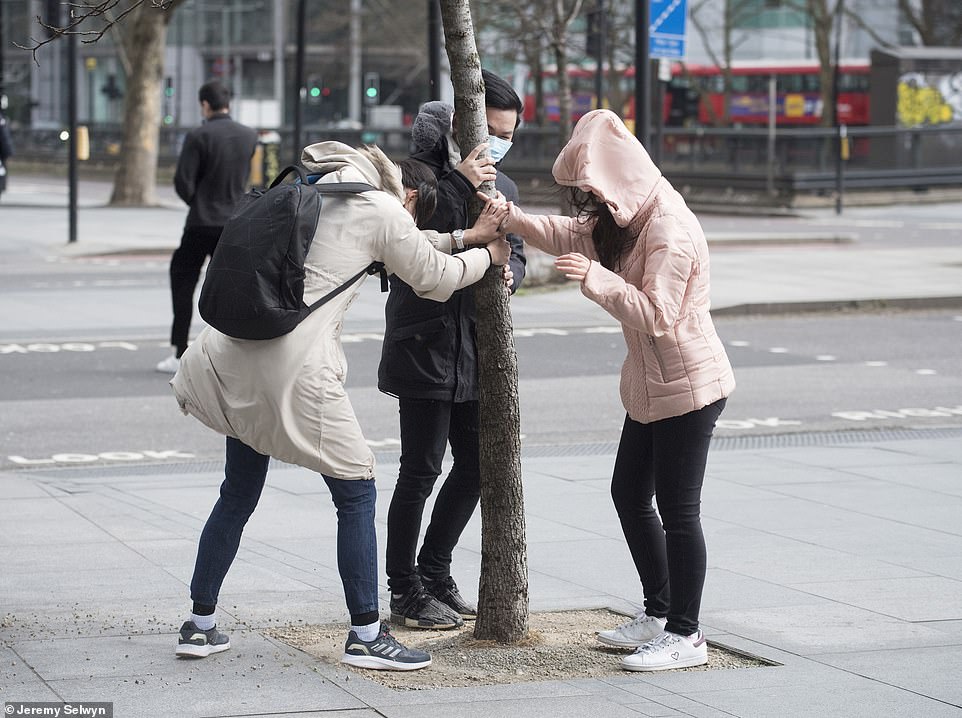 Three people grip onto a tree on Euston Road. The top speed of 122mph at Needles on the Isle of Wight today is provisionally the highest gust ever in England 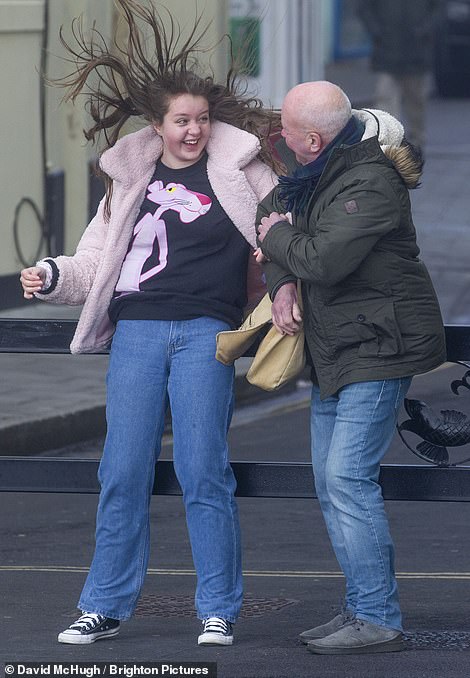 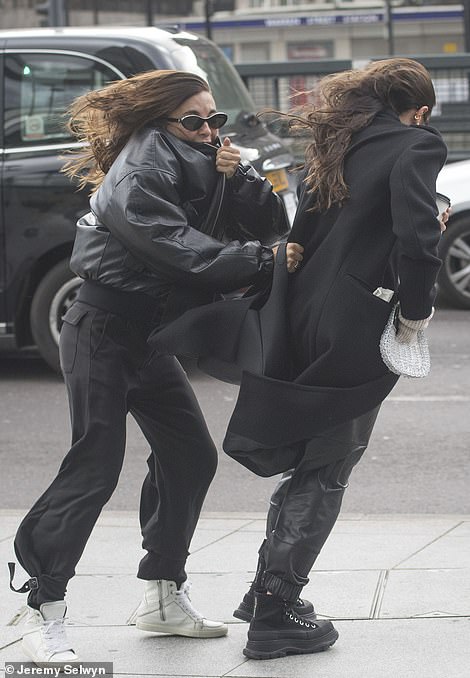 Most people appeared to be enjoying themselves despite the tricky conditions, with plenty of smiles and laughs amid the chaotic scenes (pictured are Brighton, left; and London, right) 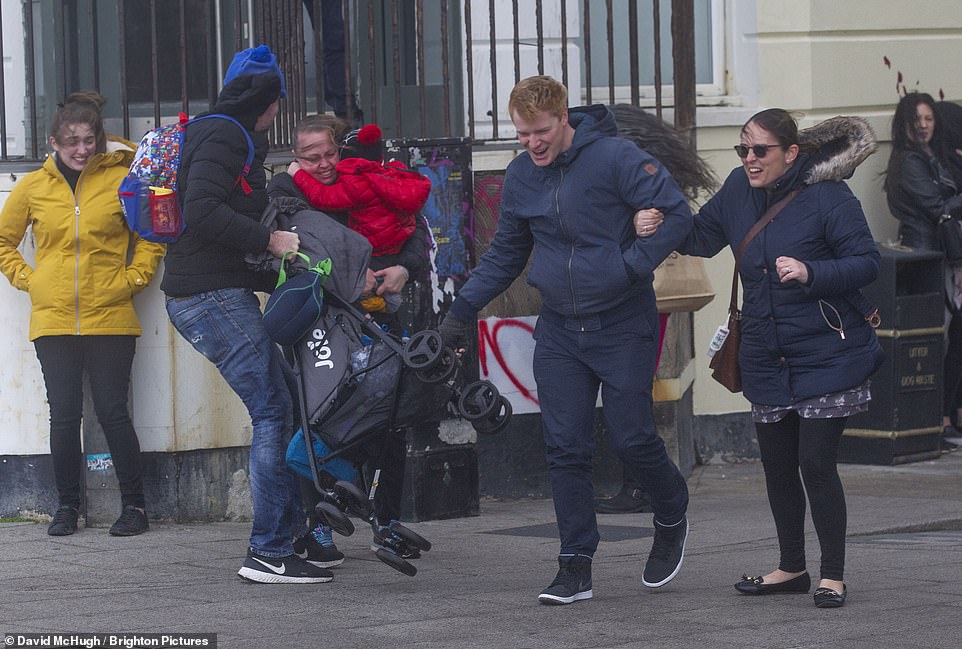 Today’s warnings run from 7am until 12pm in the South West and 10am to 3pm in the South East with forecasters concerned over ‘flying debris’. Pictured is Brighton this lunchtime 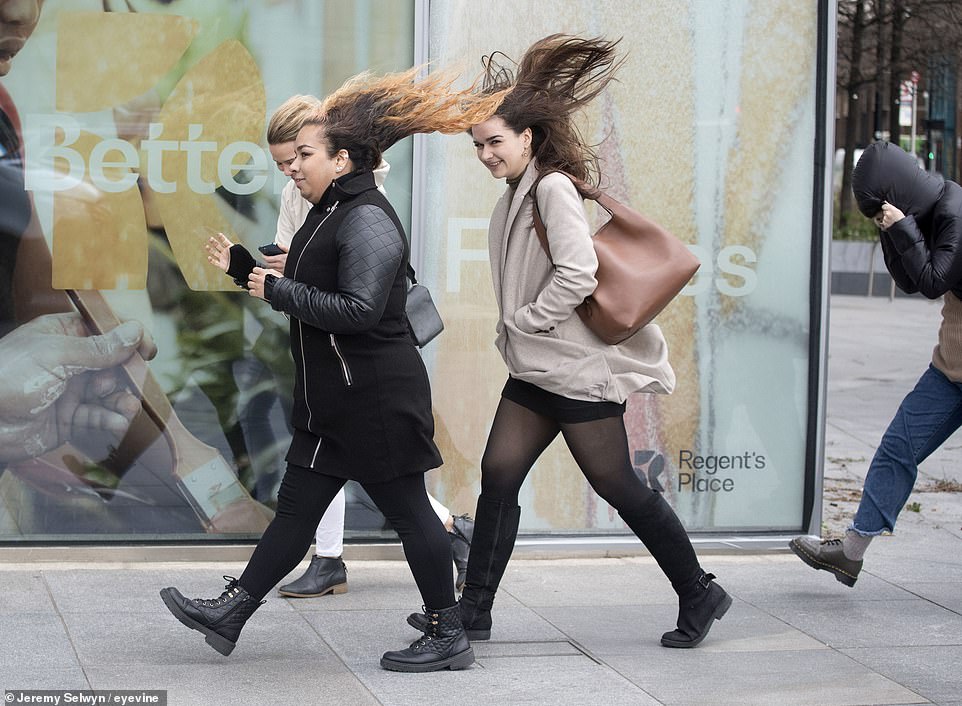 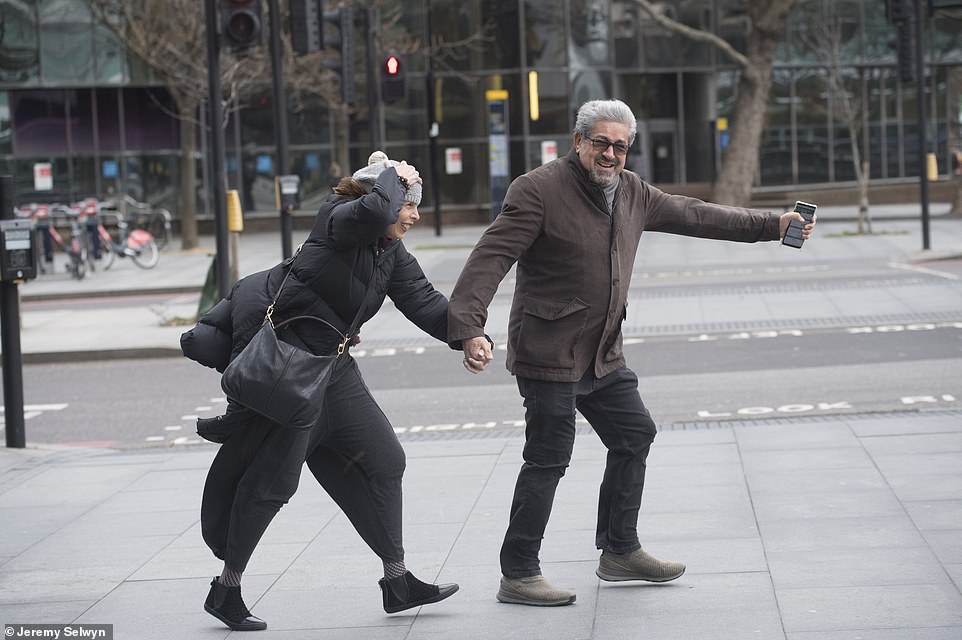 There have been major disruption to trains and planes across the country due to the high winds (pictured: Euston Road)

Rail operators including c2c in Essex and Southeastern in Kent cancelled all services, the M4 and M48 Severn crossings were both closed and Royal Mail suspended deliveries and closed delivery offices in all red areas. The M2 Medway Bridge in Kent was closed in both directions between Rochester and Maidstone due to strong winds.

Meanwhile more than 200,000 people tuned in to a YouTube channel livestreaming aircraft attempting to land at London Heathrow Airport. Big Jet TV captured the moment many of the jets made multiple attempts to land.

One plane from Chicago had three tries before going to Geneva. And a British Airways service from Edinburgh to Heathrow got all the way to London before turning back and returning to Scotland. Also today a TAP Air Portugal flight from Athens was filmed making contact with the runway before the pilot lost his nerve and taking off again.

Passengers on easyJet flight EJU8014 from Bordeaux to London Gatwick endured two aborted landings before the plane was put in a holding pattern over the south coast and then forced to return to the French city.

At Gatwick there were 15 cancellations and 67 delayed flights. British Airways, which said it was suffering from ‘significant disruption, said the rate of aircraft permitted to land at Heathrow was ‘being reduced due to gale force winds’. 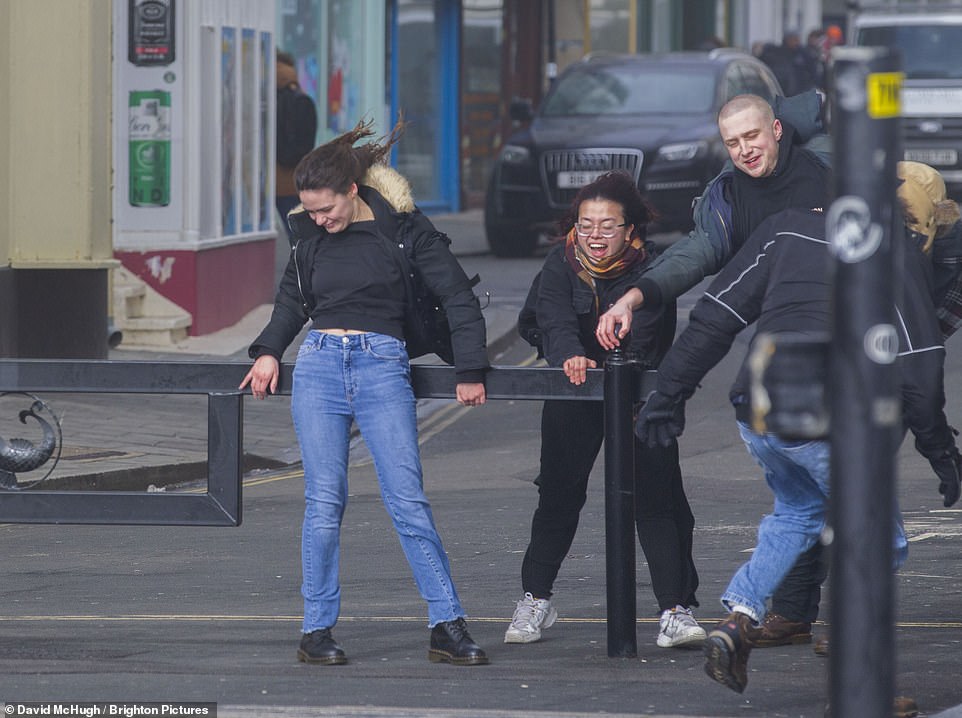 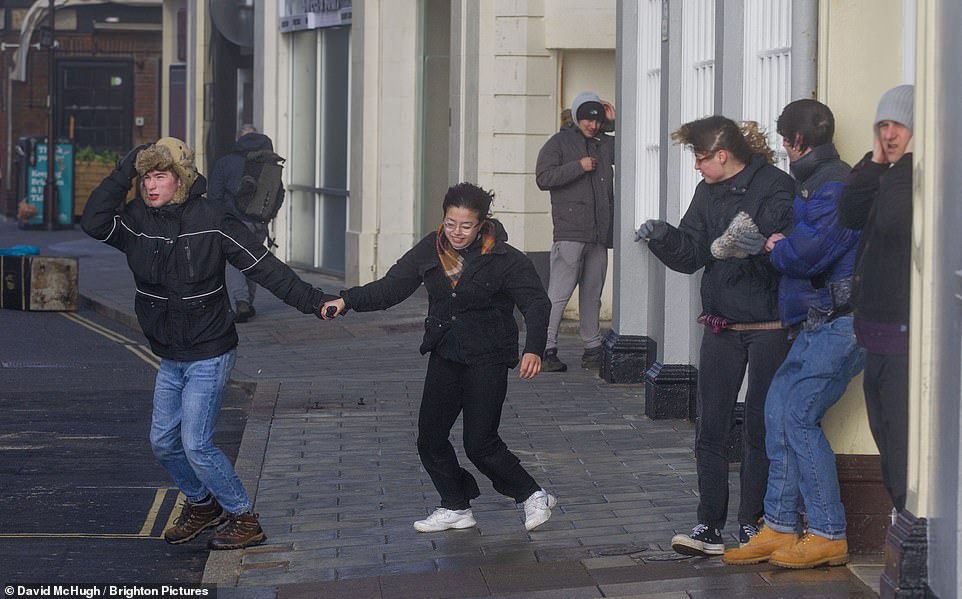 The storm has led to hundreds of schools being closed, while all trains in Wales have been suspended (pictured: Brighton)