Shops face £1.2billion Boxing Day sales slump with 40 per cent of the country in Tier 4 meaning non-essential stores are shut

The Boxing Day sales look likely to be the latest disaster in a year to forget for the retail sector.

Hopes that an online shopping boom might rescue Christmas are set to be dashed with December 26 spending predicted to be more than 25 per cent down on last year – by up to £1.2billion in total.

Even with a general shift towards online buying before the pandemic struck, high street stores could previously rely on crowds of bargain hunters packing shops in search of deals after Christmas. 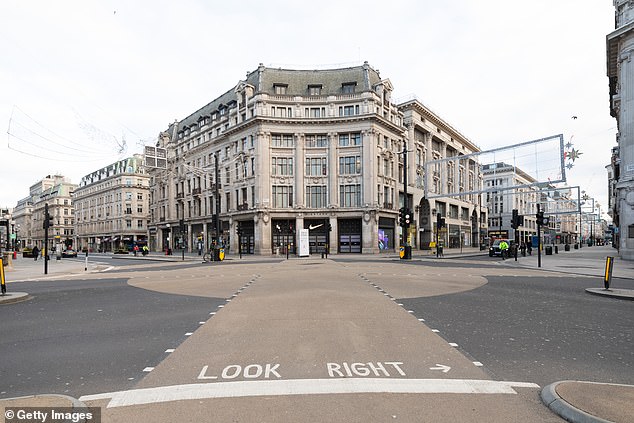 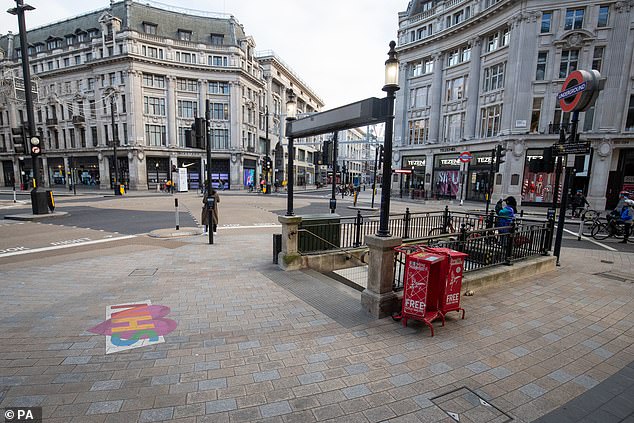 Areas such as Oxford Street, pictured, are expected to be ghost towns in a few hours time

But Covid-19 and surging infection rates mean 23million people or 43 per cent of the population are living in areas where only essential shops remain open.

The coronavirus has taken such a toll on staff and the sector that several big name chains including Marks and Spencer, Waitrose and John Lewis are keeping all or nearly all shops shut across the country today.

And with weather warnings in force across large parts of the UK, many resilient shoppers in lower tier areas tempted to keep the habit of a lifetime and go out in search of bargains may decide to stay home after all.

The tough new tier system announced recently is expected to cost retailers at least £2.6billion in lost sales during the post-Christmas week.

Total spending today is estimated to hit £3.2billion – a fall of 27 per cent compared to last year’s £4.38billion – according to a report by the Centre for Retail Research (CRR).

Despite this drop of almost £1.2billion and the threat of Covid, the research predicts 8.2million shoppers will still hit the high street, although ‘offline’ sales are expected to be more than 50 per cent down.

UK shoppers plan to spend an average of £162 each online in the sales, according to separate research by Barclaycard. Many big names started online sales – rebranded ‘winter’ or ‘Christmas’ sales – well before the traditional Boxing Day date.

Harrods has been forced to close all departments except its food hall and pharmacy but was yesterday already offering up to 50 per cent or more off thousands of items online.

There were similar discounts available on John Lewis’s website – which will keep all stores apart from the Trafford Centre in Manchester closed today.

However there will still be a lot of families braving high street shops today, with many deciding to wait for the sales before buying presents at a discount.

A thrifty 22 per cent admitted to taking advantage of post-Christmas sales for gifts for people they wouldn’t see over the festive period. But the misery brought by the pandemic is also a reason for treats and pampering.

Around 25 per cent intend to treat themselves due to the impact of the pandemic and a similar proportion intend to treat friends and family more than usual for the same reason.

One in three said money saved on socialising will help finance their Christmas spending.