Singapore: As Singapore prepares to roll out the first COVID-19 vaccinations in Asia this week, its striking success in controlling the virus is making some question whether they should take the jabs.

In a city-state where compliance with the authorities is generally high, some Singaporeans fear potential side effects – even if minimal – are not worth the risk when daily cases are almost zero and fatalities are among the world's lowest.

"Singapore is doing pretty well," said Aishwarya Kris, who is in her 40s and does not want a shot. "I doubt the vaccine will help at all."

A poll by local newspaper The Straits Times in early December found that while around half the respondents said they will get a vaccine when it is available, a third would rather wait six to 12 months.

But the government is keen to open more of the economy with the help of the vaccine in a country dependent on travel and trade and preparing to host the World Economic Forum's annual gathering next year.

"Singapore is a victim of its own success," said Leong Hoe Nam, an infectious diseases expert at the city's Mount Elizabeth Hospital. 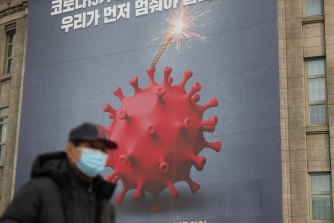 South Koreans are impatient with delays rolling out a vaccine as they endure a second wave. Credit:AP

According to a poll by research firm Realmeter, six in 10 South Koreans believe urgency should be prioritised over safety when it comes to COVID-19 vaccines and that inoculations should begin as soon as possible given the rapid surge in new cases.

Late on Tuesday, Moon's office said a public inoculation programme would "not begin too late". The government has previously said vaccinations could start in February.

The United States and the United Kingdom, suffering much higher cases and death rates, have no alternative to anti-virus measures other than the vaccines, Son Young-rae, a senior official at the health ministry, told a briefing.

"These countries are somewhat inappropriate for us to take as teachers, and considering the process of safety checks, we believe there is no reason for us to be the world's first or second country to receive the vaccines," Son said.

Meanwhile, the first batch of COVID-19 vaccines for US military personnel stationed in South Korea will arrive as early as Thursday, Yonhap news agency said, citing a military source.

Seoul and its surrounding areas have banned gatherings of more than four people from December 23 to January 3, and both restaurant owners and patrons may face up to 3 million won ($3,584 million) in fines for violation of the order.

Authorities have also shut down all ski resorts and winter tourist spots during the Christmas and New Year holidays.

The WHO to meet on virus mutation

The World Health Organization has called a meeting of members on Wednesday, Geneva time, to discuss strategies to counter a new, more infectious variant of the coronavirus that has emerged in Britain.

At least four drugmakers expect their COVID-19 vaccines will be effective against the new fast-spreading variant and are performing tests that should provide confirmation in a few weeks. The mutation known as the B.1.1.7 lineage may be up to 70 per cent more infectious and more of a concern for children.

In the event that the variant presents vaccine developers with an unexpected challenge, an advantage of Pfizer and BioNTech's mRNA vaccine is that scientists can quickly re-engineer genetic material in the shot to match that of the mutated protein, whereas modifying traditional vaccines would require extra steps.

Around 40 countries around the world have banned travel from Britain after Boris Johnson sent the nation into hard lockdown over concerns about how infectious the new variant is.

Germany reported a record daily coronavirus death toll of 962 on Wednesday, a week after the start of a hard lockdown that has forced most stores as well as hair salons and other services to close.

The previous daily death toll record was 952, reported on Dec. 16, the day the lockdown came into effect. 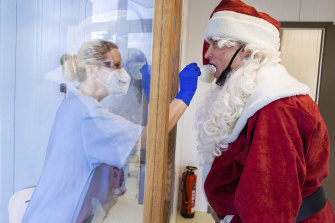 Germany managed the COVID-19 pandemic relatively well compared with other European countries in the first wave of the pandemic in spring.

But it has seen a sharp rise in case numbers and deaths in recent months, and an attempt failed in November to push down infection numbers with a "lockdown lite" that kept shops and schools open.

The eastern German state of Saxony has been hit hard by the second wave, reporting the highest number of deaths per capita over the course of the pandemic, with around 57 in 100,000 residents having died.

The town of Zittau, on Germany's borders with Poland and Czech Republic, said late on Tuesday its crematorium was no longer able to keep up with the number of deaths and has had to find additional space to store the dead.

Across Germany, the number of confirmed coronavirus cases increased by 24,740 to 1,554,920, the RKI's tally showed on Wednesday.

Dubai and Mexico ready to start vaccinations this week

Dubai: Dubai will start inoculating people with the COVID-19 vaccine produced by Pfizer and BioNTech for free from Wednesday, the emirate's government said, joining Saudi Arabia which last week became the first Arab country to begin using this vaccine. The move comes after the United Arab Emirates (UAE) and Bahrain earlier this month rolled out a vaccine developed by China National Pharmaceutical Group (Sinopharm) to the general public.

Mexican officials have reported a new daily high in confirmed coronavirus cases as the country awaits its first shipment of vaccine. 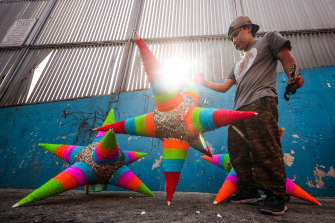 A pinata maker in Mexico City, the epicentre of the nation’s outbreak. Credit:Getty

Foreign Relations Secretary Marcelo Ebrard says Mexico expects to receive its first shipment of the Pfzier-BioNTech vaccine Wednesday. Priority will be given to front-line health workers and the elderly.

The Health Department reported 12,511 infections on Tuesday, local time, bringing the total to almost 1.34 million since the pandemic began. The number of confirmed COVID-19 deaths rose by 897 to almost 119,500, though because so little testing is done in Mexico officials estimate the real death toll is closer to 180,000.

Hundreds of health care workers are being flown into Mexico City from less hard-hit states since the capital has become the epicentre of the country’s pandemic.