Skateboarders win £460,000 skate park battle against Bonnie Tyler’s millionaires’ row neighbours after vicious feud with car dealer who boasted of ‘driving past in my brand new Ferrari’ when he confronted them

The wealthy residents of a millionaires’ row of luxury homes have lost a legal battle against young skateboarders over a new skatepark opposite their seafront houses.

Neighbours on the plush seafront strip – where Total Eclipse of the Heart singer Bonnie Tyler lives with her husband Robert Sullivan – mounted a legal challenge to block a new £460,000 skatepark being built in front of the strip.

One of the neighbours who opposed the skatepark expansion, car dealer and Trade Centre Wales owner Mark Bailey, once confronted the young skaters and boasted of ‘driving past in my brand new Ferrari’ when he received a load of abuse.

But he and six other wealthy home-owners have abandoned their fight to block it after the skateboarders were backed by angry drivers and park users, who staged their own protest by noisily blowing their car horns as they drove past the plush homes on the seafront road.

The concrete and steel skatepark has now been given planning permission for a large expansion, with a large bowl and additional ramps in place of the current half-pipe. 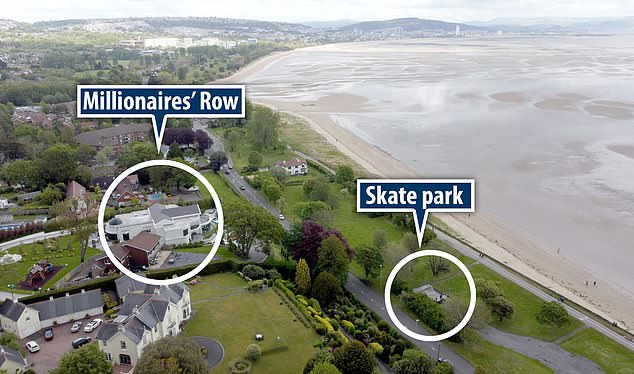 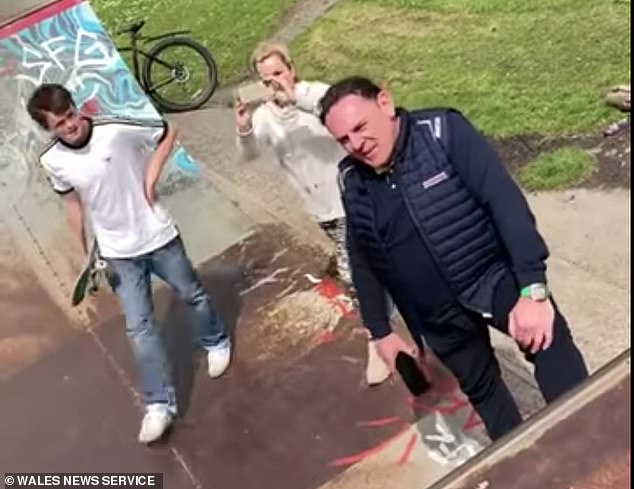 One of the neighbours who opposed the skatepark expansion, car dealer and Trade Centre Wales owner Mark Bailey (pictured in navy), once confronted the young skaters and boasted of ‘driving past in my brand new Ferrari’ when he received a load of abuse 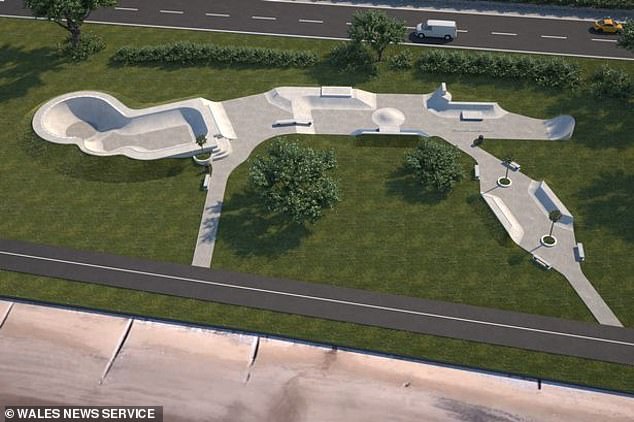 Heaven is a halfpipe: The concrete and steel skatepark has now been given planning permission for a large expansion, costing around £460,000 (artist’s impression of the new skate park)

Seven of the neighbours launched legal action with a law firm to challenge the way Swansea Council transferred the land to the local community council for the skatepark.

But a three-month period to carry on the fight has closed – and locals are celebrating victory in the four-year fight for the skatepark at Mumbles, Swansea.

Dr Martin O’Neill, chairman of Mumbles Community Council, said: ‘This is very welcome news which means that once again, we have overcome a significant barrier that has been holding up the skateboard park.

‘Hopefully, we can now press on with the development of this much-wanted facility without further delay.’

A campaign was launched on social media encouraging drivers to beep their horns as they drove past the luxury homes.

The main target of the abuse was at Mr Bailey – who lives next door to Bonnie Tyler – after he confronted some of the skateboarders.

Mr Bailey was filmed apparently threatening to ‘smash in the face’ of one of the skaters if he got too close to his wife while riding the ramp.

But Mr Bailey performed a U-turn and withdrew his objections to the expansion plans after seeing the video and suffering the effects of car horns blaring outside his home.

He said: ‘Having taken time to reflect on the footage of the altercation that was filmed at the skate park on Wednesday evening, my wife Rhianon and I unreservedly apologise for our actions that evening.

‘I do understand why the skaters are so passionate about the skate park and, whilst I now concede on making any objection to the redevelopment at that location, I also stand by my offer to significantly invest in a state-of-the art facility elsewhere in the borough with proper facilities and parking.’

Jason Williams, chairman of Mumbles Skatepark Association, said he was ‘very relieved’ and ‘extremely pleased’ about the freedom to proceed.

He said: ‘It is long overdue: It’s not just skateboarders, it’s parents and grandparents – everyone sees the benefits that it will bring.’ 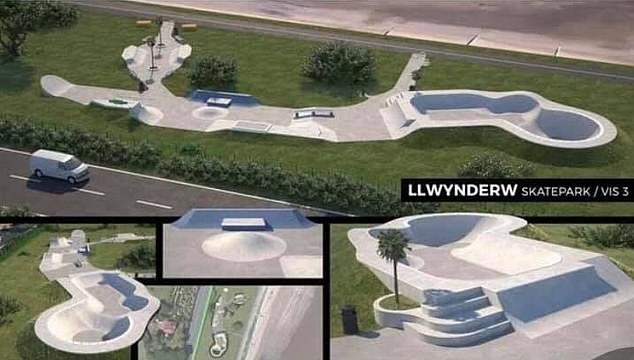 The costs of the expansion have risen steeply. An original proposal fours years ago would have cost just under £200,000.

The scheme was then redesigned the estimated costs were just over £303,000.

An online petition in support of the skatepark project had more than 5,700 signatures.

A mini half-pipe is the only piece of equipment currently on the site of the planned skate park and the area has been popular with skateboarders for more than 20 years.