Sniffer dogs are 94% accurate at detecting Covid – far better than rapid tests and could be deployed at airports, workplaces and public events to find people who don’t realise they are infected

Sniffer dogs are more effective than rapid tests at detecting cases of Covid-19 and could soon be deployed at airports, according to a major British study.

Researchers found coronavirus has a ‘distinctive odour’ that means specially-trained medical detection dogs can identify infected people, even those without symptoms.

Astonishingly, the dogs are able to detect up to 94 per cent per cent of cases – making them significantly more accurate than rapid lateral flow tests.

The authors said their findings had ‘exceeded all expectations’ and that dogs could be used at workplaces, theatres and stadiums to help Britain get back to normal.

The scientists, from the University of Durham and the London School of Hygiene and Tropical Medicine (LSHTM), are currently in discussions with the Department of Health and the World Health Organisation about deploying dogs at airports.

They said two dogs could screen 300 passengers coming off a plane for Covid-19 in just 30 minutes. People identified as positive by the dogs would then receive a PCR test to confirm the results. 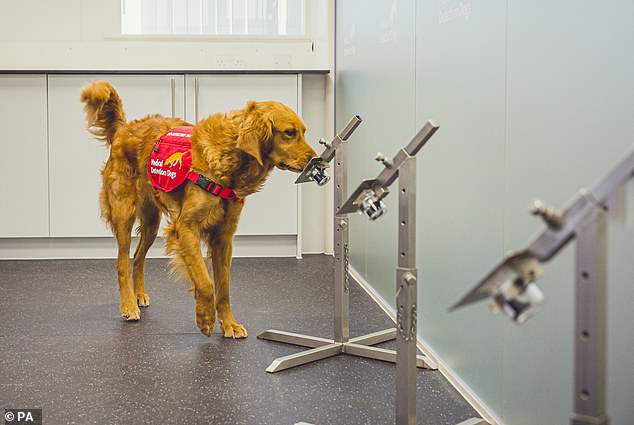 Pictured: Millie, one of six Medical Detection Dogs that took part in a double-blind trial to see if they could detect coronavirus 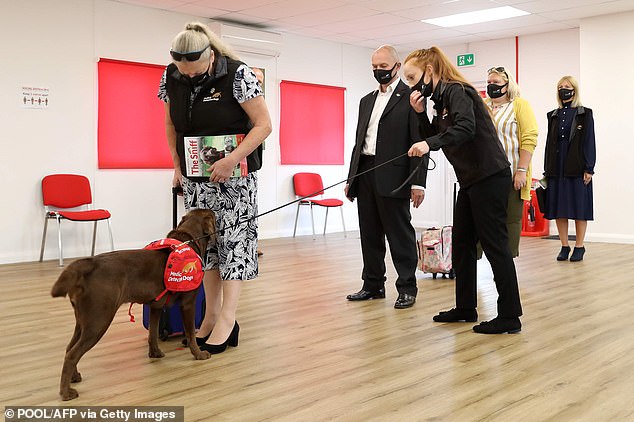 The charity Medical Detection Dogs trained the dogs to detect Covid-19 scent by using more than 3,500 body odour samples consisting of socks and t-shirts from members of the public and NHS staff.

After eight weeks of training, the dogs were then tested on their ability to detect the virus in a highly controlled randomised trial, using 200 positive samples and 200 negative samples.

All the dogs performed well, with more than 82 per cent accuracy. Three-year-old Labrador Tala was found to have the best nose for Covid, with an accuracy of 94.3 per cent. PCR tests detect 97 per cent of cases while lateral flow tests have an accuracy between 58 and 77 per cent.

She said: ‘Two of our dogs – Kip and Asher – were actually rescue dogs with very poor starts in life. Look at what they’ve gone on to achieve. 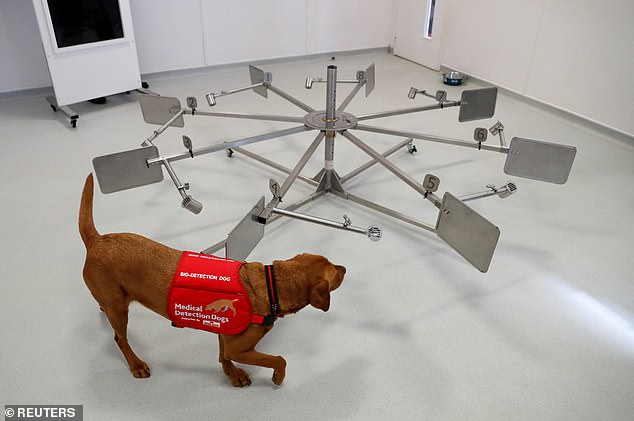 Pictured: Six Medical Detection Dogs that took part in a double-blind trial to see if they could detect coronavirus

‘Our dogs live in volunteers’ homes and come into work every single day. They love to work.’

She added: ‘Traditional gundog breeds would be considered the best, they have been bred for centuries to use their nose and search. They are also very friendly affable dogs and they enjoy working in public places.’

Professor James Logan, who led the project, stressed that dogs would not be able to entirely replace PCR tests but are significantly quicker and just as accurate as rapid lateral flow tests.

He said: ‘The advantage of using this method is being able to detect COVID-19 with incredible speed and good accuracy among large groups of people, even in asymptomatic cases.

‘This really could help us get back to doing the things we love sooner, safely and with less disruption, such as helping to reduce queuing times at border points or sporting events.

‘While PCR is the gold-standard test, dogs hold a major advantage and that is that they are quick.

‘300 people can be screened in under 30 minutes by two dogs, which is the equivalent of a plane load of passengers, without adding any extra time to their journey.

‘We hope this research will enable the deployment of Covid dogs here in the UK and overseas… at travel hubs such as airports, perhaps theatres, stadiums, workplaces and other public venues.’

He added that dogs would serve as a visual deterrent and stop infected people attempting to break the rules and get on a plane despite knowing they had the virus.

The study found that using the dogs to identify positive individuals, who then take a confirmatory PCR test, would detect 91 per cent of cases. 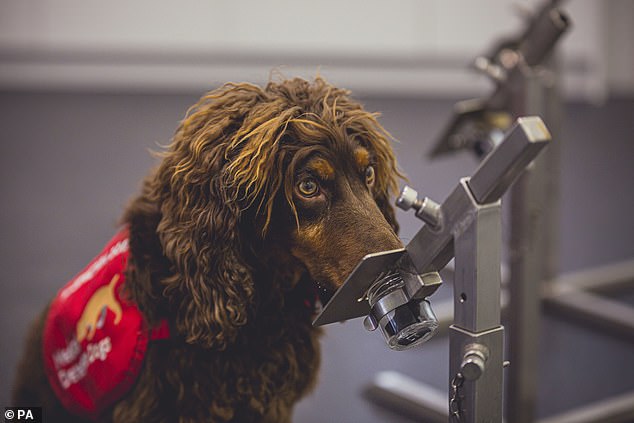 The study found that using the dogs to identify positive individuals, who then take a confirmatory PCR test, would detect 91 per cent of cases (pictured: Asher, one of the specially trained dogs) 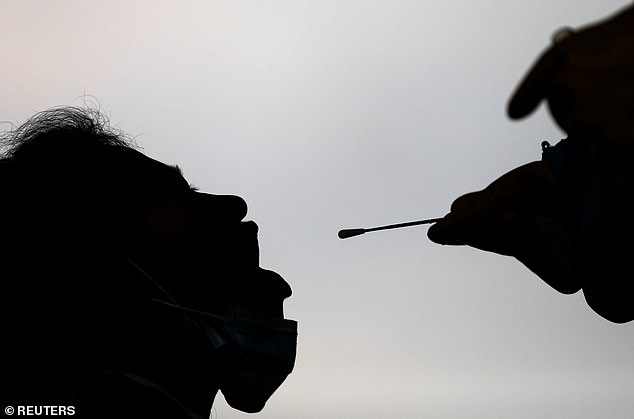 Scientists said two dogs could screen 300 passengers coming off a plane for Covid-19 in just 30 minutes. People identified as positive by the dogs would then receive a PCR test to confirm the results (file image)

This is more effective than a screening strategy using lateral flow tests, which is currently the UK Government’s favoured approach.

It is also twice as effective at preventing transmission of Covid-19 as a strategy based solely on asking symptomatic people to isolate.

Mass screening using PCR tests would only be marginally more effective, but significantly more expensive and time-consuming, according to mathematically modelling by LSHTM.

Initial findings also suggest the dogs will be effective at detecting new variants of the virus.

The researchers who led study, which is the first and largest of its kind, are now training up a second team of dogs.

They are hoping to proceed to the next phase of the trial, which will see the dogs detecting COVID-19 on real people in real world settings.

Professor Logan said: ‘We are in discussion with the UK Government and they are reviewing the results. Obviously we’re really hopeful.

‘It’s too early to say when the dogs will be deployed but you can train the dogs very quickly, within a couple of months.’ Despite decades of efforts, scientists have never been able to develop an instrument as quick and accurate as dogs’ noses.

It means sniffer dogs are still a crucial tool in fields such as drug and explosives detection.

However, dogs’ medical potential has yet to be fully realised- but this new research could change that.

When the pandemic struck, Professor Logan and his colleagues had been working on using dogs to spot malaria but they quickly switched their efforts to Covid-19.

Professor Logan added: ‘Now we have proven proof of principle for COVID, for other disease outbreaks in the future we think dogs could be deployed quickly to screen people and help stop the outbreak when it first begins.’