Google, Twitter and Facebook are working to remove the social media presence of a man responsible for the New Zealand mosque shootings as graphic video footage he streamed circulates.

The shooter, Brenton Tarrant, streamed a 17-minute video depicting his shooting rampage in real time to Facebook, with the video also uploaded to YouTube a short time after the shootings. He also uploaded a 73-page manifesto to Twitter.

A spokesman for Google, which owns YouTube, said it removed a video after at least 100 people had viewed it and more than six had left comments. 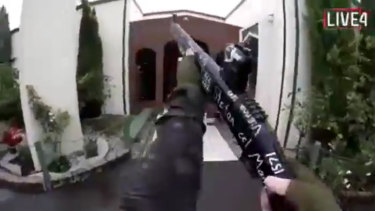 A screenshot from the gunman’s video. It shows the gunman holding a high-powered gun outside the mosque.Credit:YouTube

His social media accounts have since been removed from three sites, as well as Instagram, but not before the video was shared on social media by other users.

The shooter’s Twitter account, on which he posted content linked to white supremacist websites and photos of guns, was suspended around 2pm, more than an hour after the shooting.

However, segments of the video and gifs, uploaded by third parties, were still visible at the time of writing.

A Twitter spokesman said: “We are deeply saddened to hear of the shootings in Christchurch today. Twitter has rigorous processes and a dedicated team in place for managing exigent and emergency situations such as this.”

Facebook activated a crisis response for the shooting at 1:37pm, an hour after the attack.

In a statement, Facebook said: “Our hearts go out to the victims, their families and the community affected by this horrendous act. 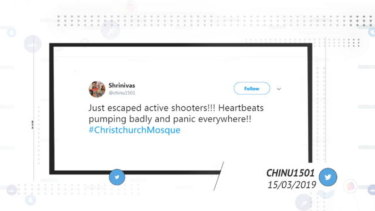 Distressing scenes in Christchurch where New Zealand were set to host Bangladesh.Credit:omnisport

“New Zealand Police alerted us to a video on Facebook shortly after the livestream commenced and we quickly removed both the shooter’s Facebook and Instagram accounts and the video. We're also removing any praise or support for the crime and the shooter or shooters as soon as we’re aware.”

A Facebook spokesman said "as you can probably imagine, this is still an unfolding issue. We are still in the process of removing content from Facebook".

A YouTube spokesman said: “Our hearts go out to the victims of this terrible tragedy. Shocking, violent and graphic content has no place on our platforms, and is removed as soon as we become aware of it.”

The social media giants have come under increased global scrutiny in the past 24 months over their responsibilities in stopping hate speech and graphic content from being shared on their platforms.

In his manifesto, Tarrant wrote he developed his beliefs on the “the internet, of course. You will not find the truth anywhere else''.

All three social media sites stated they would work with law enforcement.

A Spark spokesman said the company, Vodafone and New Zealand's third-largest internet provider Vocus had agreed to block customers' access to overseas websites that provided access to the video.

The Australia Media and Communications Authority reported that it received a "small number" of complaints about a "number of broadcasters" for showing graphic segments of the video.

Some television networks showed edited clips or stills from the footage on Friday.

New Zealand Police have urged social-media users not to share the footage.