As the AFL finals heat up, and the excitement builds towards the big one, we are often reminded to consider the many unseen faces behind the scenes who help make our great game what it is, from the club staff to the cheer squads, the physios to the sellers of the Footy Record.

But there’s one group who rarely get a mention. 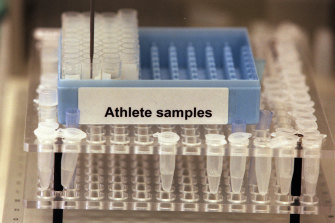 This September, spare a thought for the good folk who help keep the game clean, and our players protected from the scourge of addiction. I’m talking about the illicit drug testers, the officers who, in other words, take the piss.

Their work is unseen and unacknowledged. I should know, I used to be one of them.

For several years I was employed as a specimen collector for the AFL as part of the administration of its illicit drugs policy. In the hierarchy of footy administration we might have ranked just above the fake eagles used to scare away the seagulls at the MCG, but without the visible profile. 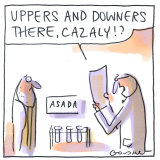 The job basically involved turning up – without warning, naturally – to one of the footy clubs with a bagful of plastic cups in order to extract the piss from randomly selected, and occasionally targeted, footballers, before securely transporting the samples back to the lab, where they were screened for any evidence of recreational drug use.

We did this in teams of two or three, and were generally greeted by the players with all the enthusiasm one would expect for a bunch of strangers rocking up to your work to collect your wee. I doubt the dreams of junior footballers includes this part.

There was of course some professional training and certification required for the job. Its execution required a delicate balance of ensuring the sample was definitely coming from the right source without staring too closely.

The players held their own cups, while we stood back and observed with the polite decorum of a butler. I have a few – mostly female – friends who took a deep interest in my job. I tried to explain that squeezing into a cubicle with a sweaty footballer, waiting for them to urinate, was not as glamorous as it sounds.

Some of them were keen to get some off-field stats. But I have always maintained professional confidentiality, and I’m proud to say I wouldn’t be able to identify a single AFL member if it stood in a line-up.

From swaggering cowboys, filling your cup with the flourish of pouring a draught on tap, to timid rookies with stage fright.

I can disclose, however, that on the whole, the players were great – professional, patient, understanding, and, shall I say, generous.

I can also say, without naming names, that the manner in which they provided their samples was as varied and colourful as the personalities on the field, from swaggering cowboys, filling your cup with the flourish of pouring a draught on tap, to timid rookies with stage fright.

There were occasions when I’d have to sit alone with a player in the change rooms long into the night, after everyone else had gone home. We used various techniques from running taps to humming Raindrops Keep Falling on My Head to try to open the floodgates. 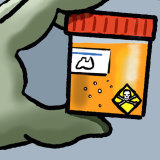 The delicate matter of drug testing.Credit:Dyson

Linking the pee to the player is, of course, the critical part of the protocol, and a rigorous chain of custody ensures it is. As drug tests have become more commonplace, the technology around beating them has become more sophisticated, the case of building a better mouse to avoid a better mousetrap.

Fake weeing penises are easily purchased online these days, the “ScreenyWeeny 5.0” being a big seller.

There’s a story, probably apocryphal, of a male American footballer being given a good news/bad news verdict on his drug test. The good news: you’re clean. The bad news: you’re pregnant.

But I’m pretty confident I was never tricked by a fake appendage. Generally, the whole operation went quickly and smoothly.

We could be in and out of the club within a couple of hours, having done our utmost to get the job done as quickly as possible, so the players could get back to doing what they wanted to be doing.

But, as might be expected in any workplace, accidents did happen. There’s many a slip betwixt cup and lid! It was not unknown for one of us to slip on a wet, tiled floor and lose a sample. On such occasions we could only apologetically hand the player a warm Powerade and tell them to drink up, and we’d see them again in 20 minutes. As in general, they were admirably professional about it.

I came away from my job as a wee collector with a deeper admiration for the work that goes into winning a premiership cup. The players deserve every accolade.

But behind the scenes, there’s an unseen team who also deserve some recognition, even if the only cup they ever hold up is a little plastic one, that isn’t filled with champagne.