Spurned mother-of-three, 47, must pay ex-boyfriend £100 compensation after hounding him out of job by giving naked picture of him to his boss

Leanne Robson, 47 (pictured), appeared at Stockport magistrates court on Friday and was ordered to pay ex-boyfriend Peter Bowden £100 compensation after she distributed his naked picture to his boss and hounded him out of his security guard job

A spurned mother of three who hounded her ex-boyfriend out of his job after she distributed a naked picture of him to his boss was ordered to pay him £100 compensation.

Afterward appearing at Stockport magistrates court on Friday, cinema attendant Leanne Robson, 47, vowed not to pay the damages to ex Peter Bowden, 40, insisting: ‘The court system is absolutely disgraceful – he isn’t getting a penny out of me!’

Robson had turned up at the Mr Bowden’s workplace and gave an A4 sized image to his manager whilst the victim, a security guard watched the meeting unfold on CCTV.

The boss did not look at the image as the picture was folded over but Robson threatened to the share the same explicit image of her former partner – taken during the couple’s relationship – at his children’s school.

She also tried to kick Mr Bowden down a flight of stairs during another confrontation at the Red Rock leisure complex where they both worked in Stockport, Greater Manchester and would repeatedly turn up at his office demanding to speak to him.

Robson, from Brinnington, was convicted of disclosing a private picture with intent to cause distress and assault by beating, and admitted a further offence of common assault.

Robson was also issued with a restraining order, banning her from contacting the victim, his girlfriend and the children’s school.

Offences in relation to disclosing private sexual photographs and films carry a maximum sentence of two years in jail.

Outside court Robson said: ‘I’m absolutely appalled that he has been given compensation – he has already had over £1000 off me when we were dating.

‘I have been slapped in the face, had a drink poured over me and I have been spat at and called an evil bitch since all this happened and I’m absolutely fuming.

‘I apologise for the picture I shouldn’t have done it but the court system is attacking the wrong people. I’m not some sort of stalker.’ 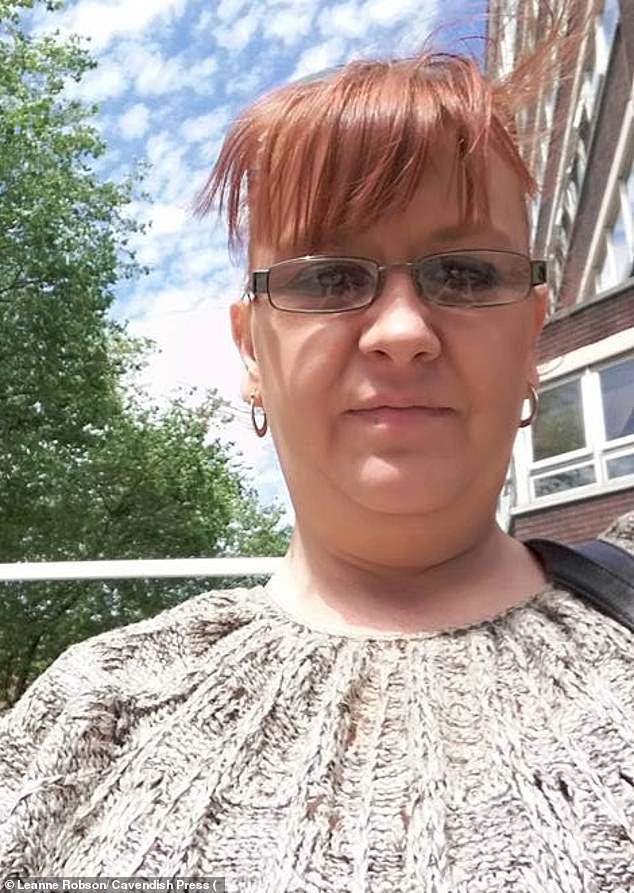 Robson, who works as a cinema attendant, vowed not to pay the damages to Mr Bowden, 40, insisting: ‘The court system is absolutely disgraceful – he isn’t getting a penny out of me!’

The court heard the former couple’s romance began in March last year after meeting at work, but fizzled out by September amid allegations he owed her money.

The first incident occurred the following month when the former security guard was on patrol with his supervisor when he was attacked by Robson as she emerged from the cinema.

Mr Bowden told the hearing: ‘She was slapping, kicking, punching and swearing – calling me a “horrible b**tard” and saying she was going to get me killed.

‘In the November I got a radio call that I had a visitor at the office, and as soon a so got up there I saw it was Leanne.

He said: ‘I walked away down the stairs but she came after me and started attacking me, swearing and shouting and punching me to the back of the head twice. She was saying she was going to get me battered and get me killed when I finished work and she tried to kick me down the stairs.

‘She put her foot at the bottom of my back and she pushed. I just went down a couple of steps and carried on walking but a couple of members of the public were telling her to calm down. She kept coming down to the office and it was disrupting my work.’ 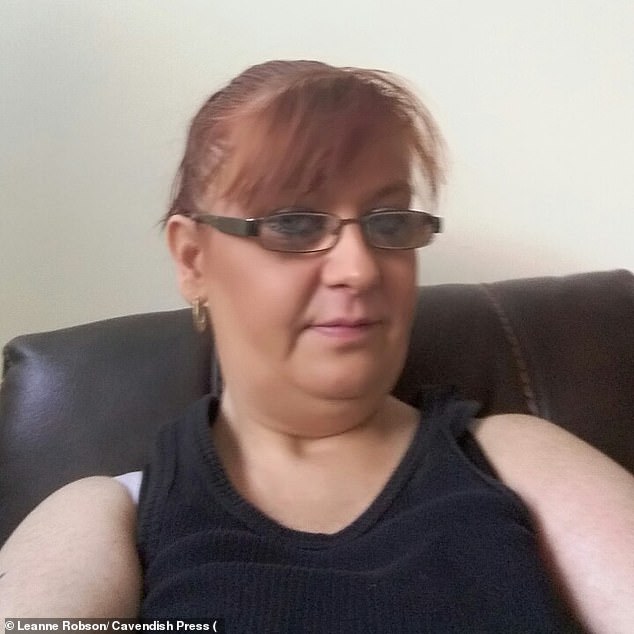 The court heard the former couple’s romance began in March last year after meeting at work, but fizzled out by September amid allegations he owed her money

He also recalled: ‘On January 8th I was watching the CCTV when I saw Leanne approach the building with her daughter. She came to the office and was knocking on the door and windows and one of my managers was in the gym downstairs and he came out and he started talking to her.

‘He brought them up to see if I wanted to talk to them but I told him I didn’t want to. Then I saw Leanne hand my manager a piece of paper and he came back into the office. It was an A4 piece of paper folded twice. I knew what it was as she told me she was going to do it.

Mr Bowden explained Robson told him over a series of text messages in the weeks leading up to the incident that she was going to give his boss full naked picture of him. 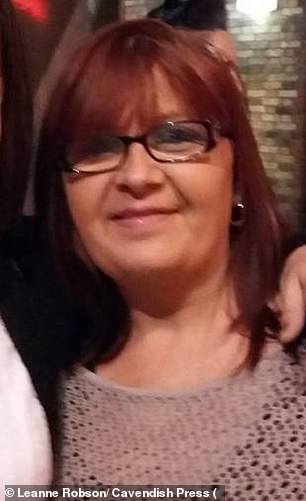 Robson said: ‘I’m going to be appealing – I apologise for sending a photograph, I shouldn’t have done that but the other charges are false. He had over £1000 off me. What about my distress that I went through?’

He also said Robson told him she was going to post it all over his children’s school.

‘If she did [lend] me money, it got paid back to her. She bought me new trainers for my birthday and a silver jacket as well. I told her my mother had died as I just wanted away from her – even though my mother’s not dead.

‘She kept telling me she wanted money off me even though I didn’t owe her any money. She’s making it up about me owing her money,’ he added.

In a statement to police Mr Bowden said: ‘Since this started I have lost three stone in weight, keep being sick and have problems with my bladder. I had to change my mobile number twice because of the messages that have been sent.

‘I’ve changed the way I come home from work. I don’t deserve to be attacked in work and my partner doesn’t deserve the stress she’s getting. My son hasn’t spoken to me for three months and my daughter is upset.

‘Whilst she is doing what she’s doing I can’t work to relieve this problem.. Nothing is being done about it she has been found guilty I want an order to stop contact with me or my partner. The stress of this is making me ill it is causing my partner a lot of unnecessary grief.’

Robson who was unrepresented told the JPs: ‘I’m going to be appealing – I apologise for sending a photograph, I shouldn’t have done that but the other charges are false. He had over £1000 off me. What about my distress that I went through?’