A UK spy chief warned that western democracies face an ‘existential threat’ if they fail to  keep ahead of China and Russia in a technological evolutionary race .

Jeremy Fleming, the director of GCHQ, said that while the UK is a digital ‘big animal’, there is a ‘pressing need to act’ to combat undemocratic nations who are increasingly powerful.

In a major speech today, he warned that the digital dominance of hostile states like China threatens our future prosperity and security.

And, if left unchecked, this could threaten the design and freedom of the internet and endanger future technologies such as ‘smart cities’.

Giving the annual Imperial College Vincent Briscoe Annual Security Lecture, remotely from GCHQ in Gloucester, he said: ‘As an intelligence chief, I am bound to say that Russia and China remain of concern.

‘Russia’s pattern of malign behaviour around the world – whether in cyberspace, in election interference or in the aggressive operations of their intelligence services – demonstrates that it remains the most acute threat to the UK’s national and collective security.

‘Previously, I and others have pointed out that in terms of our national security, Russia is affecting the weather, whilst China is shaping the climate.

‘That remains the case. But when it comes to technology, I’ll use another analogy. The threat posed by Russia’s activity is like finding a vulnerability on a specific app on your phone – it’s potentially serious, but you can probably use an alternative.

‘However, the concern is that China’s size and technological weight means that it has the potential to control the global operating system. 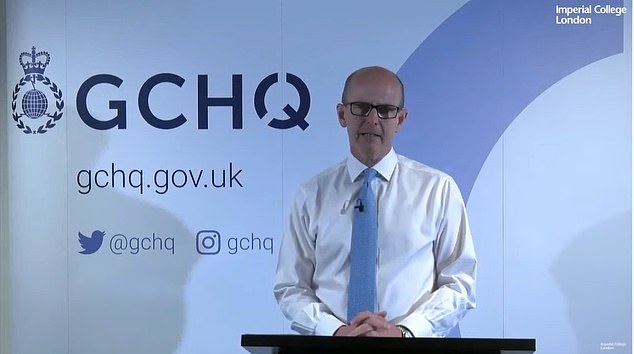 Jeremy Fleming, the director of GCHQ, said that while the UK is a digital ‘big animal’, there is a ‘pressing need to act’ to combat undemocratic nations who are increasingly powerful 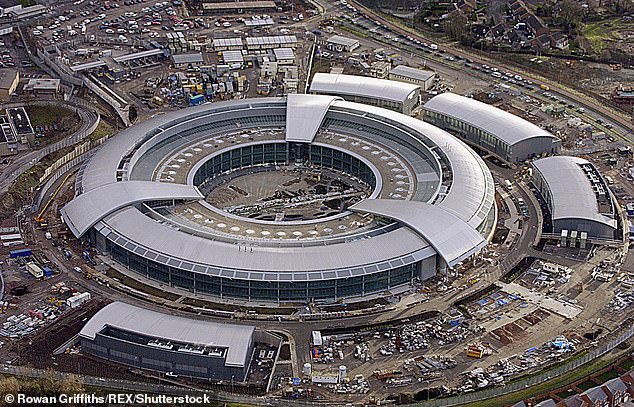 Jeremy Fleming, the director of GCHQ, called for the country to evolve like an animal in a changing habitat as the ‘global digital environment’ comes under threat from foreign adversaries like China and Russia (pictured: GCHQ centre)

‘States like China are early implementors of many of the emerging technologies that are changing the digital environment.

‘They have a competing vision for the future of cyberspace and are playing strongly into the debate around international rules and standards.’

Mr Fleming said the coronavirus pandemic and the increased reliance society had placed on technology had not only benefited the UK and its allies, but also ‘our foes’, who have exploited ‘accelerations in connectivity and poor cyber security’.

In response to this threat, Mr Fleming said it was now vital that the UK adapt in order to keep up with the evolving threats, calling it a ‘moment of reckoning’.

He said the UK must lead conversations with its allies about global cyber defence, safeguarding democracy and how to collaborate in protecting scientific research and supply chains.

The director called out adversaries for misusing tools meant to bring society together to instead ‘fuel division, exploit vulnerable people and peddle extreme views’.

The warning comes amid wider political tensions between powers in the West and East.

Most recently, Beijing’s national security law imposed on Hong Kong has been a major source of contention, while concerns have been raised about Ukraine’s border due to the recent Russian military build-up of forces there.

He added: ‘The UK really is a global cyber power – a big animal in the digital world. But historic strength does not mean we can assume we will be in the future.

‘New technology is enabling life online. Cyber security is an increasingly strategic issue that needs a whole nation approach. The rules are changing in ways not always controlled by Government.’

He added ‘Without action, it is increasingly clear that the key technologies on which we will rely for our future prosperity and security won’t be shaped and controlled by the West.

‘We are now facing a moment of reckoning. In the natural world, during a period of rapid change, the only option is to adapt. And it’s the same for us.’

Mr Fleming called for the development and protection of future technologies to be a priority for Britain, warning that the pandemic has ‘enabled our adversaries’ in new ways.

And we will have to work with ‘like-minded nations’ to find solutions to technological issues, the spy chief added.