“We are now facing a far more serious situation beyond the mere shortages of fuel, gas, electricity and food. Our economy has completely collapsed. That is the most serious issue before us today,” Prime Minister Ranil Wickremesinghe told Parliament on Wednesday. 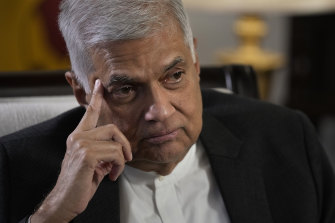 Wickremesinghe is also the finance minister tasked with stabilising the economy, which is foundering under the weight of heavy debts, lost tourism revenue and other impacts from the pandemic and surging costs for commodities.

“Currently, the Ceylon Petroleum Corporation is $700 million in debt,” he told MPs. “As a result, no country or organisation in the world is willing to provide fuel to us. They are even reluctant to provide fuel for cash,” he said.

Wickremesinghe said the government had failed to act in time to turn the situation around, as Sri Lanka’s foreign reserves dwindled.

“If steps had at least been taken to slow down the collapse of the economy at the beginning, we would not be facing this difficult situation today. But we lost out on this opportunity. We are now seeing signs of a possible fall to rock bottom,” he said. 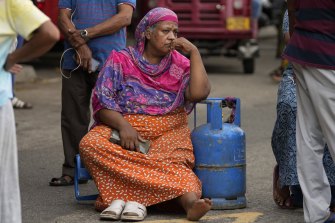 Sri Lanka has been muddling through mainly supported by $US4 billion ($5.8 billion) in credit lines from neighbouring India. But Wickremesinghe said India would not be able to keep Sri Lanka afloat for too long.

Sri Lanka has already announced that it is suspending repayment of $US7 billion in foreign debt due for repayment this year, pending the outcome of negotiations with the International Monetary Fund on a rescue package. It must pay $US5 billion on average annually until 2026.

The foreign currency crisis has resulted in massive shortages that have forced people to stand in long lines to buy essentials, including fuel, cooking gas and medicine.

Sri Lanka will soon hold a donor conference with China, India and Japan as it seeks overseas assistance to find a way out of its worst economic crisis in decades, Wickremesinghe told parliament.

“We need the support of India, Japan and China, who have been historic allies,” he said.

A high-level delegation from India will also arrive on Thursday for talks on additional support from New Delhi, while a special team from the US Treasury will visit next week, Wickremesinghe said.

Protests have raged since April, with demonstrators blaming President Gotabaya Rajapaksa and his government for policy blunders that torpedoed the economy and plunged the nation into chaos. In May, a wave of violent protests forced Rajapaksa’s brother and then-prime minister Mahinda Rajapaksa to step down.

In an interview with the Associated Press last week, Wickremesinghe said he feared food shortages might persist until 2024 as the war in Ukraine disrupts global supply chains, causing prices of some commodities to soar.

Sri Lanka’s economic predicament was compounded by a ban last year on imported chemical fertilisers that angered farmers and affected harvests. The ban was lifted after six months, but the damage was already done, leading to food shortages.

Government officials have been given every Friday off for three months to save on fuel and grow their own fruits and vegetables as food reserves run low. The inflation rate for food is 57 per cent, according to official data, and 70 per cent of Sri Lankan homes surveyed by UNICEF in May reported reduced food consumption.