Nearly 700,000 Rohingya have fled Myanmar since August 2017 in what the UN has described as ethnic cleansing. 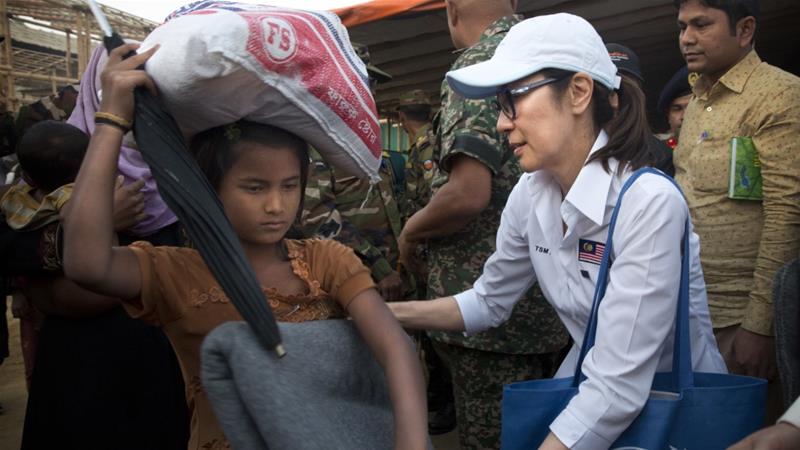 Hollywood star Michelle Yeoh says she’s appalled by the plight of the hundreds of thousands of Rohingya Muslims who have fled violence in Myanmar into Bangladesh.

Yeoh, a goodwill ambassador for the UN Development Programme, visited sprawling refugee camps in Bangladesh’s Cox’s Bazar on Saturday, as part of a Malaysian delegation led by the Southeast Asian nation’s military chief. The team visited a hospital set up by Malaysia and distributed relief goods in another camp.

“It is very important that we’re here, because what the Rohingya people are going through is despicable and it’s very, very tragic. It should not be allowed,” she said. “Every single one of them deserves to have the human rights that should be given to them.”

Nearly 700,000 Rohingya have fled Myanmar since August, in what the UN has described as ethnic cleansing. Myanmar’s military has denied the charges, saying they were conducting “clearance operations” following attacks by Rohingya fighters on police posts.

Yeoh was most recently seen in sci-fi TV series “Star Trek: Discovery”. She also played Myanmar’s leader Aung San Suu Kyi in “The Lady”, a 2011 biopic about the Nobel Peace laureate’s struggle to bring democracy to her country.

Aung San Suu Kyi has faced widespread international criticism for not speaking out in defence of the Rohingya. Former New Mexico Governor Bill Richardson resigned from an advisory panel on the crisis this past week, calling it a “whitewash and a cheerleading operation” for Aung San Suu Kyi.