State and federal anti-discrimination laws, along with changing community expectations, have transformed our workplaces. While the equal rights battle for women is their most notable success, similar efforts to stamp out discrimination based on age, sexual orientation, disability and race have created more diverse workplaces than at any time in our history.

But these gains should not be taken for granted, nor characterised as job done. This week, The Age reported on teachers being sacked by religious schools after coming out as gay. 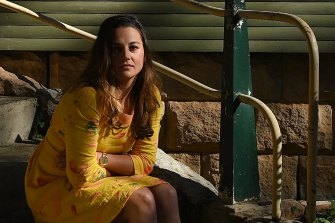 Teacher Steph Lentz, who was sacked by her Christian school after she told it she was gay.Credit:Kate Geraghty

In the case of Steph Lentz, the English teacher was shown the door by the Covenant Christian School after realising she could no longer remain closeted. The school terminated her employment for failing to follow the school’s statement of belief, which includes the belief in the “immorality” of homosexuality.

Her sacking was perfectly legal under most state and federal laws, including those in Victoria, which give religious organisations and their schools exemptions from anti-discrimination legislation, despite the generous public funding they receive. The Andrews government has long pledged to enact new laws to shut down the loophole – Tasmania and the ACT have already done so – but has so far failed to act.

What’s at stake in these arguments is a balance between competing rights: your right to believe what you want and act on those beliefs; and my right to work, to be myself, and to live without feeling harassed. Under current law in Victoria and other states, religious organisations have more freedom to discriminate than others.

The law remains contended, not least because of a promise made by then prime minister Malcolm Turnbull to inquire into the state of religious freedom in Australia – a promise made as a concession to the right wing of his party after the marriage equality legislation passed.

That inquiry prompted draft legislation, the Religious Discrimination Bill, which went through two drafts under former attorney-general Christian Porter. It upset the balance and was strongly contended on all sides, then delayed. A third draft, being put together by Mr Porter’s successor, Michaelia Cash, is expected by the end of the year.

Where and when that legislation ultimately lands is unknown, but the earlier drafts allowed people to make discriminatory statements if they were genuine statements of religious belief. On the face of it, this would have overridden strong state laws, such as Tasmania’s which prohibit such statements, but to what extent is unknown. People interested in this area are watching keenly.

But some do. Christian Schools Australia’s public policy director, Mark Spencer, said it was vital that “the rights of school communities to operate in accordance with religious beliefs must be upheld”. Since in their view of Christianity homosexuality is “immoral”, they say schools must have the ability to discriminate on that basis when hiring and firing.

The Age believes there should be strict limits to this right. An ordained minister or even a religious teacher whose job is to teach a particular doctrine could reasonably be required by their school or church to adhere to those doctrines. It’s the price you pay to join the priesthood or teach religion.

However, we cannot see how it should be a requirement of a maths teacher or an English teacher. Why should such a teacher’s activities outside school – as long as they are legal and consensual – have any impact on their ability to teach their subject?

The High Court has established a similar rule, saying in Christian Youth Camps v Cobaw Community Health that a Christian-run camping organisation could not legally refuse to offer its services to an organisation for same-sex attracted young people.

The states should pass stronger anti-discrimination legislation and oppose any attempt by the federal government to override them.

NOTE FROM THE EDITOR – AGE

Gay Alcorn sends an exclusive newsletter to subscribers each week. Sign up to receive her Note from the Editor.