Residents in beachfront homes have been put on high alert after a new severe weather warning was issued for most of the NSW coastline on Thursday morning.

The Bureau of Meteorology has warned “local damage” is expected to occur in erosion-prone areas as “abnormally high tides” and damaging surf hit the coast on Thursday and Friday.

In Lismore, authorities feared the city’s Wilsons River would reach 12 metres on Wednesday, but the flood reached just 11.4m at 5pm. After overtopping the levee for the second time this month, the river is now at 10.89m and is continuing to fall on Thursday morning.

The bureau expects Sydney as well as areas in the Mid North Coast, Hunter, Illawarra and South Coast will now be the focus of the severe weather.

“Very heavy surf, with waves exceeding five metres, may lead to localised damage and coastal erosion is expected to develop from Thursday afternoon, persisting during Friday,” the weather warning states. 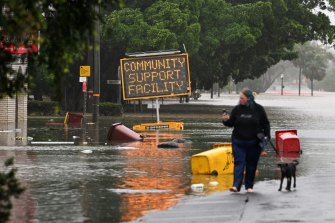 “Beach conditions, particularly along exposed south-facing beaches, could be dangerous and people should stay well away from the surf and surf exposed areas.”

The low is expected to move south over the coming days which will bring strong to gale force winds and damaging surf.

In erosion-prone areas such as Wamberal Beach, winds of over 60km/h are currently being predicted.

On Thursday morning, NSW SES assistant commissioner Nicole Hogan defended the emergency service on ABC News Breakfast after Lismore residents were told to return to their homes on Tuesday before being told to re-evacuate hours later.

Ms Hogan said the initial all-clear in Lismore was a “sound decision”.

“The situation had eased from a weather perspective and predictions on Tuesday afternoon,” she said.

“There was a significant weather system that came across later that day and into that night which undertook quite some torrential rain, which caused significant flash flooding in those communities. We … then, at that stage, whilst working with communities, had to re-issue the evacuation order in that particular area.

“We were working with a system that was quite dynamic. We will continue to work with the communities in those areas that are under evacuation order and as soon as it’s safe to do so, we will lift those orders.” 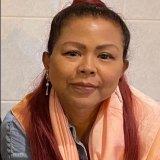 Anita Brakel, aged 55, is described as being of Asian appearance, 150cm to 160cm tall, thin build, with black and red long hair.Credit:NSW Police

The NSW SES responded to a total of 45 flood rescues in the last 24 hours, many of which were for medical assistance.

The service had 911 requests for assistance from 5am Wednesday to 5am Thursday.

Police are also continuing the search for 55-year-old Anita Brakel who is believed to have gone missing in her car in floodwaters on Tuesday.

Officers searched for the aged care nurse for several hours on Tuesday and Wednesday after she went missing in South Lismore, but have been unable to locate her.

A guide to the environment, what’s happening to it, what’s being done about it and what it means for the future. Sign up to our fortnightly Environment newsletter here.