‘Fusspots even took away my Werther’s Original’: Stewards are accused by mourners queuing to pay respects to the Queen of overzealously confiscating items

Security jobsworths had a field day as they took hand sanitiser and boiled sweets from elderly mourners queuing to pay their respects to the Queen.

Stewards in hi-vis were accused of being overzealous as they cracked down on what could and could not be brought into Westminster Hall where the Queen is lying in state.

Mourners also described brazen pushing-in towards the back of the line as young people took advantage of spaces left by slow elderly people in the queue.

Officials have enforced airport-style security as the public enter the Palace of Westminster. 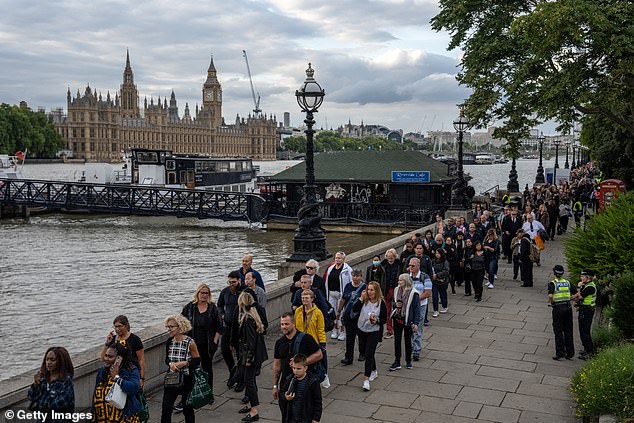 One mourner was forced to hand over a single Werther’s Original, lipstick and hand sanitiser, while others told of various items being confiscated.

Matthew, 39, said: ‘I was told to throw away my little bottle of glasses cleaner, you’d just never have even thought of it.’

He was also made to empty the liquid out of his electronic cigarette.

His mother Glennis, 72, had her mini-toothpaste, deodorant and face cream taken away.

‘I won’t look so fresh-faced tomorrow,’ she said.

Jane, 53, had a confrontation with the stewards after they demanded she hand over her perfume bottle.

‘They told me to throw away my Chanel No 5 but I begged and begged. I nearly cried,’ she said. ‘They wanted my make-up too but I hid it.’

While some could not be without their perfume or snacks, it was revealed that others couldn’t part from their pets.

A Parliamentary source told the Daily Mail that officials have stopped six mourners from entering Westminster Hall after they were caught trying to smuggle in their pet dogs hidden under coats.