The accused Southern California synagogue shooter made his first appearance in court on Tuesday where prosecutors said he fired only eight to 10 of the roughly 60 bullets he had before his weapon jammed.

John T. Earnest, 19, pleaded not guilty to charges of murder and attempted murder in the shooting that happened Saturday during a Passover service at the Chabad of Poway synagogue.

One woman was killed and three people wounded, including the rabbi.

Earnest was arrested shortly after the attack with 50 unfired bullets, a tactical vest and helmet, prosecutors said during his arraignment.

At the hearing, a bespectacled Earnest stood behind a glass panel, wearing blue jail clothes and showing no apparent emotion. 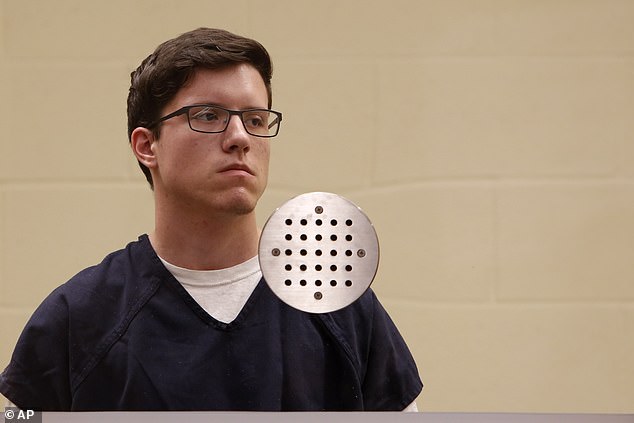 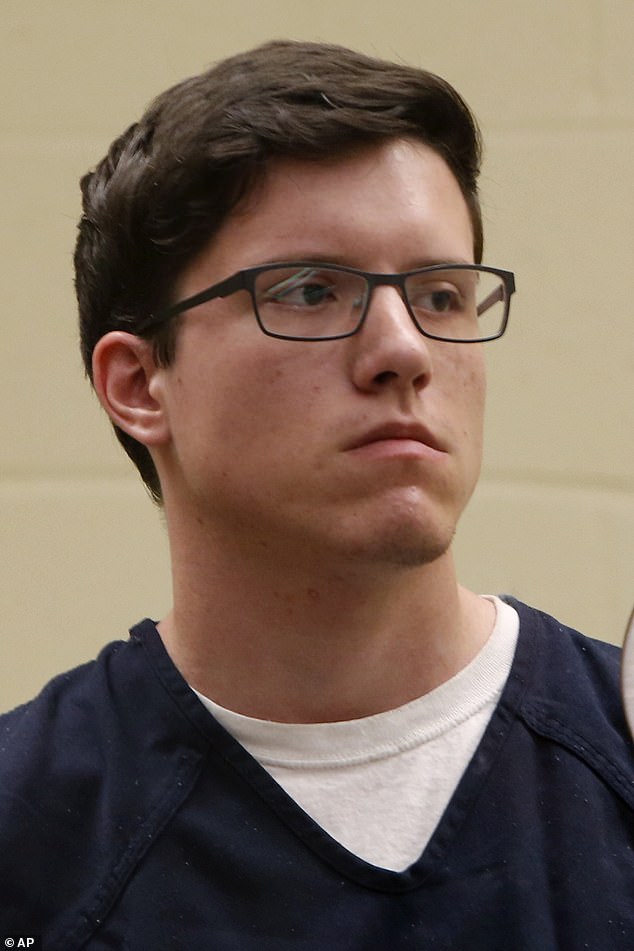 During the arraignment, Earnest pleaded not guilty to charges of murder and attempted murder in the shooting 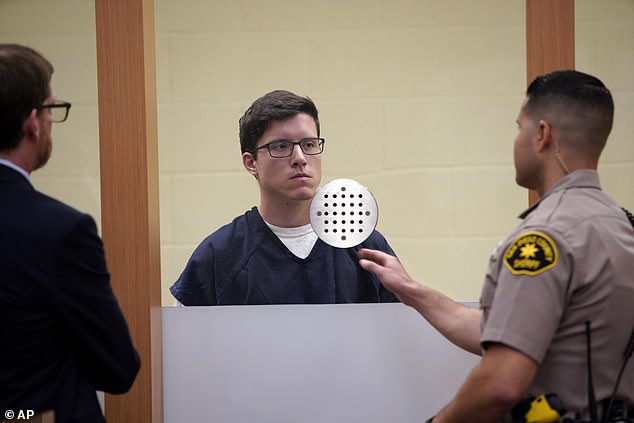 At the hearing, a bespectacled Earnest stood behind a glass panel, wearing blue jail clothes and showing no apparent emotion

He uttered only one word – ‘yes’ – to waive his right to a speedy preliminary hearing.

The judge scheduled a status hearing for May 30 and denied bail, calling Earnest an extreme threat to public safety.

Earnest was an accomplished student, athlete and musician whose embrace of white supremacy and anti-Semitism has dumbfounded his family and others who thought they knew him well.

He made the dean’s list both semesters last year as a nursing student at California State University, San Marcos.

In high school, he had stellar grades, swam on the varsity team and basked in the applause of classmates for his piano solos at talent shows. 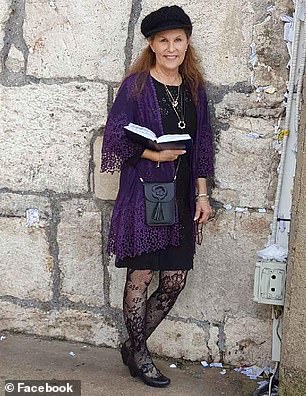 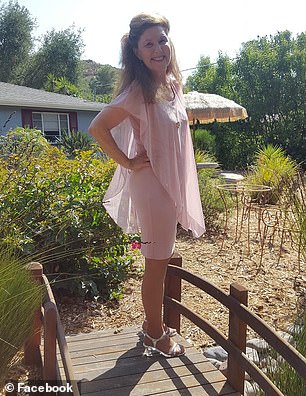 Lori Gilbert-Kaye, 60, (pictured) was identified as the woman who was killed during the horrific attack on Saturday 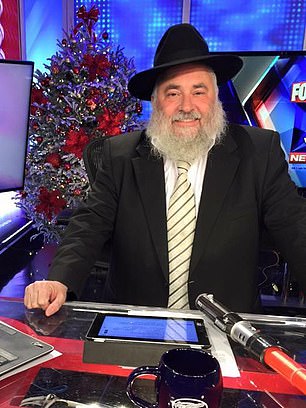 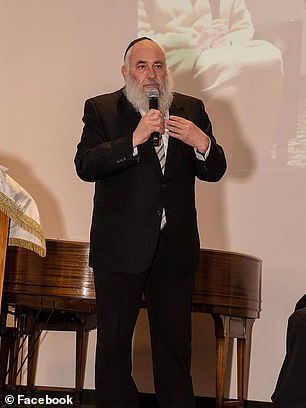 Rabbi Yisroel Goldstein was shot in the hand, but witnesses say he continued to deliver a sermon during the shooting

Earnest apparently became radicalized sometime over the last two years. He is also charged with arson in connection with an attack last month on a mosque in nearby Escondido.

Owen Cruise, 20, saw Earnest every day during senior year at Mt. Carmel High School in San Diego when the two were in calculus and physics together.

They were also both in the school’s amateur radio club.

‘The way John T. acted is not representative at all of the way he was raised,’ Cruise said.

‘They are an outstanding family. Some of the finest people I’ve ever met.’

His father, John A. Earnest, is a popular physics teacher at Mt. Carmel, where he has worked for 31 years. 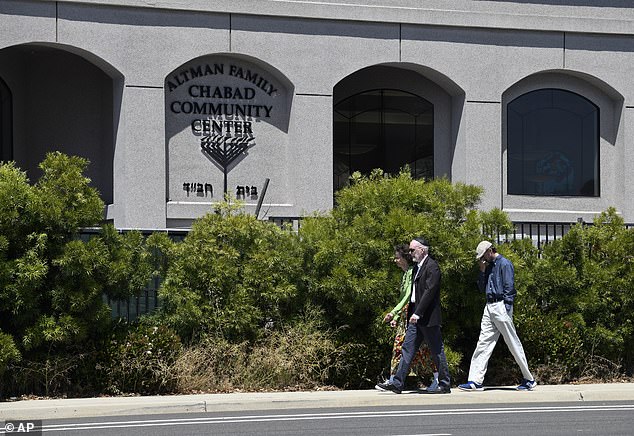 Synagogue members walk outside of the Chabad of Poway Synagogue Saturday in Poway, California 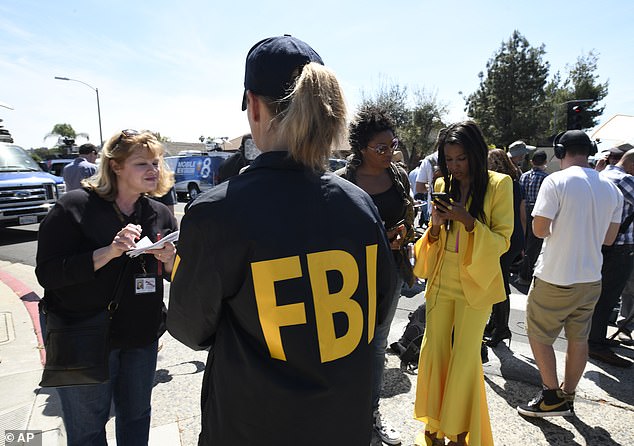 The suspect’s parents said their son and five siblings were raised in a family that ‘rejected hate and taught that love must be the motive for everything we do.’

‘To our great shame, he is now part of the history of evil that has been perpetrated on Jewish people for centuries,’ the parents said Monday in their first public comments.

‘Our son’s actions were informed by people we do not know, and ideas we do not hold.’

The parents, who are cooperating with investigators, refused to provide legal representation to their son, and he was represented by a public defender.

Earnest allegedly burst into the synagogue on the last day of Passover, a major Jewish holiday that celebrates freedom, and opened fire with an assault-style rifle on the crowd of about 100.

He fled when the rifle jammed, according to authorities and witnesses, avoiding an Army combat veteran and an off-duty Border Patrol agent who pursued him.

He called 911 to report the shooting and surrendered a short time later.

Lori Kaye, a founding member of the congregation, was killed.

Rabbi Yisroel Goldstein was shot in the hands, while Noya Dahan, 8, and her uncle Almog Peretz suffered shrapnel wounds.

Kaye, 60, was remembered for her kindness Monday at a memorial service at the packed synagogue in Poway, a well-to-do suburb north of San Diego.

An online writing by a person identifying himself as John Earnest and published shortly before the attack spewed hatred toward Jews and praised the perpetrators of attacks on mosques in New Zealand that killed 50 people last month and at Pittsburgh’s Tree of Life synagogue that killed 11 on October 27.

‘I’ve only been lurking here for a year and half, yet what I’ve learned here is priceless. It’s been an honor,’ he wrote.

Earnest, who evidently intended to live stream the attack, said he had planned the attack for four weeks.

‘If you told me even 6 months ago that I would do this I would have been surprised,’ Earnest wrote.

The FBI said it got tips about a social media post threatening violence against Jews about five minutes before the 11:30am attack.

The tips to an FBI website and hotline included a link to the anonymous post but did not offer specific information about its author or the location of the threat.

The bureau said employees immediately tried to determine who wrote it, but the shooting occurred before they could establish his identity.