What a difference a year makes: Streets that were eerily deserted at midnight were packed with New Year’s Eve revellers a year ago

A sequence of pictures shows the stark contrast between streets that were left eerily deserted at midnight and when they were packed with New Year’s Eve revellers one year ago.

Normally-bustling Trafalgar Square in London was empty as the clock struck midnight with officials putting up barriers to keep rule breakers away.

Pictures also capture the disparity between Scotland’s traditional Hogmanay celebrations in Edinburgh this year compared to previous ones, showing how the Covid-19 lockdown has greatly impacted the city.

Meanwhile, an ambulance and press photographers were seen waiting on the otherwise vacant street opposite the London Eye, with an image from 2019 showing hordes of people waiting to take photos of the fireworks in the same place.

Sadiq Khan confirmed that the traditional fireworks show would not go ahead back in September, saying that ‘we can’t afford’ to have large numbers of people congregating amid the coronavirus pandemic.

Instead, millions of locked-down Britons tuned into London’s light show to usher in the New Year from home, with a pre-recorded display using drones to depict images such as the NHS logo and Captain Sir Tom Moore. 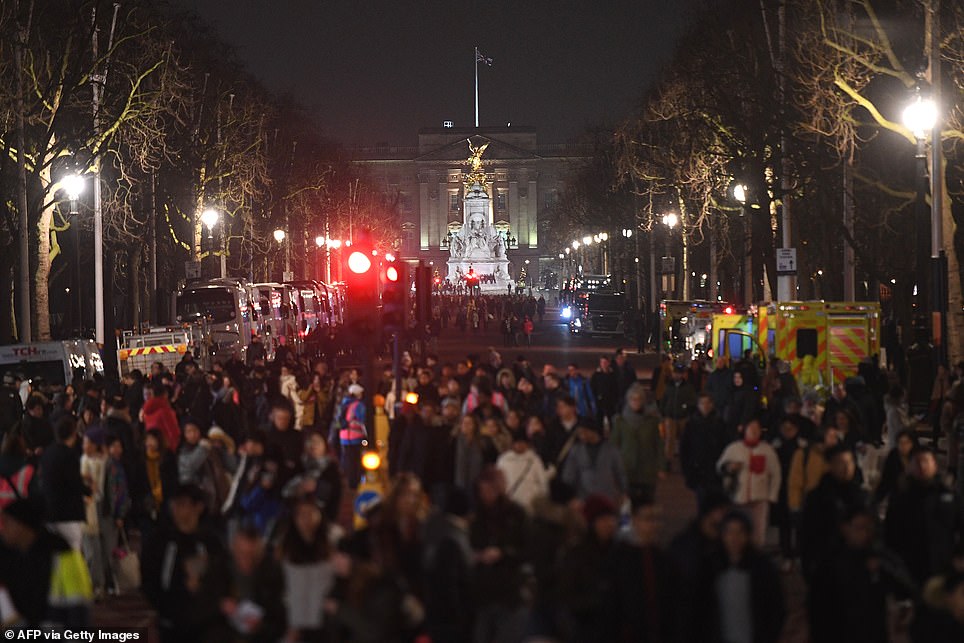 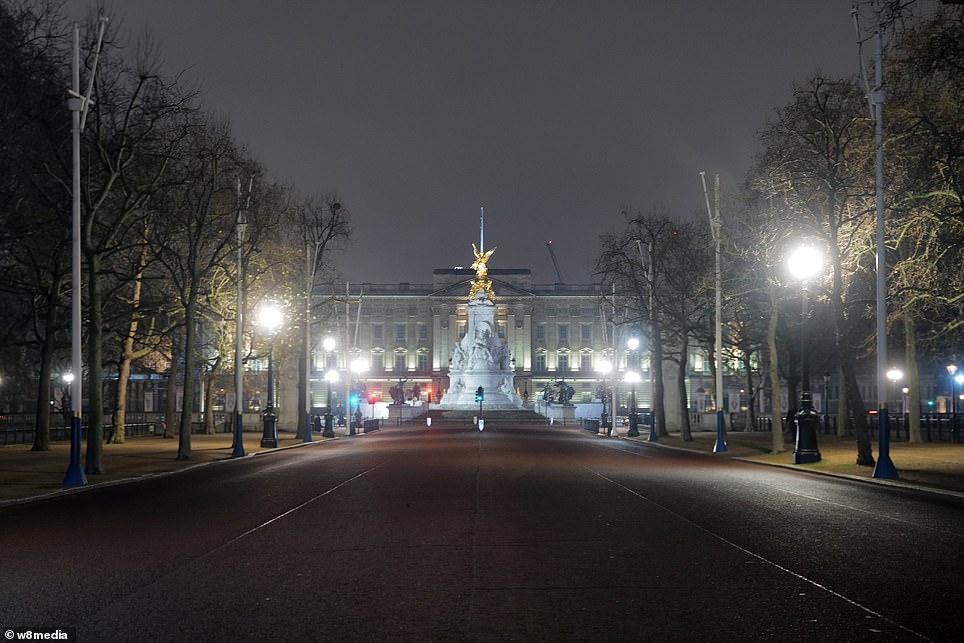 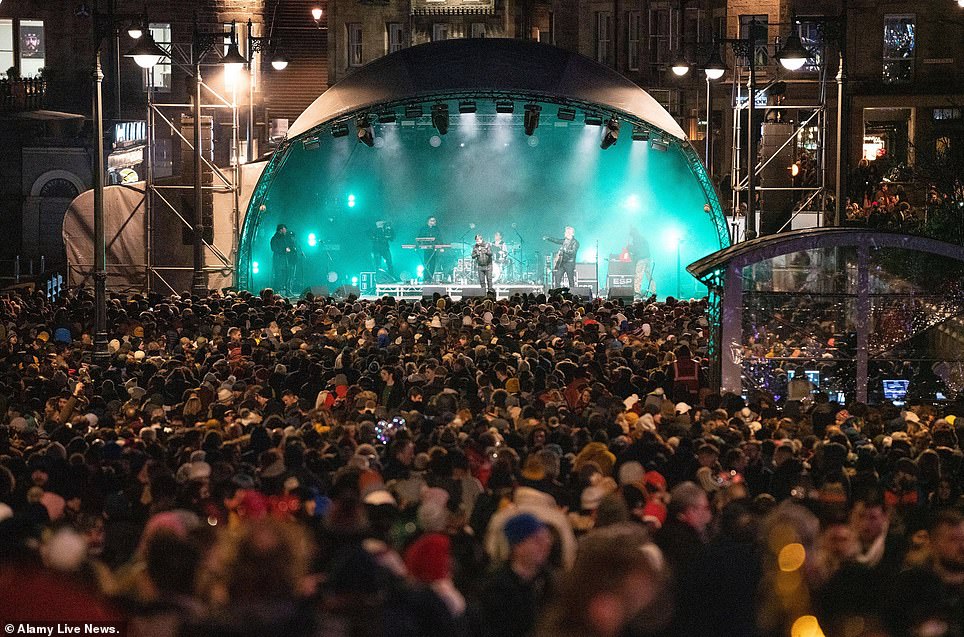 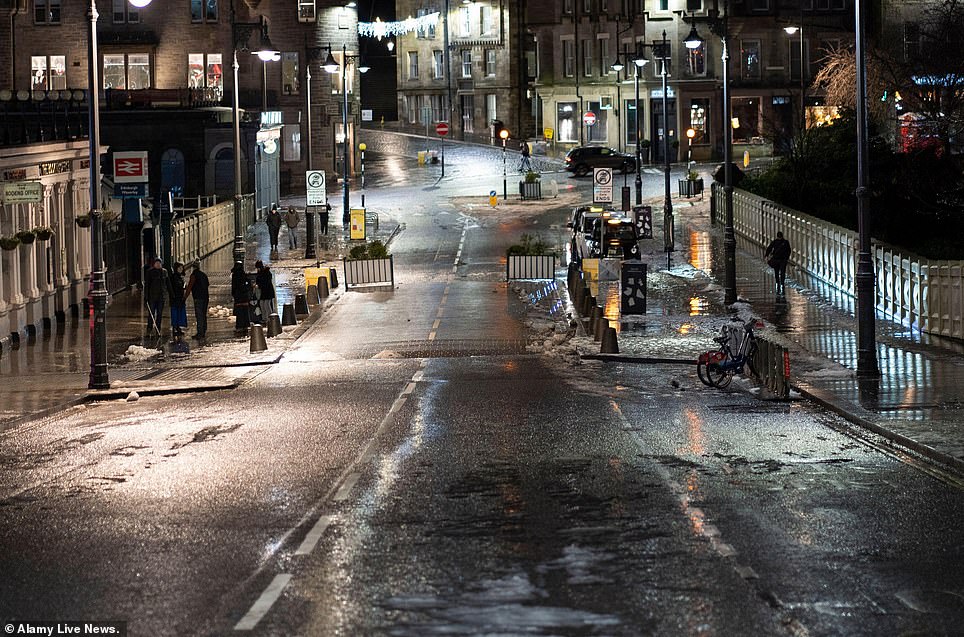 The display also featured an extract from a poem written by New Zealand-born Tomos Robertson – who goes by the name Tom Foolery – titled The Great Realisation.

As fireworks lit up the sky, a narrator read: ‘In 2020, a new virus came our way. We knew what must be done and so to help we hid away.

‘Old habits became extinct and they made way for the new. And every simple act of kindness was now given its due.’

Just seconds later, a bird appeared in the sky – in reference to the building of the Nightingale hospitals – after a clip of a news broadcast states: ‘Buildings were lit up in blue, the colour of the NHS’.

Towards the end of the show, the shape of a turtle appeared in the sky as Sir David Attenborough said: ‘Happy New Year. Our planet is unique. A living world of diversity and wonder. It’s also fragile.

‘With a new year comes the opportunity for change. And if we act, in 2021 we can make a world of difference.’

Fireworks were also seen over Tower Bridge in the capital.

Despite many watching the light show from home, some Londoners appeared to push their luck earlier in the evening with crowds gathering in Piccadilly Circus and on Westminster Bridge.

Under Tier 4 rules only two people from different households can meet outdoors, but police were seen speaking to crowds of at least five.

Earlier in the evening, fireworks lit up the sky over Newcastle in an incredible display watched by thousands from their windows. 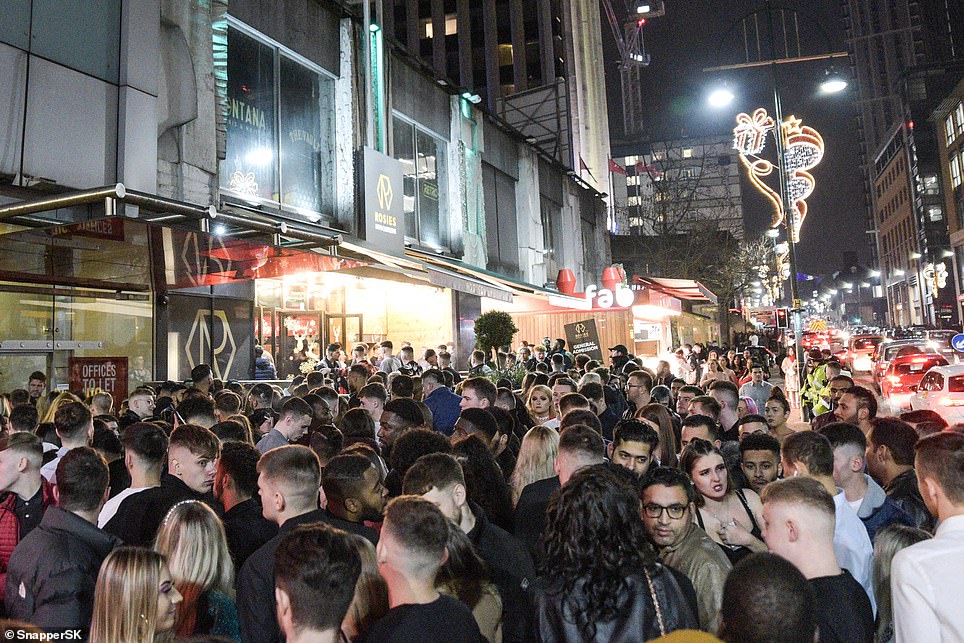 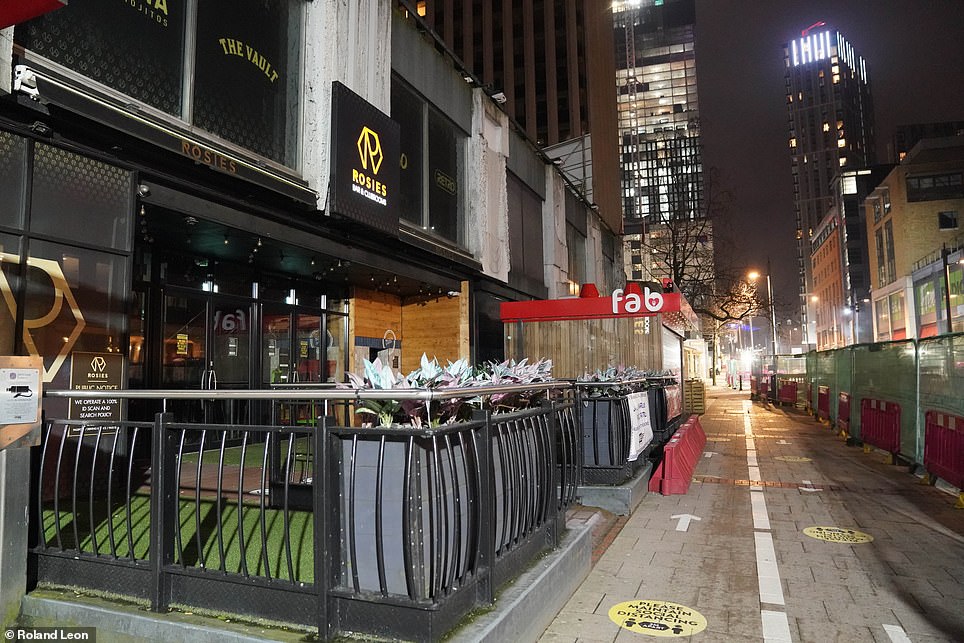 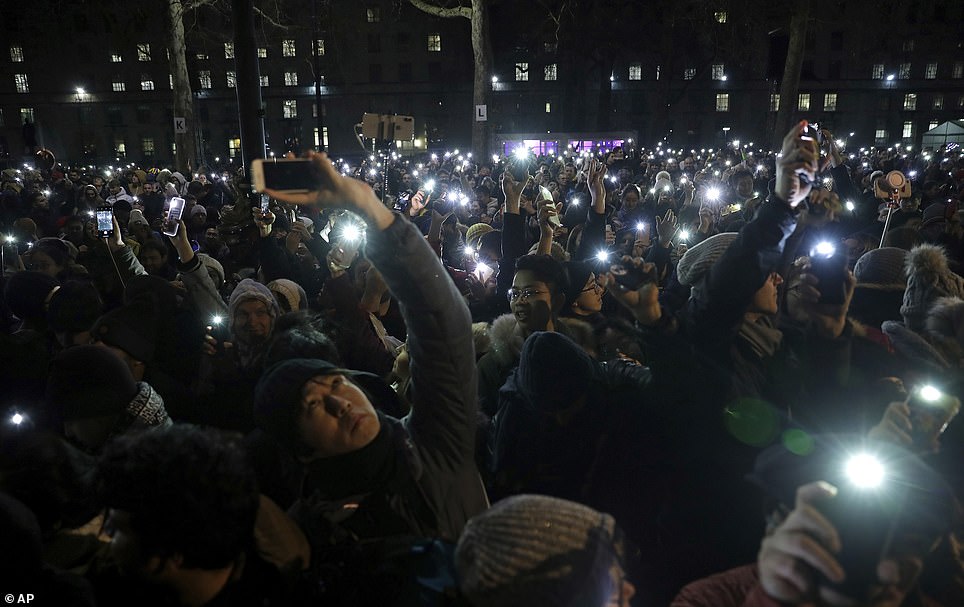 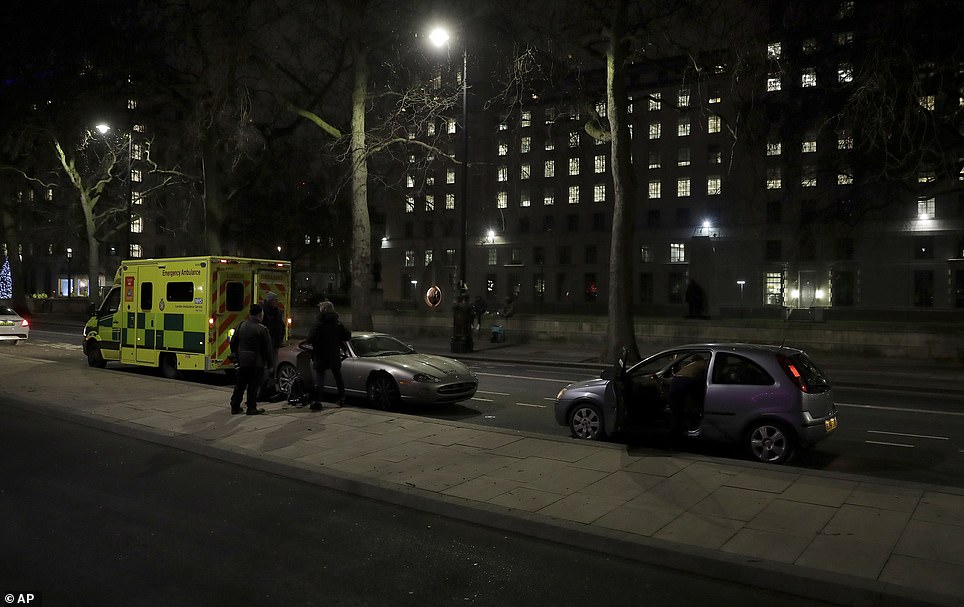 An ambulance and press photographers were seen waiting on the otherwise vacant street opposite the London Eye (right), with an image from 2019 showing hordes of people waiting to take photos of the fireworks in the same place (left)

Hogmanay celebrations were moved online, with First Minister Nicola Sturgeon earlier warning people to celebrate ‘responsibly and in line with the restrictions’.

She added: ‘To be clear, and I take no pleasure in saying this, that means no gatherings, no house parties, no first-footing. Instead, we should bring in 2021 in our own homes with just our own households.’

In contrast to the rest of the UK, locals on the Isles of Scilly were pictured enjoying a New Year’s Eve drink in the only three pubs in England which were open last night.

The islands’ 2,000-strong population is the only part of England still in Tier 1, with all other parts of the country having moved into Tiers 3 or 4.

What are the different rules for each Tier?

Tier One is the default and measures will not be allowed to get more relaxed in any part of England:

People from separate households cannot meet indoors and the rule of six applies outside;

All of the Tier Two rules apply to Tier Three as well as the following:

All of the above apply to Tier Four as well as the following: