A healthcare student has been jailed for more than eight years after he was sent a video recommendation to help him in his bid to join ISIS by a terrorist planning to behead Theresa May.

The film, given to Mohammad Aqib Imran, 22, was designed as a ‘gold card’ to help him join the terrorist group after his friend’s death.

Believing he would die in the attack, Rahman made a video recommendation vouching for his friend, intended as a message from beyond the grave. 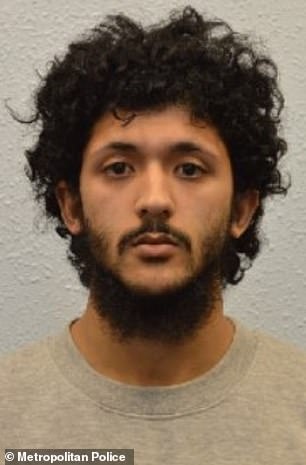 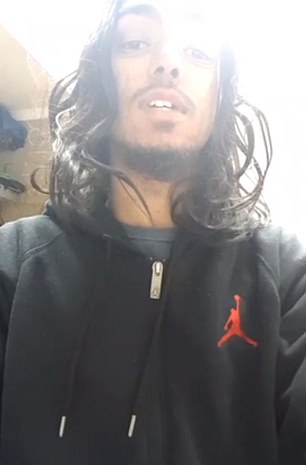 Mohammed Aqib Imran has been found guilty of trying to join ISIS in Syria. He was given a ‘gold card’ recommendation by fellow jihadi Naa’imur Zakariyah Rahman (right), who planned to kill Theresa May in a suicide attack on Downing Street 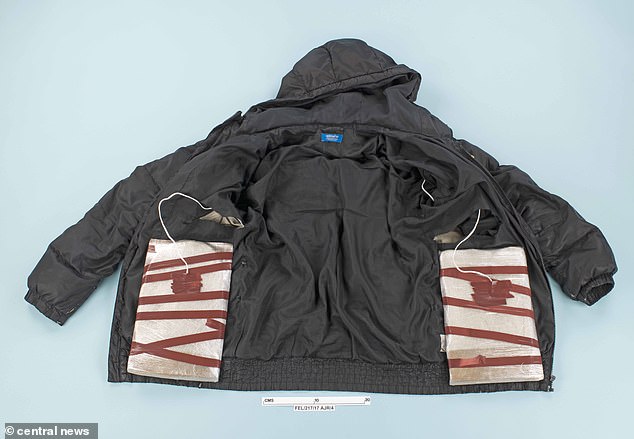 Naa’imur Zakariyah Rahman, 21, planned to launch a suicide bomb and knife attack on Downing Street (his jacket is pictured)

Meanwhile, Imran told an undercover MI5 officer in an online conversation that he was prepared to attack Britain and then escape to join ISIS as a ‘two in one’.

He said he would maintain a deception of going to sixth-form college and seeking work placements, while actually planning to join ISIS during his half-term holidays.

Imran was living with his grandmother in Sparkbrook, Birmingham while studying for a certificate in health and social care after failing his GCSEs.

His mother had confiscated his passport, fearing that he would use it to travel abroad and join ISIS, and he was desperate to get a fake one.

Sentencing him to eight and a half years in jail, the judge, Nicholas Hilliard, said he could not be sure that Imran had opened the video but added that planning to join ISIS was a ‘very serious offence’.

‘You were going to live in a brutal and extreme regime for the foreseeable future. Your aim was to join Islamic State or at least lend it your support,’ the judge added.

‘Some of the activities of Islamic State risk large scale death. This is not the case of someone travelling to join an inexperienced or amateur group.’

The judge said that once there Imran ‘would have been acting under instructions, doing whatever you were told to do.’ 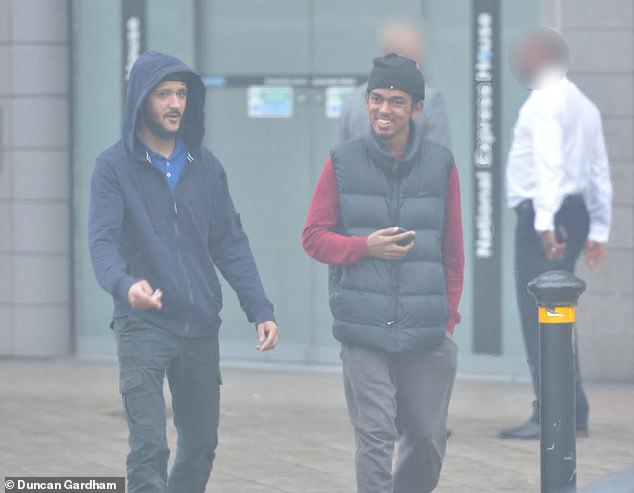 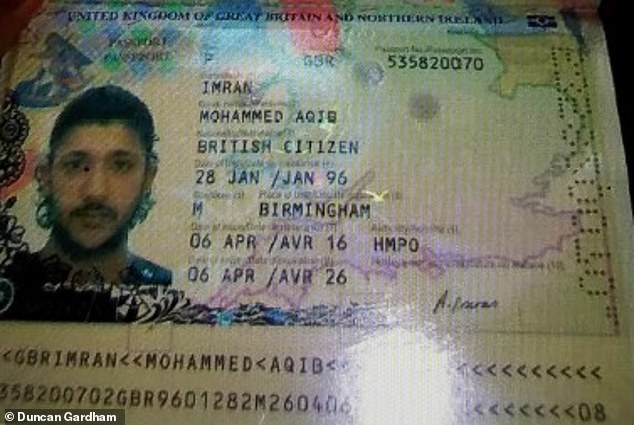 ‘I do accept you are a follower rather than a leader,’ he added. ‘But both are needed in terrorist activity.’

The judge also sentenced Imran to three years and nine months, concurrently, for possessing a terrorist document and ordered that he should serve an extended licence period of three and a half years.

He added: ‘I’m afraid that nothing I have seen suggests a change of heart from the defendant or any real insight into what would be necessary to achieve that.’

Imran met Rahman in Finchley, North London, days before Rahman was to receive the bomb and suicide vest he planned to use in his attack.

In fact, the explosives supplied to Rahman were fake devices, made by MI5, and handed over by an undercover officer.

Rahman said that he wanted to ‘take the head off’ the Prime Minister and told the undercover officer that it ‘feels good’ when he was given the bomb.

The judge said Rahman was a ‘very dangerous man’ and added: ‘That must have been evident from any time spent with him but also from the messages the defendant exchanged with him.’ 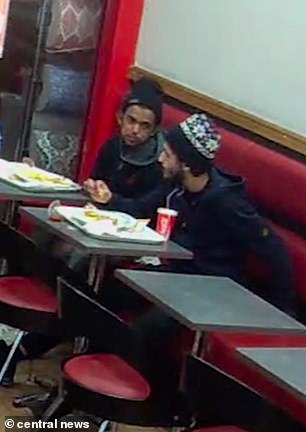 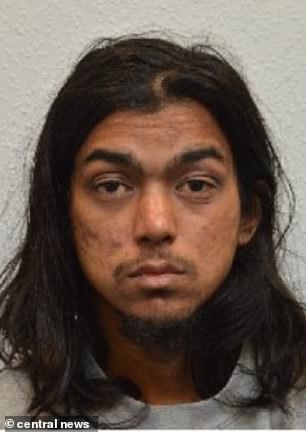 The pair were seen at Maemes Piri Piri on High Road, North Finchley, in November 2017, the day before Rahman’s arrest. Rahman is pictured, right, after he was detained by officers

Rahman was jailed for life in August but the jury could not decide if Imran had tried to join ISIS or its off-shoot in Libya. He was convicted in a retrial on December 27.

Rahman recorded the ‘tazkiya’ [recommendation] video, adopting the name Abu Ubaidah al-Britani and referring to Imran as Abu Sikkeen. He sent it to Imran just before 10.30pm on November 24, 2017.

In the video, Rahman says: ‘Wa alaykum wa rahmatullah wa barakatu [Peace be upon you and Allah’s blessing and mercy] I am Abu Ubaidah al-Britani. I’d just like to give my tazkiya [recommendation] for my beloved brother Abu Sikkeen.

‘Inshallah, me and brother are attaining great success and the arsh [throne] of Allah and my brother in aqeedah [faith], my brother in Islam, may Allah bless him, amen.’

Mark Heywood QC, prosecuting, said the video was the ‘best gift that he could bestow on his friend’ and that Imran wanted the video to ‘use as a gold card introduction to those engaged in jihad abroad.’ 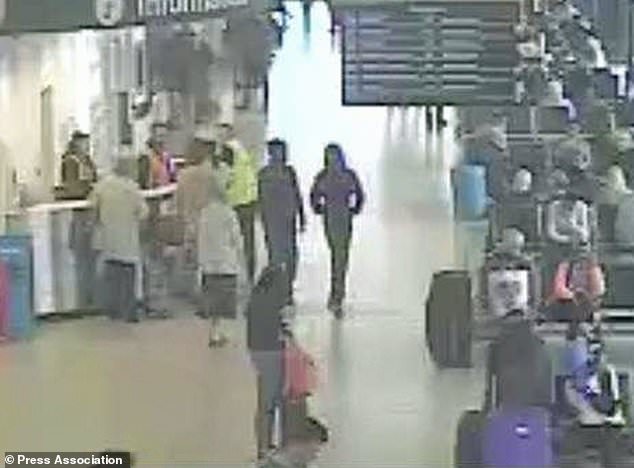 Three days later, on November 27, Rahman was under surveillance as he travelled from Finchley, North London to meet Imran, who arrived at Victoria coach station from his home in Birmingham just after 1pm.

The pair travelled by tube to Woodside Park in Finchley and at 2.35pm both men entered a shop called Keen-Tech Communications on Ballards Lane.

They left two hours later to eat at the Maeme Piri Piri chicken restaurant on the High Road, before returning to the shop for three hours.

Both men left just after 9pm and Imran headed for Victoria and arrived back at Birmingham’s Digbeth coach station just after midnight.

A surveillance officer recorded that Imran stopped to talk to a homeless man and give him some change.

Both men were arrested on November 28, after Rahman picked up the fake bombs from an undercover officer in Latimer Road, West London.