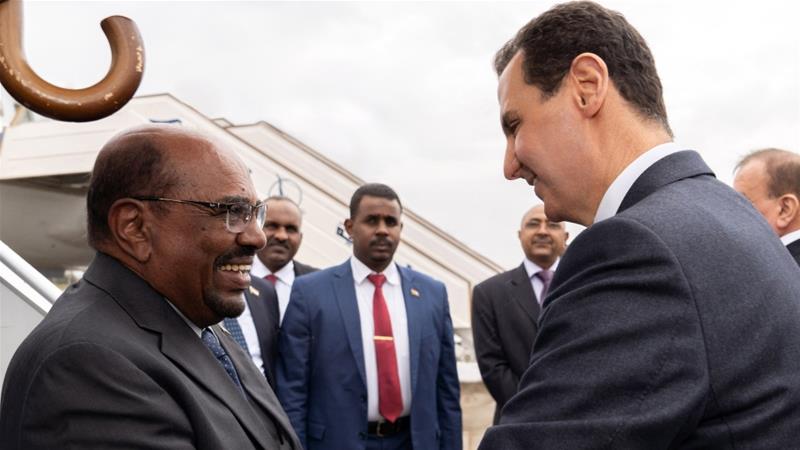 Syria’s state-run news agency SANA said al-Bashir was greeted on Sunday at the capital’s airport by Syrian President Bashar al-Assad before they both headed to the presidential palace.

The two leaders discussed bilateral ties and the “situations and crises faced by many Arab countries”, the Syrian presidency said.

Photographs released by SANA showed them shaking hands at the airport in front of a Russian jet that appears to have brought the Sudanese president to Syria. Russia, a key ally of Assad, maintains an airbase southeast of the Syrian city of Latakia.

SANA quoted al-Bashir as saying during the meeting that he hopes Syria will recover its important role in the region as soon as possible. He also affirmed Sudan’s readiness to provide all that it can to support Syria’s territorial integrity.

For his part, Assad thanked al-Bashir for his visit, asserting that it will give strong momentum for restoring relations between the two countries “to the way it was before the war on Syria”, SANA said.

The reason for al-Bashir’s visit was not immediately clear.

Syria was expelled from the 22-member Arab League soon after war broke out in 2011. Arab countries have sanctioned Damascus and condemned al-Assad for using overwhelming military force and failing to negotiate with the opposition.

But with the war in Syria winding down in favour of al-Assad as his Iranian- and Russian-backed forces recapture key cities and population centres, some Arab officials have expressed interest in exploring the restoration of ties.

In October, al-Assad told a Kuwaiti newspaper that Syria had reached a “major understanding” with Arab states after years of hostility. He did not name the Arab countries in the interview, which was his first with a Gulf paper since the war erupted, but he said Arab and Western delegations had begun visiting Syria to prepare for the reopening of diplomatic and other missions.

Just a week prior to that, Bahrain’s foreign ministers surprised observers by embracing his Syrian counterpart on the sidelines of a UN General Assembly meeting in New York. The warm encounter raised questions about whether some Gulf countries, most of them sworn enemies of al-Assad ally Iran, are reconsidering their relations with Syria.

Jordan also re-opened the Nassib crossing into Syria in October, while even neighbouring Israel has taken steps towards improving relations with the Assad governent – its Quneitra crossing in the occupied Golan Heights was partially re-opened that same month under Russian military supervision.

Meanwhile, Turkey, the last major backer of the Syrian opposition cornered in a part of northern Syria, has said it is prepared to engage with Damascus if the al-Assad government held and won free and fair elections.

“If it is democratic election, and if it is a credible one then everybody should consider (working with him),” Turkish Foreign Minister Mevlut Cavusoglu said at the Doha Forum in Qatar’s capital when asked whether Turkey would work with al-Assad.

“At the end, Syrian people should decide who is going to rule the country after these elections,” Cavusoglu added.

Nader Hashemi, director of the Center for Middle East Studies at the University of Denver, said Arab countries are attempting to play a role in the reconstruction of Syria.

“I think they are trying to, perhaps, woo Assad away from his alliance with Iran,” he told Al Jazeera.

“The number one priority for the Assad regime today, after crushing all opposition to his rule is economic reconstruction. The West is not going to invest in that economic reconstruction but there are very wealthy Arab states that do have the financial resources so I suspect part of the agenda here is to see whether Bashar al-Assad can be influenced financially with reconstruction aid in exchange for weakening his alliance with Iran,” he added.

Syria’s long-running war has killed hundreds of thousands of people and forced millions from their homes.

Al-Bashir has been Sudan’s leader since 1989 and is wanted by the International Criminal Court in the Netherlands to face war crimes charges stemming from a conflict in his own country.