Sun-seekers are flocking to Britain’s holiday hotspots for a scorching bank holiday weekend – sparking local complaints about two-hour waits to be served in the pub.

Day-trippers have piled in to several picturesque seaside resorts across Britain today, with temperatures set to hit around 75F (24C) in parts of the country.

Sun-seekers basked in glorious sunshine and enjoyed clear blue skies on the packed beach on Lyme Regis, punts and kayaks filled the River Cam in Cambridge, and others took a cooling dip in the sea across the country on Blackpool Beach.

Droves of lockdown-weary Brits made the journey to Devon in a bid to enjoy the hot weather ahead of Bank Holiday Monday – which is set to see temperatures rise to a toasty 77F (25C).

A local who visited The Imperial in Exeter said his family had to wait more than two hours for a round of drinks as the city’s beer gardens saw an influx of revellers to enjoy their time off in the sun.

The angry customer, whose order included an Abbot Ale, pint of Carlsberg shandy and a lime and soda, told Devon Live: ‘When (we) ordered at 2.55pm, we didn’t get our drinks until two hours later.

‘It is absolutely ridiculous I’m sorry to say. It was full, basically the security were excellent, they weren’t letting people into the garden area until there was a table free.

‘What nobody told you when you arrived, is that you would have to wait an hour and a quarter to actually get a drink. And of course, the app keeps accepting orders, because nobody switches it off, which is Wetherspoons’ interests.’

It comes ahead of a scorching June – tipped to be the hottest on record – as 88F (33C) ‘European heat pulses’ bake the country.

Lyme Regis, Dorset. Holidaymakers, day trippers and locals flocked to the picturesque seaside resort of Lyme Regis to soak up scorching hot summer sunshine on the May Bank Holiday Weekend. Sun seekers basked in glorious sunshine and enjoyed clear blue skies on the packed beach while others took a cooling dip in the sea 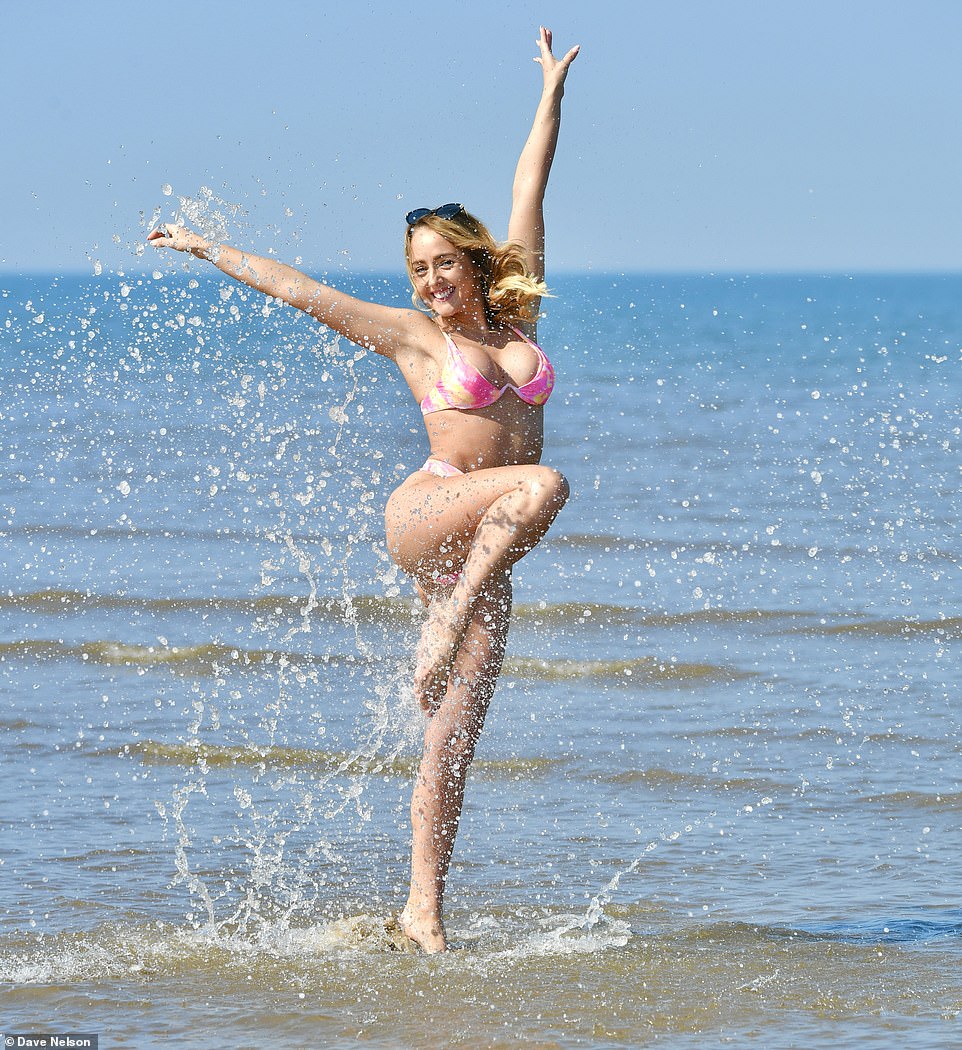 Cami McArdle, 25, from Blackpool, makes a splash on Blackpool Beach. Day-trippers have flocked to several picturesque seaside resorts across Britain today, with temperatures set to hit around 75F in parts of the country 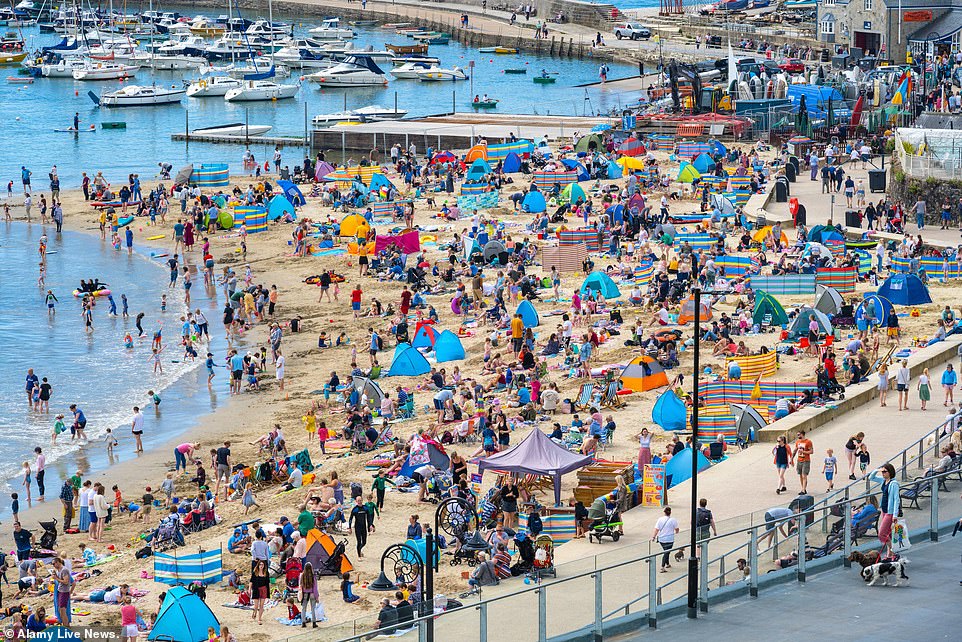 Pictured: Lyme Regis. Sun seekers basked in glorious sunshine and enjoyed clear blue skies on the packed beach while others took a cooling dip in the sea 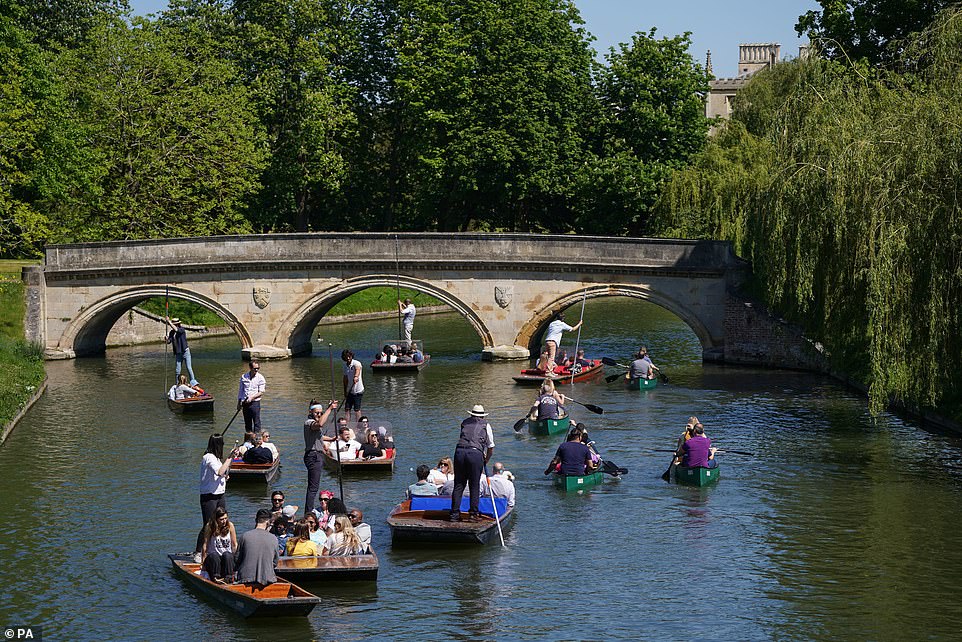 Punts and kayaks fill the River Cam in Cambridge, with the bank holiday weekend expected to bring blue skies and widespread sunshine 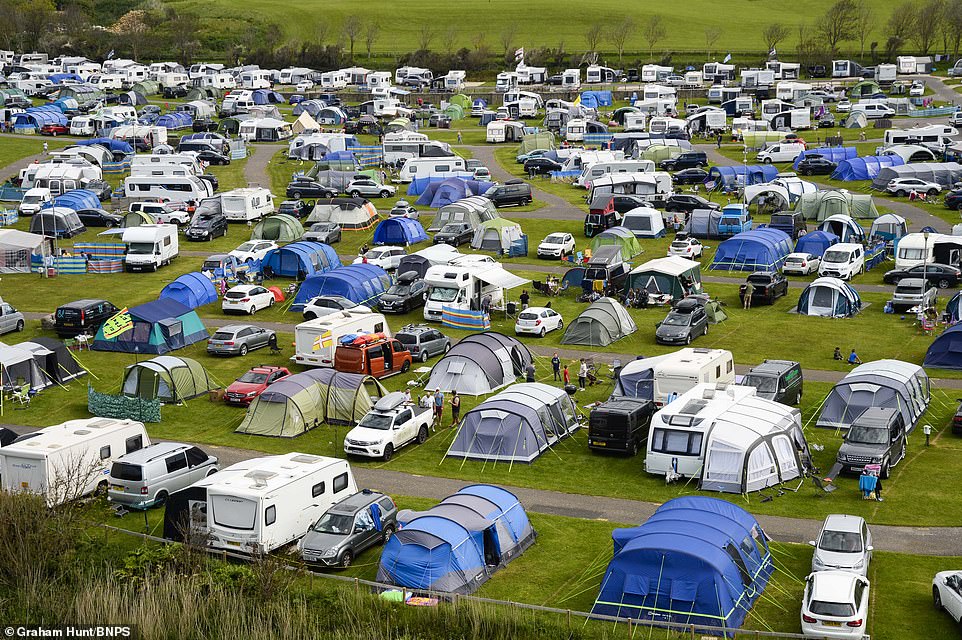 Freshwater Beach Holiday Park at Burton Bradstock in Dorset is packed with holidaymakers caravans, tents and camper vans on a morning of warm hazy sunshine during the during the bank holiday weekend 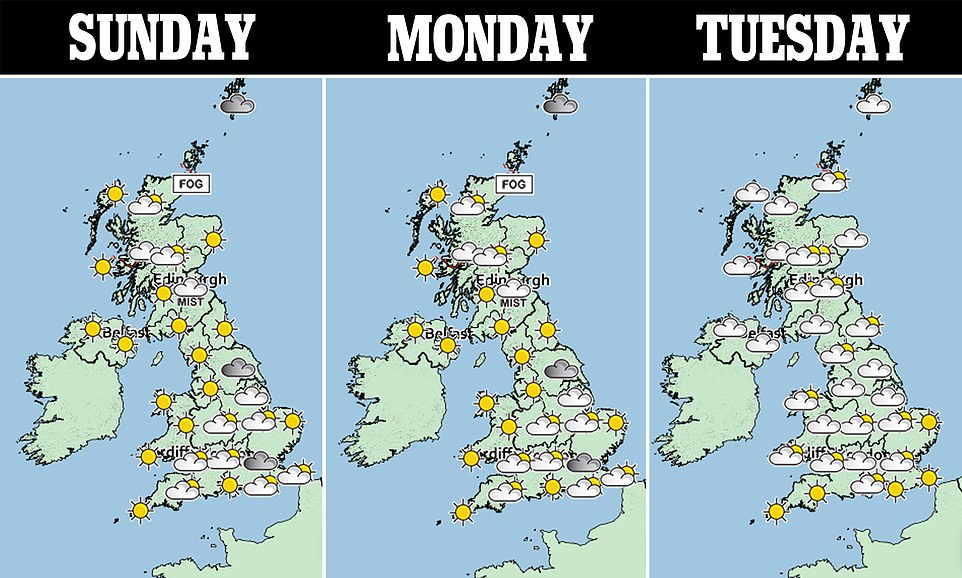 The first major sizzle is due later in half-term week, with more hot stints – all reaching at least 82F (28C) – in late June, two times in July, possibly twice in August and once in September, said the world’s biggest commercial forecaster, The Weather Company.

Each roast will last up to five days – with 91F (33C) in July as hot air billows north from the continent.

A heatwave is officially a period with temperatures over the 82F (28C) mark.

Leon Brown, head of meteorological operations at The Weather Company’s Weather Channel arm, said: ‘Six periods of heat pulses, each reaching the high 20s, are forecast in this summer.

‘Each spell would last for up to five days and reach 28C – 5C above the 23C average – which is when people start saying ”this is a heatwave’.’

’28C could be seen next weekend, and again into the fourth week of June.

‘July should have two events with temperatures over 30C, with 33C expected, as heat comes up from Europe.

‘August may be more unsettled, but still with of hot spells at the start and possibly the end, and heat in early September also.’

A Met Office forecaster said: ‘The South-East will probably be warmer to June 11, then June 11-25 has southern areas possibly having occasionally spells of warmer-than-average weather.’

The Met Office also said today would be ‘dry, warm and sunny this afternoon’. 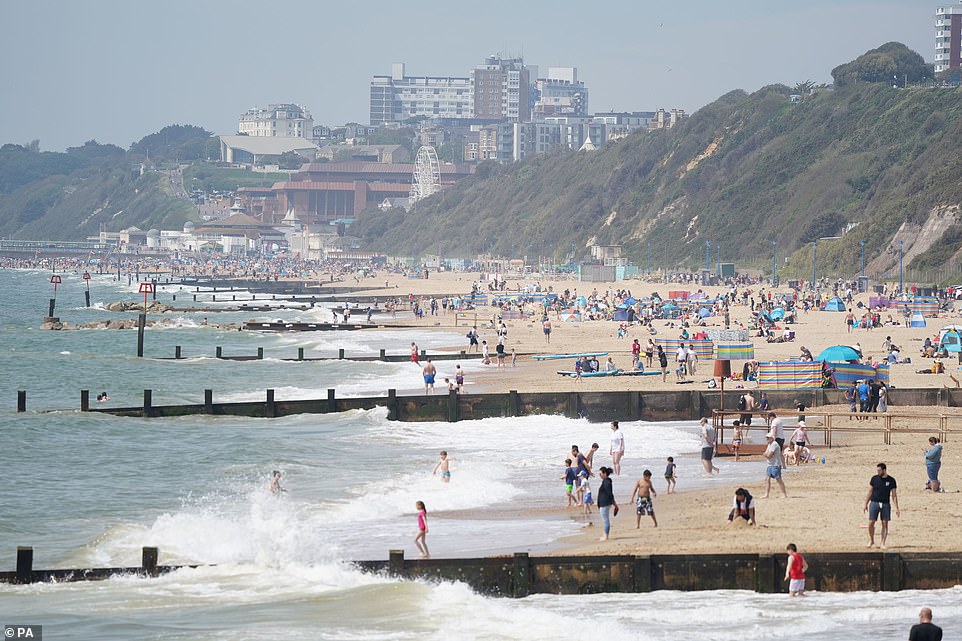 A meteorologist said: ‘It could be the warmest day of the year so far as temperatures approach the mid 20s.

‘However, the east coast will stay chilly and misty in places.’

Fine and dry conditions were expected to continue on Sunday as Britons made the most of their newly restored freedoms following the lifting of many lockdown restrictions.

Evening cloud was forecast to spread from these coastal areas to eastern counties and parts of the Midlands in the evening, but a dry night with clear periods was predicted elsewhere throughout the UK.

The weekend started well as London and the South East recorded highs of 21C on Saturday, sending people flocking to beaches and parks.

In Cambridge, a floating bar did a roaring trade with the punters out on the River Cam and all those lining the banks.

But before catching some rays, the Met Office has warned the public to make sure they don plenty of sun cream as UV levels will be high or very high

The Met Office said: ‘Keep covered and wear a hat and sunglasses, spend time in the shade and use a high factor sun cream with good UVA protection to protect yourself.’