Two fires north-east of Melbourne, that were allegedly deliberately lit, will be scrutinised at a hearing for two brothers accused of attempting a terror act, to determine whether they stand trial.

Ari and Aran Sherani, aged 20 and 19 respectively, are accused of lighting a fire in bush in Humevale on February 18, an act that counter-terrorism investigators allege was an attempt to engage in a terror act. 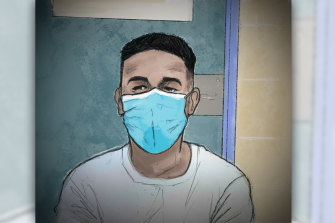 A court sketch of Ari Sherani from March.Credit:Mollie McPherson/Nine News

The brothers, from Epping, were arrested on March 18, the day after Aran Sherani allegedly bought a knife that he intended to use in a terror attack. He is also accused of being a member of Islamic State.

The brothers sat next to each other at a table in custody on Friday, as Melbourne Magistrates Court was told their lawyers wanted to test the evidence at a five-day hearing next year, where witnesses would be questioned over the fire at Humevale and another fire at nearby Kinglake West.

Prosecutor Daniel Johns confirmed the Humevale fire had the potential to pose a danger to people.

Ari Sherani is charged solely in connection to the Humevale fire, while his younger brother faces four charges, including an allegation he also assaulted someone in Preston eight days before he allegedly bought the knife. 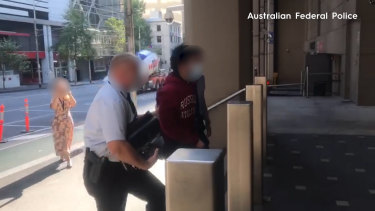 Aran Sherani (right) is escorted into the Australian Federal Police headquarters in Melbourne after his arrest.Credit:AFP

After the Sheranis’ arrests, police said the alleged assault and the Humevale fire could have been motivated by Islamic extremism.

Deputy chief magistrate Susan Wakeling on Friday remanded the brothers in custody for them to appear in a five-day hearing in February that will determine whether they stand trial. They are yet to enter a plea.