Myanmar’s detained civilian leader Aung San Suu Kyi vowed her pro-democracy political party would continue its work despite being slated for dissolution in her first public appearance since her government was overthrown in a military coup.

In a message passed to her lawyers ahead of a court appearance in the capital Naypyidaw on Monday, she said the National League for Democracy would keep serving the people of Myanmar, even after junta-appointed election authorities last week said they would dissolve the party. Suu Kyi, who has been confined to her home since the February 1 overthrow, has been formally charged with six criminal offences including incitement and violating the Official Secrets Act. 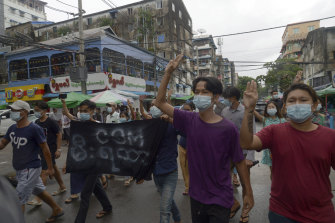 Anti-coup protesters during a demonstration against the military takeover, in Yangon, Myanmar, on Monday, May 24.Credit:AP

The Union Election Commission said on Friday the NLD would be dissolved over allegations of fraud during last year’s election and its leaders would be prosecuted as traitors. Following the coup, the army pledged to hold fresh elections following a state of emergency that could last as long as two years.

“She is apparently in good health, and looks strong,” San Marlar Nyunt said of Suu Kyi after a 30 minute meeting in which they largely spoke about her legal fight. “We only care about winning all the charges against her, so our discussions were all about how to defend them. We didn’t have enough time to talk about any other things.”

The lawyers also met with Win Myint, who was president in the government that Suu Kyi led as state counsellor, and a defendant on some of the same charges she faces.

Suu Kyi had been charged with several criminal offenses, but her only previous court appearances had been by video link, and she had not been allowed to meet in person with any of her lawyers.

These are two counts of violating the Natural Disaster Management Law for violating COVID-19 pandemic restrictions during the 2020 election campaign; illegally importing walkie-talkies that were for her bodyguards’ use; unlicensed use of the radios; and spreading information that could cause public alarm or unrest.

The most serious charge that Suu Kyi faces is breaching the colonial-era Official Secrets Act, which carries a penalty of up to 14 years’ imprisonment, but that is being handled by a separate court.

Several cases are also pending against other senior members of Suu Kyi’s party in addition to Win Myint, the ousted president.

Australian economist Sean Turnell, who served as Suu Kyi’s adviser and was also detained on the day of the army’s takeover, has been charged with violating the Official Secrets Act.