I was talking about borscht the other day with a friend — you know, as one does.

Perhaps we were discussing the long-gone resorts of the Catskills, in the so-called Jewish Alps.

During their heyday, in the 1940s, ’50s and ’60s, these summer resorts hosted generations of Jewish Americans, at a time when virulent anti-Semitism prevented their admittance to non-Jewish resorts. Families would spend the whole summer in these mountains enclaves to escape the sweltering city. There were daily activities and nightly entertainment. Comedians who worked the circuit called it the Borscht Belt. And quite a lot of cold borscht was served in that era before air-conditioning. 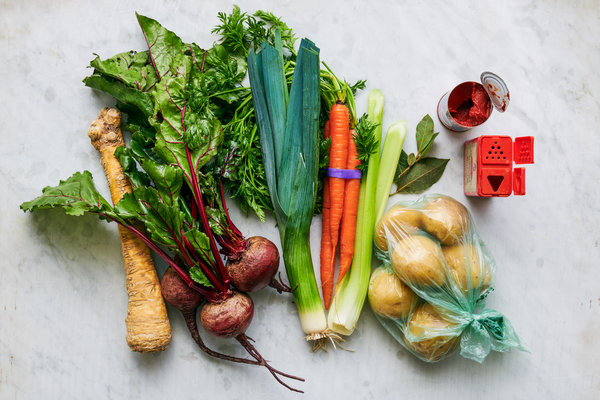 But perhaps we were just chatting about borscht. To me, borscht is first and foremost about beets and the brilliant red color, but for my friend, not so much.

She had vivid memories of eating borscht, prepared by her somewhat-fierce Russian-Jewish grandmother, every Sunday as a child. My friend’s eyes grew wide as she told the story. Always the borscht, with brisket chunks and cabbage and carrots and tomato, cooked forever, but never with beets. With sour cream, yes.

Broadly, there are white versions, made with potatoes and cabbage; green versions made with sorrel and spinach; most familiar to some is the red version, made with beets. There is limpid ruby-red borscht broth, served hot or cold. There is perky pink borscht from a blender, whirled with sour cream or yogurt and served in a glass, ice-cold.

The important part of making borscht is getting the sweet-to-sour balance just right. From beets, carrots and leeks, you get sweet (sometimes with an additional spoonful of sugar). For sour, you’ll need a little apple-cider vinegar (or your vinegar of choice; tarragon vinegar or sherry vinegar are other options), plus a squeeze of lemon or lime. Most people agree that borscht should veer toward the tart side. Old recipes call for adding sauerkraut juice, fermented beet juice or kvass, a kind of fermented sour beverage made from rye bread.

Though I appreciate borscht simmered with a meaty soup bone, I sometimes crave a clean, lighter-tasting vegetarian red borscht, quickly cooked in a makes-its-own broth kind of way. It is rather unbelievable how a mix of fresh vegetables simmered in plain water can taste so very good. A dash of caraway, a good spoonful of paprika and a sure hand with seasoning steer the soup in the right direction.

A little horseradish in the sour cream? Couldn’t hurt. 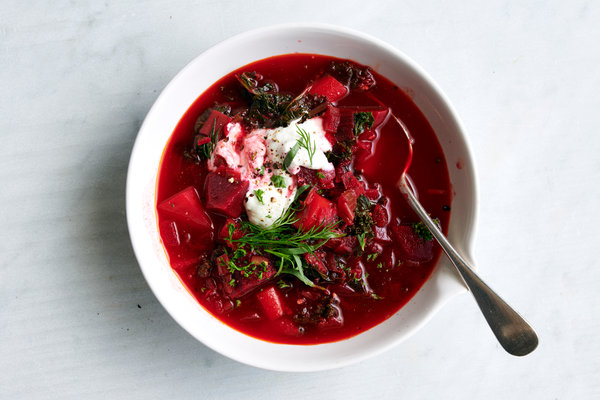