Lockerbie ‘bomber’ is FOUND living in AMERICA: Syrian-born father accused of planting device on Pan Am plane 30 years ago is discovered in a Washington DC suburb – but he says claims ‘are all lies’

The Syrian-born Lockerbie ‘bomber’ accused of planting an explosive on a Pan Am plane has been discovered living as a US-citizen in a suburban town in Washington  DC under a different name.

Allegedly identified as Abu Elias, the father claims it was ‘complete lies’ that he was involved in the terror attack that killed 270 people 30 years ago, the Daily Mirror revealed.

Elias hit out at former Cold War spy and author Douglas Boyd who claimed Libyan Abdelbaset al-Megrah – the man convicted of the attack- was falsely imprisoned.

And the suspect, who lives 20 miles from the ­Lockerbie Cairn Memorial at Washington, told the Daily Mirror he was innocent. 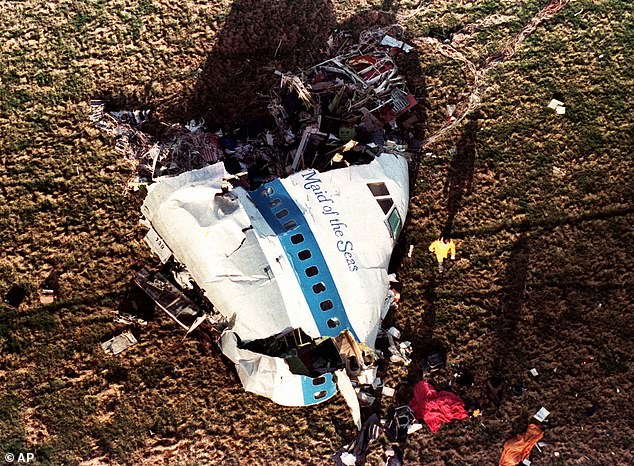 Pictured is the part of the wreckage from Pan Am Flight 103. The Syrian-born Lockerbie ‘bomber’ has been discovered living as a US-citizen in a suburban town in Washington under a different name 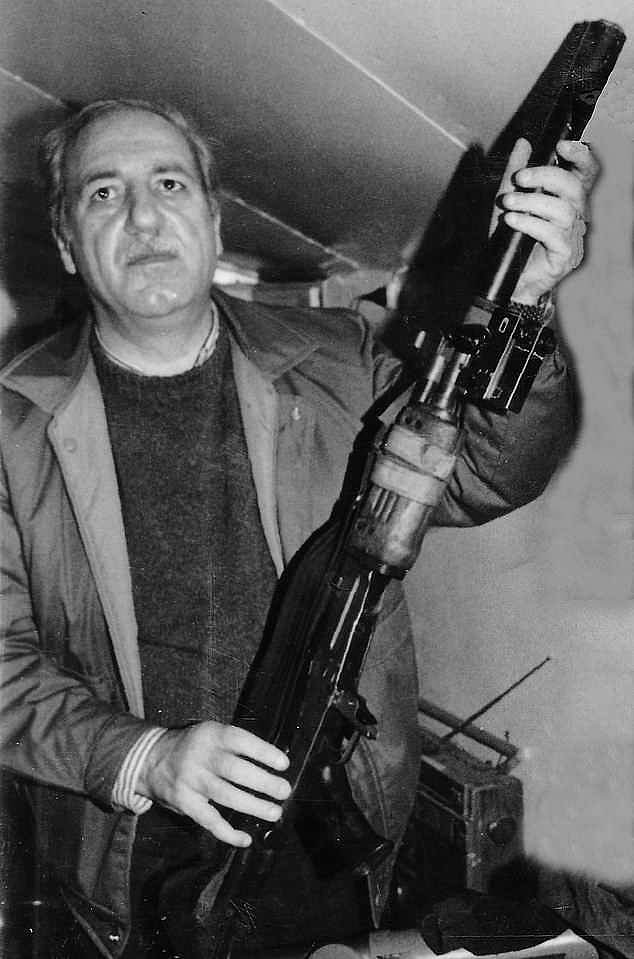 Author Boyd claimed the man is now working at a school in the US capital under the name Basel Bushnaq.

Mr Boyd told the Mail on Sunday that shortly after the disaster, the Palestine Liberation Organisation, keen to boost its credentials as a political rather than terrorist organisation, published an 80-page report claiming the PFLP-GC had been paid to blow up the plane – by Iran.

It also named Elias as a prime suspect for breaking into the Pan Am baggage store in Heathrow and planting the bomb. The baggage handling area had been broken into with bolt croppers shortly before Flight 103 took off.

Campaigners have long claimed it was Elias who planted the brown Samsonite suitcase on the Pan Am 103 flight before it took off for New York. 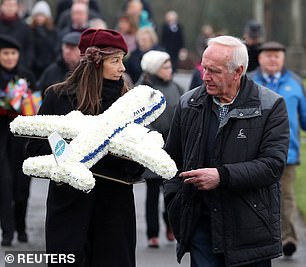 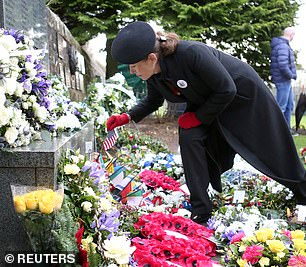 People gather for the service and wreath-laying at the Memorial Garden in Dryfesdale Cemetery, on the morning of the 30th anniversary of the bombing of Pan Am flight 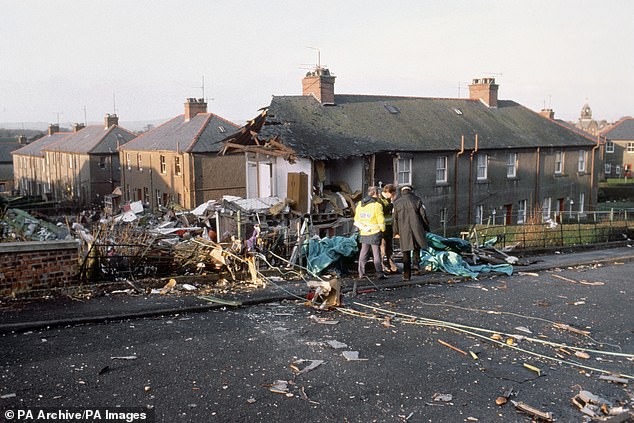 This comes after the daughter of a former terrorist said her father admitted to relatives that his cell leader, Ahmed Jibril, led the 1988 plot to down Pam Am 103, which was blown up by an explosive stored in a suitcase in the hold. 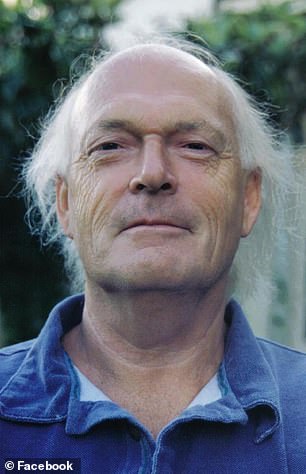 Author Boyd, in his recent book Lockerbie: The Truth, claims it was Jibril’s nephew Elias that broke into the baggage storage at Heathrow to plant the device

Jordanian Saha Kheersat, 43, claimed her father Marwan Khreesat left his wife a dossier of evidence showing that Jibril – Marwan’s boss in a Palestinian terror group – was paid millions of pounds by Tehran to mastermind the attack.

Author Boyd, in his recent book Lockerbie: The Truth, claims it was Jibril’s nephew Elias that broke into the baggage storage at Heathrow to plant the device.

The Palestine Liberation Organisation and the CIA have also previously named Elias as the suspect of the bombing.

Asked by the Daily Mirror if he was ever known under the name of Abus Elias, he said: ‘No. I have been subject to more than 90 hours of investigation from Scotland Yard and the FBI, and they are through with me.’

He added: ‘I’m not the nephew to no one. The bit you are talking about is full of f***ing lies. It’s a bloody lie.’

When asked by The Daily Mirror where he was on December 21, 1988, he said: ‘I was in the United States. The FBI saw my journal they know I was in South West Washington DC handling my job.’

He later admitted that the identity he is currently living under is not his birth name.

And the suspect branded Mr Boyd a ‘son of a b***h’, the Daily Mirror revealed.

Author Boyd wrote in his book: ‘Megrahi was convicted on a tissue of lies. Little of the evidence against him can be taken at face value. 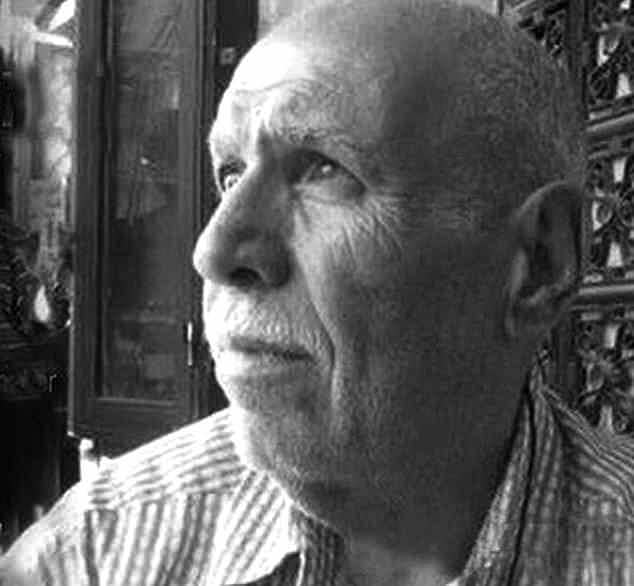 Jordanian Saha Kheersat, 43, claimed her father Marwan Khreesat (pictured) left his wife a dossier of evidence showing that Jibril – Marwan’s boss in a Palestinian terror group – was paid millions of pounds by Tehran to mastermind the attack

‘It is a story of incompetence, vengeance, political expediency and then a cover-up orchestrated from the highest levels in London and in ­Washington – where the real bomber is said to live today, under cover of a witness protection scheme.’

The former Libyian security officer Megrahi was convicted in 2001, the only person found guilty of the bombing.

He was jailed for 27 years but died of prostate cancer at home in Tripoli aged 60 in 2012 after being released on compassionate grounds in 2009.

It is believed he planned to reveal Elias’ identity before he died in a bid to clear his own name.

But shortly after he was freed SNP politician Christine Grahame used Scottish Parliamentary privilege to identify the man she named as Elias.

The Scottish Criminal Cases Review Commission (SCCRC) announced earlier this year that a full review of the case is to be carried out to decide if a fresh appeal against Megrahi’s conviction can be made. 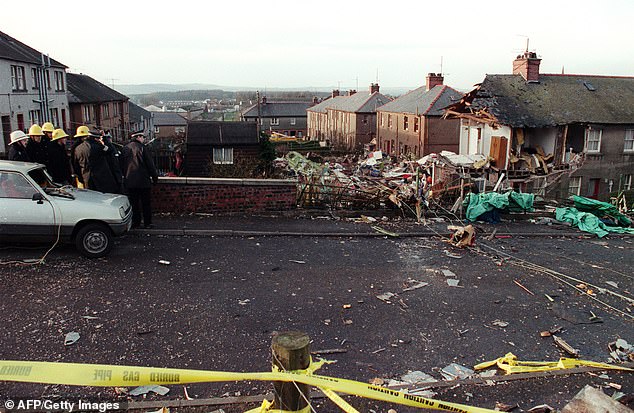