Taiwan made history on Friday with Asia’s first legal gay weddings as same-sex couples tied the knot in jubilant and emotional scenes, the culmination of a three-decade fight for equality.

The weddings, which came a week after lawmakers took the unprecedented decision to legalise gay marriage despite staunch conservative opposition, places Taiwan at the vanguard of the burgeoning gay rights movement in Asia.

Some dozen couples were among the first to arrive at a government office in downtown Taipei to legally register their relationships as marriages. 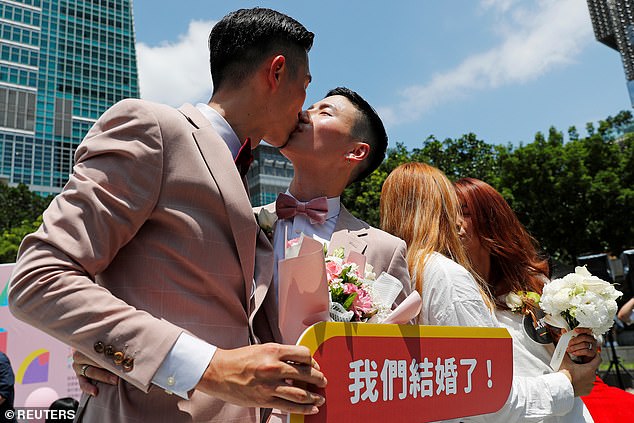 Taiwan became the first country in Asia to hold same-sex marriage ceremonies on Friday, a week after politicians voted to legalise it 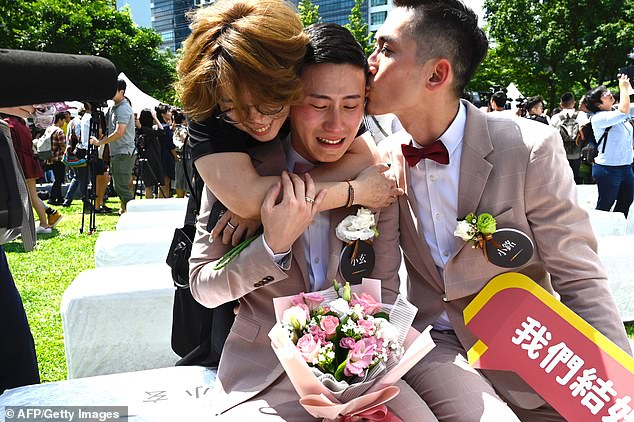 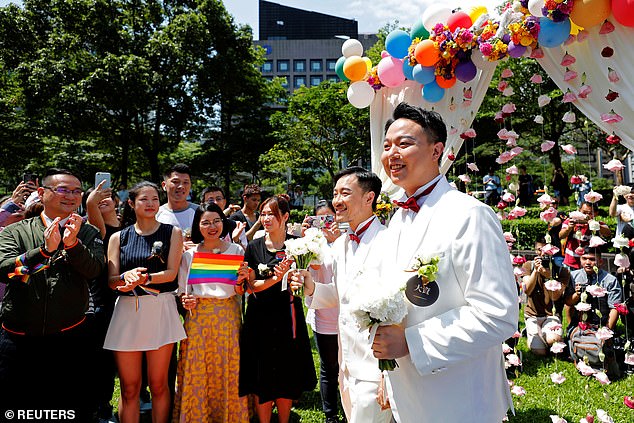 Dozens of couple arrived early to be among the first to register their unions, before attending a party outside afterwards 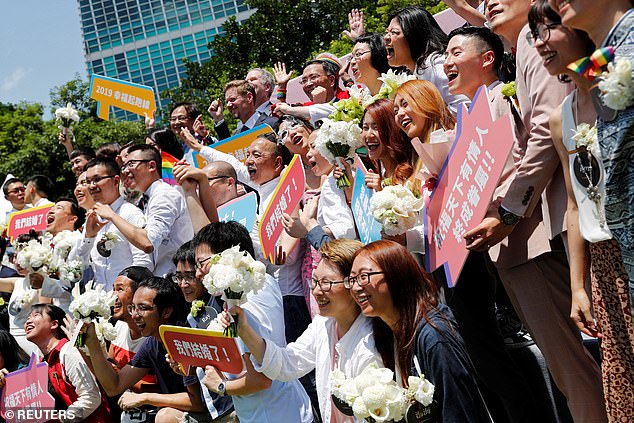 Taiwanese lawmakers were given a two-year deadline to enshrine gay marriage in law after judges ruled it was legal, and that moment came last week ahead of ceremonies today 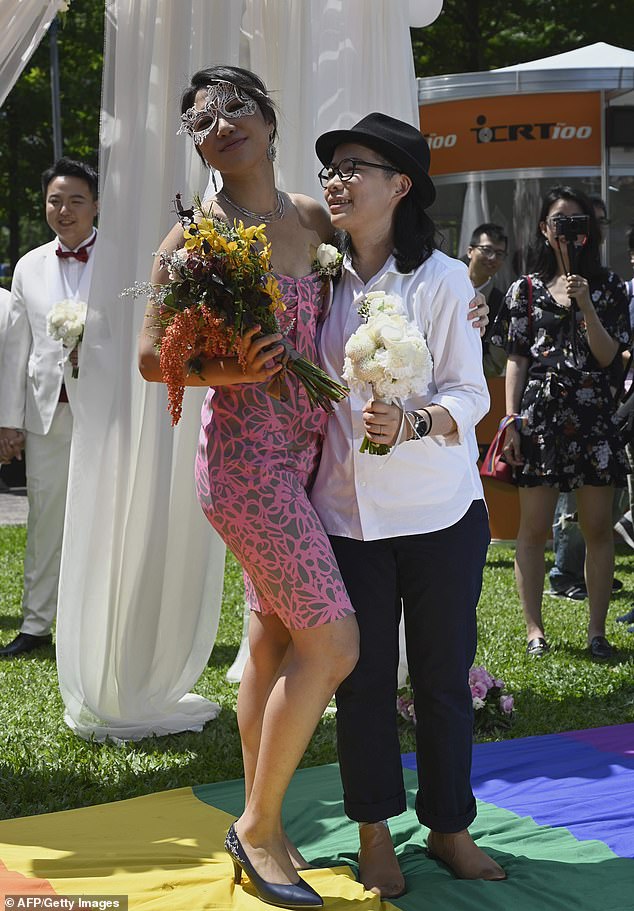 They embraced and kissed in front of the gathered press before proudly holding aloft their wedding certificates as well as new identity cards listing each other as spouses.

Among those tying the knot were social worker Huang Mei-yu and her partner You Ya-ting.

They held a religious blessing conducted by a progressive Buddhist master in 2012 but longed for the same legal rights granted heterosexuals.

‘It’s belated, but I’m still happy we can officially get married in this lifetime,’ Huang told AFP after signing her marriage certificate, clutching a bouquet and beaming.

Legal recognition of their love, she said, was a crucial step and might help others accept their relationship.

‘Now that same-sex marriage is legally recognised, I think my parents might finally feel that it’s real and stop trying to talk me into getting married (to a man),’ she said. 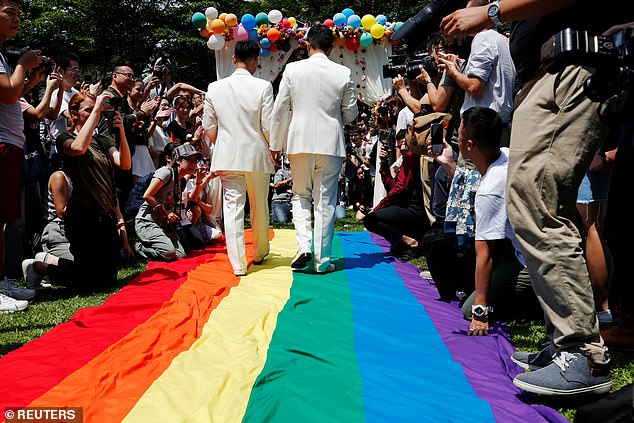 Despite jubilant scenes in Taipei on Friday, the decision has bitterly divided the island nation, with conservative groups vowing to punish the ruling party at next year’s election 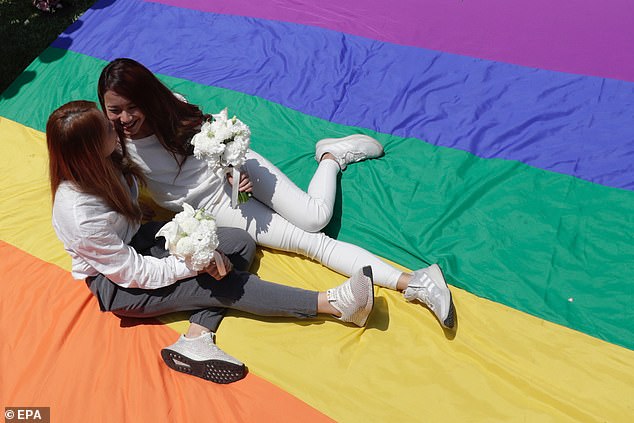 A dozen couples showed up early to register as married in Taipei, but around 300 marriages were expected to take place around the country on Friday 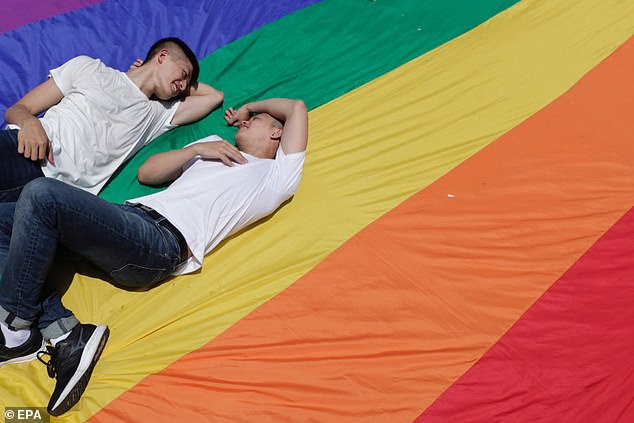 Friday’s weddings mark the culmination of a 30-year fight for equality, even as conservative groups threaten to wind back the progress 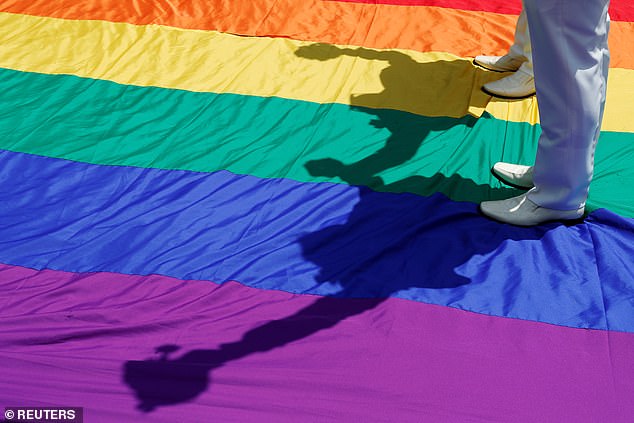 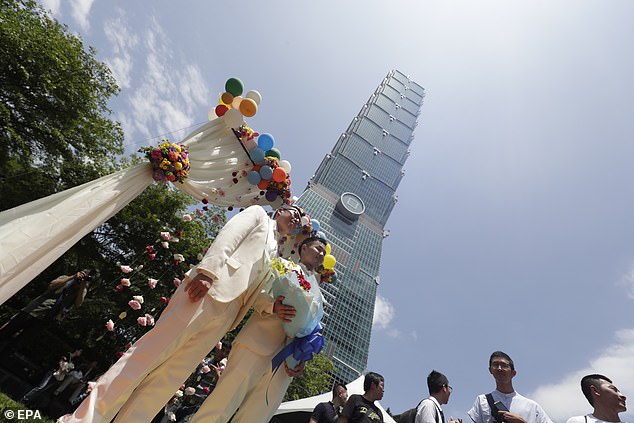 Shane Lin and Marc Yuan, a couple who fell in love at college, were the first to register.

‘It’s not been an easy journey and I’m very lucky to have the support of my other half, my family and friends,’ Lin told reporters through tears.

‘Today I can say in front of so many people that we are gay and we are getting married. I’m really proud that my country is so progressive,’ he added.

Taiwan made history last week when it became the first place to legalise gay marriage in Asia, home to 60 percent of the world’s population.

But the issue has also caused deep divisions on an island that remains staunchly conservative, especially outside of the cities and among the older generation.

Some 300 same-sex couples are expected to register on Friday, according to local authorities, around 150 in the capital Taipei which boasts a thriving and vocal gay community.

The city hall hosted an outdoor wedding party at the foot of the famous Taipei 101 skyscraper with dignitaries from Canada, Spain and Britain giving speeches welcoming Taiwan into the handful of liberal democracies that have legalised same-sex marriage. 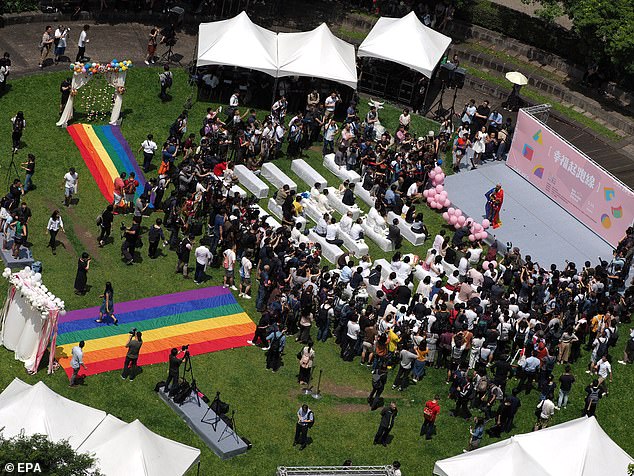 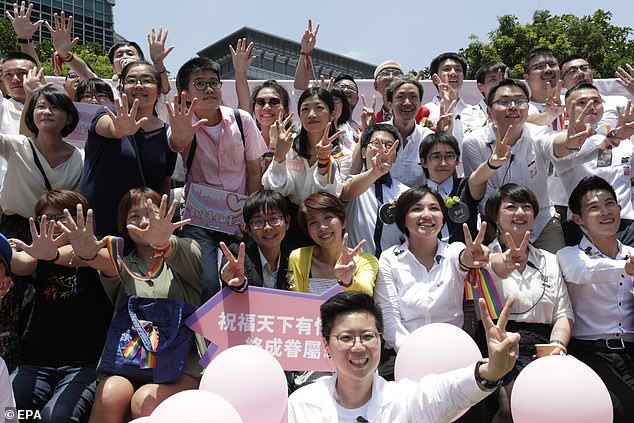 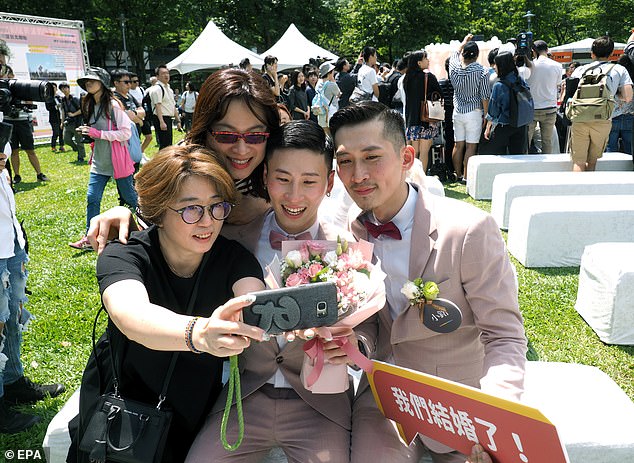 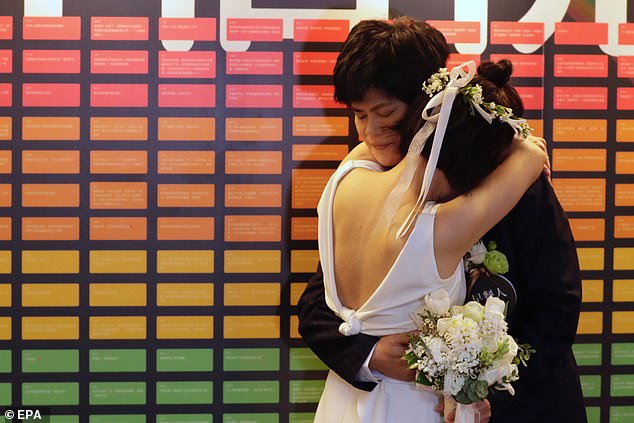 A same-sex marriage couple share a tender embrace in front of a ‘wish wall’, filled with dozens of rainbow cards containing hopes for the future 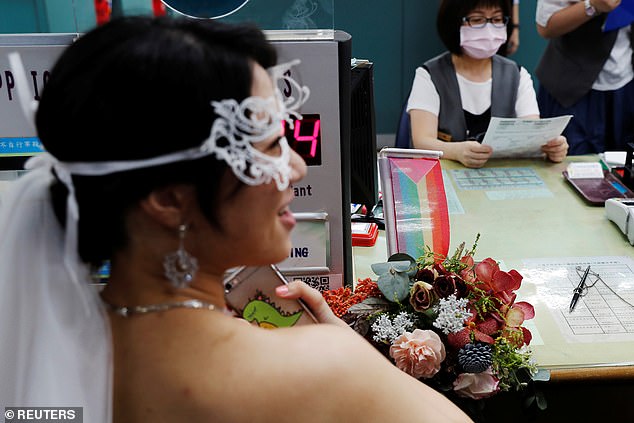 A rainbow flag is seen on a desk at the Household Registration Office as same-sex couples register for marriage, in Shinyi District in Taipei

For veteran gay rights activist Chi Chia-wei – dressed in an eye-catching red suit with a rainbow headband – Friday’s registrations were the culmination of a three-decade fight trying to persuade successive governments to change the law.

It was Chi who eventually petitioned Taiwan’s Constitutional Court leading to a 2017 judgement that denying same-sex couples the right to marry was unconstitutional.

Facing an imminent court deadline, parliament finally passed a bill last Friday allowing same-sex couples to form ‘exclusive permanent unions’ and another clause that would let them apply for a ‘marriage registration’ with government agencies.

‘I feel very happy that same-sex couples can finally register and be listed as each other’s spouse. I am honoured to witness Friday’s marriage registrations,’ he told AFP.

But the issue has polarised society. 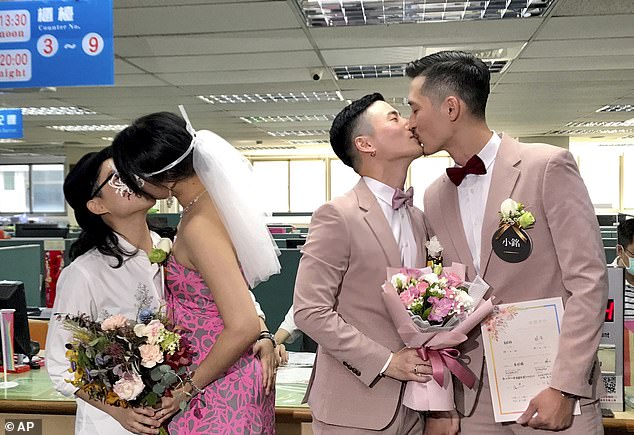 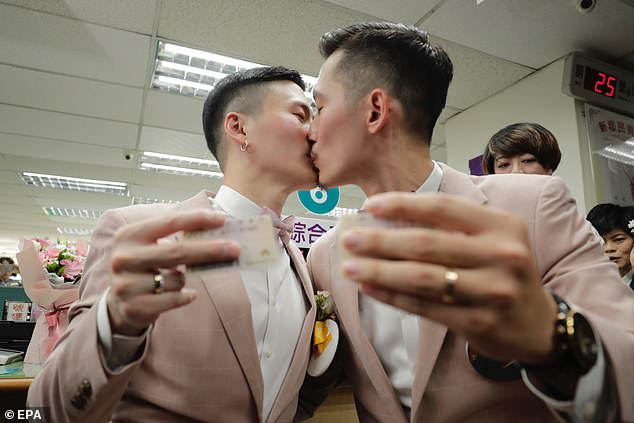 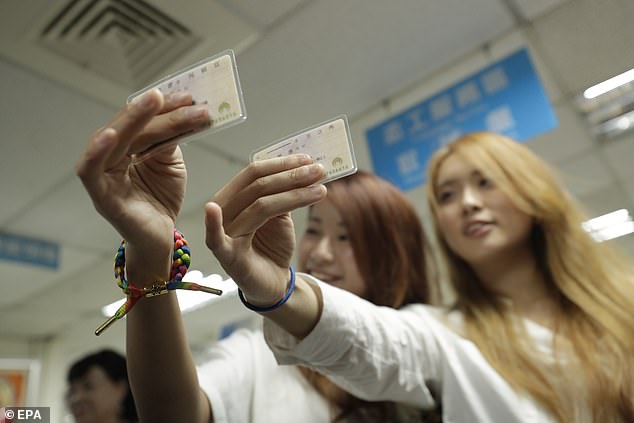 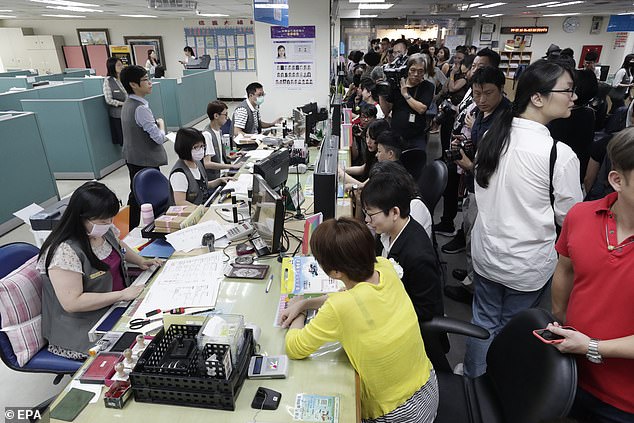 Conservative and religious groups mobilised after the court ruling and comfortably won a series of referendums last November in which voters comprehensively rejected defining marriage as anything other than a union between a man and a woman.

However, the new law still contains restrictions not faced by heterosexual couples.

Same-sex couples can currently only adopt their partners’ biological children and can only wed foreigners from countries where gay marriage is also recognised.

Gay rights groups say they are willing to accept partial equality for now in the hopes of winning later legal battles over issues such as adoption, surrogacy and marrying foreigners.

Opponents have vowed to punish President Tsai Ing-wen and the lawmakers who supported the gay marriage law at January’s elections when Taiwanese will elect both a new president and a new parliament.