The £62bn spoils of war: Taliban militants help themselves to helicopters, hi-tech radios and armoured vehicles amid ramshackle withdrawal of international forces from Afghanistan

When British soldiers deployed to Helmand 15 years ago their Taliban counterparts were shabbily dressed in tattered traditional outfits and armed with decades-old Russian rifles and grenade launchers.

While they possessed guile in spades, and knew every inch of the jungle-like ‘Green Zone’ where battles were fought, they were poorly equipped and poorly trained.

Now, following the ramshackle withdrawal of international forces, the Taliban has been bequeathed a £62billion bounty of military equipment, including hundreds of fixed-wing aircraft and tactical helicopters, tens of thousands of armoured vehicles and hundreds of thousands of weapons.

The transformation in the group’s appearance and capability could scarcely be more vivid or disturbing.

Sandals and shalwar kameez have been replaced by combat boots and tailored camouflage uniforms.

Ancient AK47s are nowhere to be seen. Instead today’s Taliban carry US Green Beret-issue M4 carbines with telescoping stocks.

The Taliban of 15 years ago were seldom if ever seen wearing helmets. But today their headwear is more expensive and more advanced than that worn by most British troops. 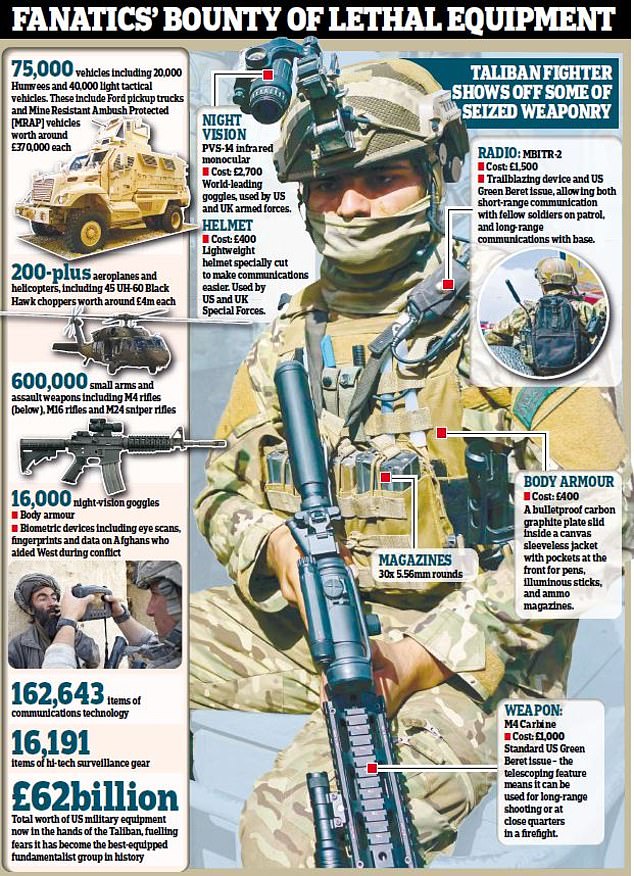 The hundreds of thousands of weapons, vehicles, aircraft and uniforms left behind for the Taliban

The group appears to have helped themselves to the state-of-the-art MBITR-2 (Multi-band Intrateam Radios) favoured by US Green Berets but denied to most conventional UK personnel. They were issued to Afghan government forces.

A UK Army officer said: ‘I’m impressed, yes they have got all the gear but judging by appearances they may have some idea too.

‘The Taliban have got a plan, high morale, proper equipment and they’re winning.’

The militant group’s metamorphosis from rag-tag guerrilla force to highly professional, impressively equipped army has been at the expense of Western taxpayers.

The UK and the US have picked up the tab not only for the eye-wateringly expensive hardware, but also the training budget – as the Taliban’s ranks have been swollen by defectors from the Afghan National Security Forces.

The irony is that the Taliban’s newfound arsenal was supposed to prevent Afghanistan falling into Taliban hands.

US Republican Congressman Jim Banks, who collated the information, revealed that the Taliban now has ‘more Black Hawk helicopters than 85 per cent of the countries in the world’. 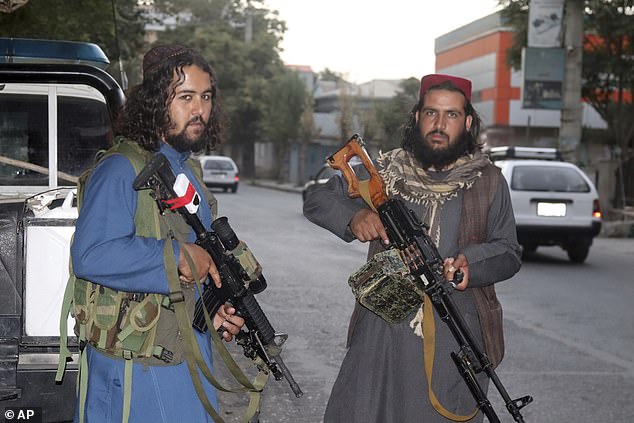 Taliban fighters on patrol in Kabul at the weekend, brandishing huge firearms

Alarmingly the group has also obtained biometric collection and identification devices which could help them identify Afghans who worked for coalition forces, many of whom remain trapped in the country and could be held hostage by the Taliban.

Mr Banks, who served in Afghanistan as an officer in charge of supplying weapons, said: ‘Due to the negligence of this administration, the Taliban now has access to $85billion (£62billion) worth of military equipment.

‘Unbelievably, and unfathomable to me and so many others, the Taliban now has access to biometric devices. This administration still has no plan to get this military equipment or supplies back.’

US National Security Advisor Jake Sullivan admitted he did not have a ‘complete picture’ of how much of the missing military inventory could now be in the hands of the enemy.

UK Defence Secretary Ben Wallace has conceded that some British military equipment may be left behind after troops fly home. But he insisted none of it would be ‘lethal’ or ‘sensitive’.

This equipment, such as a small number of vehicles, would have been flown back to Britain were it not for the need to prioritise the evacuation of thousands of vulnerable Afghans and UK citizens.