An Afghan boy nicknamed ‘Little Messi’ has been forced to flee after the Taliban warned they will ‘cut him to pieces’ if they capture him.

Murtaza Ahmadi moved the world in 2016 with his love for Barcelona great Lionel Messi when pictures emerged of him wearing a blue and white striped plastic bag, with the star’s name on the back.

His dream of meeting the Argentinian came true, but now the seven-year-old is living a nightmare as one of thousands of Afghans displaced by war.

Murtaza and his family abandoned their home in southeastern Ghazni province in November, without the prized football Messi gave the youngster. They are among hundreds of others fleeing intense fighting after the Taliban launched an offensive in the previously safe area.

Now they are among the thousands of similarly uprooted people struggling to get by in Kabul, and also living with the fear that the Taliban are hunting for their famous son. 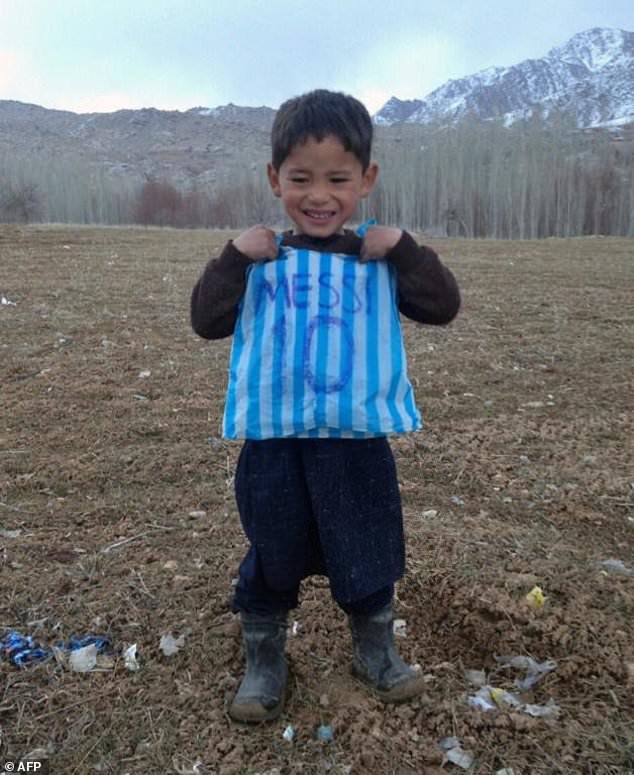 Murtaza Ahmadi moved the world in 2016 with his love for Barcelona great Lionel Messi when pictures (above) emerged of him wearing a blue and white striped plastic bag, with the star’s name on the back 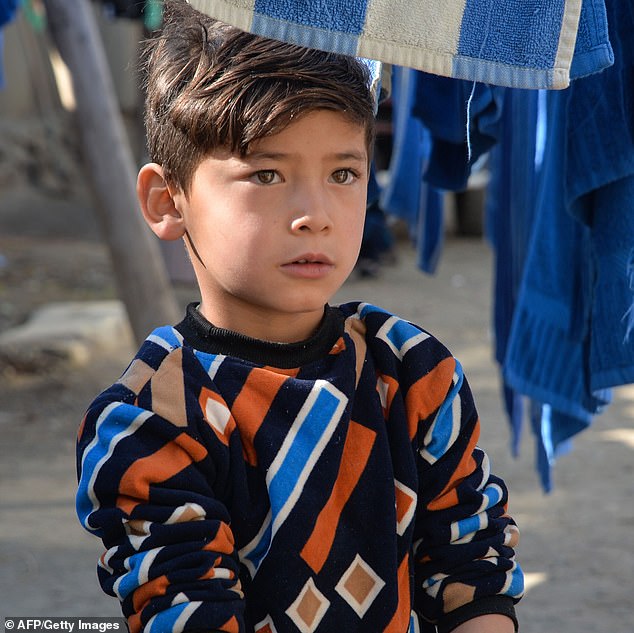 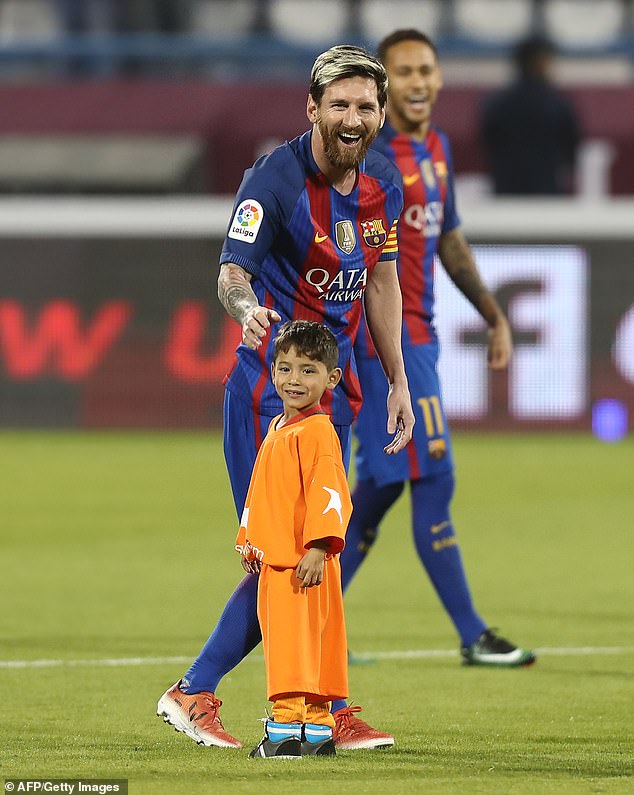 The image of Murtaza sporting a makeshift Messi jersey – made of a blue and white striped plastic bag and with Messi’s name and famous number 10 written carefully on the back in felt-tip pen – flooded media and social networks in 2016.

The media hype drew the football superstar’s attention, and that year Murtaza met his idol in Qatar, where he walked out onto the pitch clutching Messi’s hand as a mascot for a Barcelona friendly.

Messi, a UNICEF goodwill ambassador, also gave his tiny fan an autographed jersey and a football.

But the moment of happiness has quickly dissipated.

AFP met with the family recently in the cramped room in Kabul they are renting from another impoverished family, where Murtaza’s mother Shafiqa told how they had fled their home district of Jaghori in the night after hearing gunshots.

‘We couldn’t take any of our belongings, we left only with our lives,’ she said, her face half hidden by a scarf.

The family belongs to the Shiite-denominated Hazara ethnic group, who were targeted by the Sunni Taliban in their November operation in Ghazni.

The UN says up to 4,000 families fled, with witnesses describing ‘absolute terror’ to AFP. Hundreds of civilians, soldiers, and insurgents were killed in the fighting.

The fear felt by the Ahmadi family was ratcheted up when they learned that the Taliban were searching for the small Murtaza by name.

‘(They) said if they capture him, they will cut him into pieces,’ Shafiqa said, her eyes horrified. 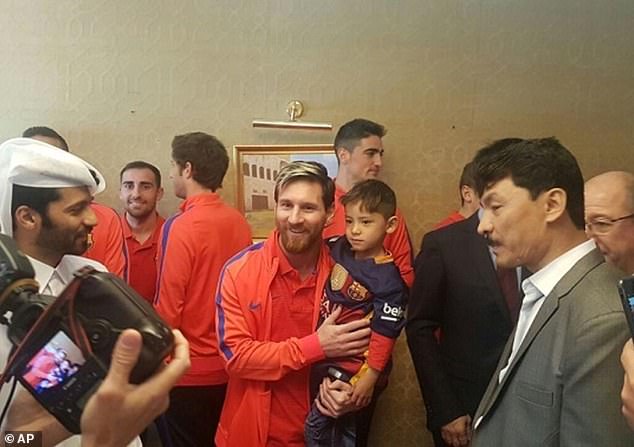 The Barcelona star carried Murtaza Ahmadi, then aged six, in his arms at a specially arranged meeting in Doha, Qatar in December 2016 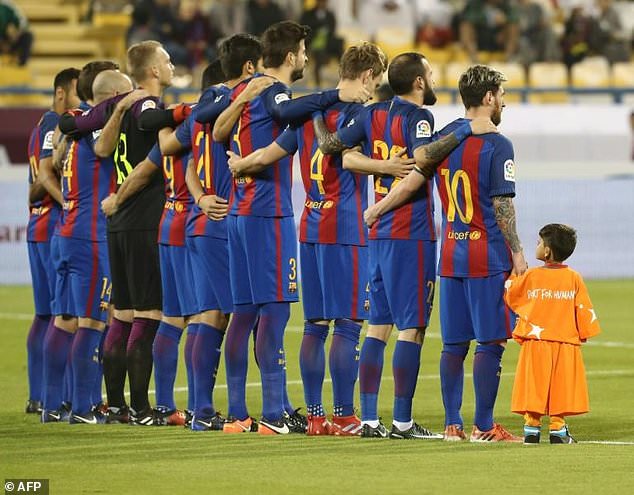 After images of his plastic Messi jersey went viral, Murtaza met his idol in Qatar (pictured) 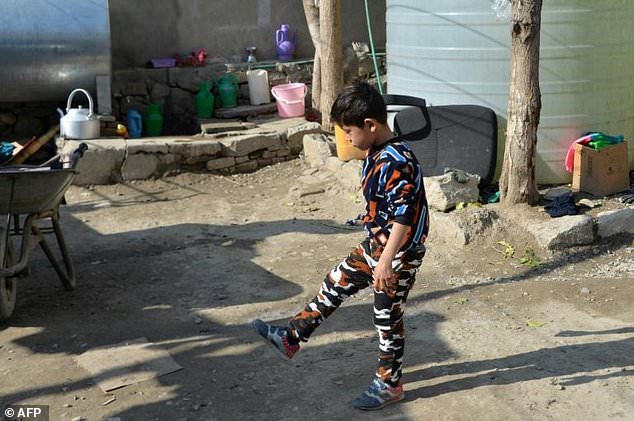 The family lives under precarious conditions, with inadequate shelter, food, water or sanitation available to the refugees

Sports were rarely tolerated under the 1996-2001 Taliban regime, and the Kabul football stadium was a well-known venue for stonings and executions.

Shafiqa said she hid her famous son’s face with a scarf to prevent him from being recognised as they fled.

They took refuge first in a mosque in Bamiyan, before arriving in Kabul six days later. Among their belongings left behind are the football and jersey signed by Messi.

Although Afghan security forces have beaten back the Taliban in Jaghori, the family says it no longer feels safe.

‘The danger of the Taliban coming back is high, going back is not an option,’ Shafiqa said.

The attention they received as a result of Murtaza’s fame has added to their fears, she continued.

‘Local strongmen were calling and saying, ‘You have become rich, pay the money you have received from Messi or we will take your son’,’ she said. 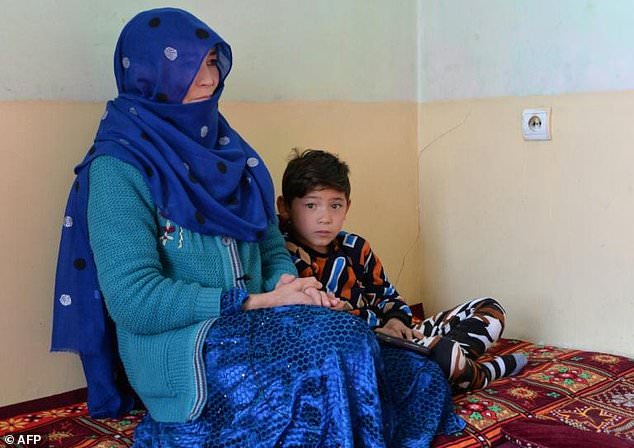 The family are among the thousands of similarly uprooted people struggling to get by in Kabul, and also living with the fear that the Taliban are hunting for their famous son (right)

‘At night we would sometimes see unknown men, watching and checking our house, and then the calls. During the days, we wouldn’t dare let him outside home to play with other children.’

The family have already fled once before, to Pakistan in 2016, where they sought asylum in ‘any safe country’.

They returned reluctantly to Jaghori after their money ran out, Shafiqa said.

Murtaza’s father Arif remains in Jaghori working as a farmer while his family lives in Kabul under precarious conditions, with inadequate shelter, food, water or sanitation available to the refugees.

They are among the more than 300,000 Afghans – 58 percent of whom are under the age of 18 – who have fled their homes due to violence since the beginning of this year alone, according to the most recent tally by the UN’s agency for humanitarian affairs.

Homayoun, Murtaza’s eldest brother who made him his plastic jersey, says that even in Kabul he is afraid. ‘We are worried something bad will happen if they know who Murtaza is,’ he said.

Little Murtaza, meanwhile, says he misses his football and his jersey from Messi.

‘When I meet him, I will say, ‘Salaam’ and ‘How are you?’ Then he will reply saying thank you and be safe, and I will go with him to the pitch where he will play and I will watch him.’