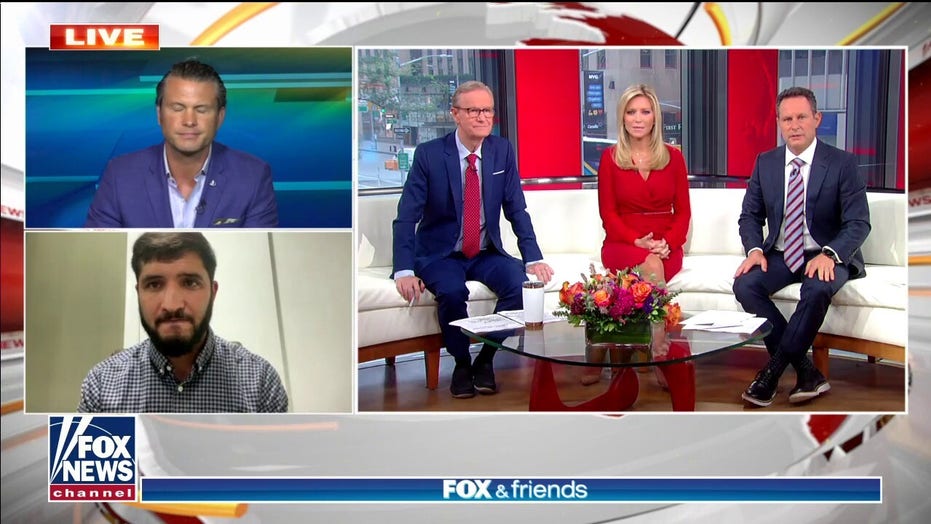 Interpreter on getting family out of Afghanistan: ‘My family is filled with happiness, joy’

The Taliban is warning employed women in Afghanistan to stay indoors until it trains security forces on “how to deal with women.”

“Our security forces are not trained [in] how to deal with women — how to speak to women [for] some of them,” Taliban spokesman Zabihullah Mujahid told reporters at a press conference Tuesday. “Until we have full security in place … we ask women to stay home.”

He added that the guidance is a “very temporary procedure,” and women will be allowed to return to work once a system is in place to protect their safety.

The announcement comes as women in the country fear the Taliban will return to how it ruled from 1996-2001, when women were not allowed to attend school or work, could only leave their homes with the presence of a man and were required to wear head-to-toe coverings.

The Taliban recently said it will respect “women’s rights,” but various reports from the ground show women already being pulled from banking jobs and others working to flee the country out of fear of being killed.

Meanwhile, activist and former Afghan judge Najla Ayoubi added in an interview with Sky News last week that a Taliban fighter allegedly set a woman on fire for “bad cooking,” while other young women are reportedly being forced into sex slavery.

“There are so many young women are being in the past few weeks being shipped into neighboring countries in coffins to be used as sex slaves,” she said.

“They also force families to marry their young daughters to Taliban fighters. I don‘t see where is the promise that they think women should be going to work, when we are seeing all of these atrocities.”

President Biden decided against extending his Aug. 31 deadline of withdrawing U.S. troops from Afghanistan, and is now facing intense pressure to evacuate thousands of U.S citizens and others still in the country.

The Pentagon has said about 4,000 Americans have been evacuated from Afghanistan, with Biden saying the total number of people evacuated since Aug. 14 by U.S officials sits at 70,700. The White House, however, has yet to reveal how many U.S. citizens remain in the country.

“I’ve asked Sec. Blinken to give you an update and a detailed report on exactly how many Americans are still in Afghanistan, how many have gotten out and what our projection is,” Biden said from the White House Tuesday.

The Biden administration has been panned for its Afghanistan policies after the country fell into the Taliban’s grasp earlier this month, with many U.S. leaders calling on the president to extend the withdrawal deadline in order to rescue any Americans and allies.

​​”I can tell you there’s no way we can humanly get all of our American citizens and Afghan partners out of country by that time. I’ve called this consistently an unmitigated disaster of epic proportions. It will be a stain on this presidency, and particularly of the decision made today, and what we heard today. He will have blood on his hands, people are gonna die,” Republican Rep. Michael McCaul said during a press briefing on Tuesday afternoon.