Berlin: Germany's highest financial court has ruled that people go to Berlin's techno clubs primarily to appreciate the music rather than for the clubs' notorious cocktail of alcohol, dancing and anonymous sex.

Federal court judges were convinced that techno and house nights were concerts rather than parties, meaning clubs such as the world-famous Berghain qualify for tax breaks such as those enjoyed by the Berlin Philharmonic. 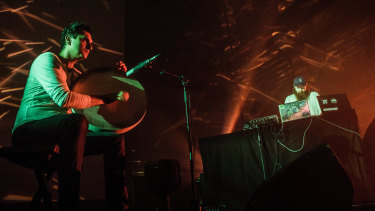 Berlin’s electronic music scene is key to the city’s ability to attract tourists and entrepreneurs.Credit:Berlin Atonal

The case reached the federal court after an unnamed techno club sued the city of Berlin for charging a 19 per cent VAT rate imposed on parties rather than the 7 per cent charged for concerts.

In its ruling, the court noted that a techno night was not all about musical appreciation.

"As well as the stages, there are bars, seating areas and so-called 'dark rooms'," the ruling stated, referring to darkened areas set aside for people to have sexual interactions with strangers. But the judges recognised that "even if it is not possible to watch the music from everywhere, due to the volume it is unquestionably possible to hear it."

The court's detailed deliberation considered aspects such as that DJs are not introduced before they start playing and that people enter the club after a performance has started, both things that speak for the event being a party.

Like techno: the Berlin Philharmonic Orchestra performs in front of Brandenburg Gate during the central event commemorating the fall of the wall in Berlin, Germany in 2014.Credit:AP

On the whole, though, they concluded that techno DJs, through the use of synthesisers and mixing decks, were involved in a creative process that went beyond playing other people's music.

"It involves the creation of new sound sequences and pieces of music which the complainant – this is undisputed – publishes on its record label," it concluded. "The DJs not only play other people's music, they also perform their own new creations, using instruments in the broader sense of the word to create sounds with their own character."

The ruling will come as a relief to a Berlin nightlife scene struggling to cope with rising rents even before the pandemic shut clubs in March.

The city's techno scene flourished in warehouses and cellars in the empty spaces between east and west after the fall of the Berlin Wall in the 1990s.

In the past two decades it has become more professional, with venues such as Berghain attracting DJs, fans and partygoers from across the globe.

The Clubkomission, an umbrella organisation for Berlin's club scene, claims that in normal times the electronic music scene attracts 3 million people to the city annually and contributes €1.5 million to its economy.

Notoriously strict door policies on the biggest clubs, where bouncers let in only a fraction of the hundreds trying to enter, have given them an almost mythical reputation. But many clubs are under threat from the demands for space being placed on the city by its fast-growing population.

Aside from the tax ruling, the Clubkomission is attempting to have techno clubs recognised as cultural venues rather than places of entertainment.

Petitioning the Bundestag in February, it said clubs should have the status of opera houses rather than of casinos and brothels, as is currently the case.

A status as protected cultural entities would put the onus on the owners of nearby homes to soundproof them while making it harder for landlords to evict clubs from their premises.