Poppy Leigh, 13, fashioned her hair into a Christmas tree complete with fairy lights

A teenager who fashioned her hair into a Christmas tree complete with fairy lights was told to take it out or be sent home from school.

Poppy Leigh, 13, was met with a less-than-festive response after turning up to lessons with the seasonal hairdo in Wythenshawe, south Manchester.

The Year 8 student wrapped her hair around an empty Volvic water bottle to achieve the unusual look and added fairy lights for an extra festive feel.

But when she arrived at Manchester Health Academy this morning, she was told it wasn’t appropriate for school.

Poppy’s mother, Christie Leigh, claims her daughter was told to put her hair down, or go home.

The mother-of-three said: ‘I am quite upset really, it’s just Bah Humbug. It’s just a bit of fun and Christmas cheer before she breaks up tomorrow.

‘She just wanted to make things a bit more exciting. Poppy is always messing around with her hair. She walked in this morning and said: “Mum, can I do my hair like this for school? It looks like a Christmas tree”.

‘She wrapped her hair around an empty bottle of Volvic water and then she asked me to put the lights in for her.’

Despite the apparent negativity from the school, Ms Leigh said one of her teachers told Poppy the festive up-do looked ‘fantastic’.

‘One of the teachers said her hair looked fantastic, but she was told to take it out or go home’, she said.

The teenager (left and right) was met with a less-than-festive response after turning up to lessons with the seasonal hairdo in Wythenshawe, south Manchester 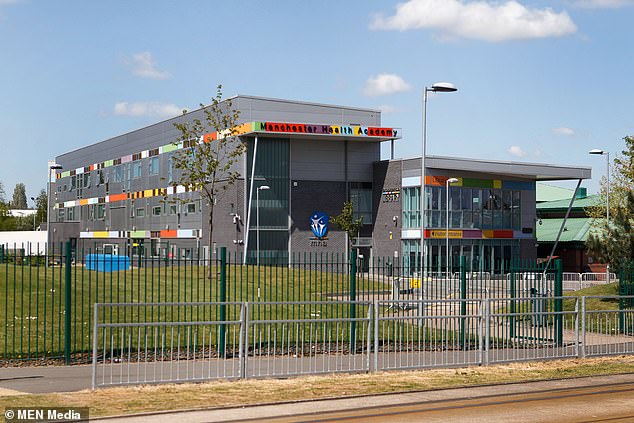 Kevin Green, the principal of Manchester Health Academy (pictured), denied the school had sent a student home, but insisted the hairstyle was ‘inappropriate’

‘Poppy wouldn’t come home because she loves school and is one of the top students, so she had to take it out.’

Kevin Green, the principal of Manchester Health Academy, denied the school had sent a student home, but insisted the hairstyle was ‘inappropriate’.

‘The Academy has the highest of expectations around uniform and teaching and learning, and all through this week, staff and students have remained focused on learning’, he said.

‘Friday is a day where there will be a series of Christmas assemblies and a time for students to reflect with friends and staff about the Christmas period.

‘At no point did the Academy send a student home. The child concerned is a wonderful student and, whilst it was a remarkably creative hairstyle, it was, unfortunately, inappropriate for school.’