Melbourne City Council is picking up almost five times as much rubbish from its parks as it normally would as Melburnians rely on green space to see friends and family during COVID-19.

Before the pandemic, City of Melbourne crews would usually remove two tonnes of waste from council parks on a busy weekend. 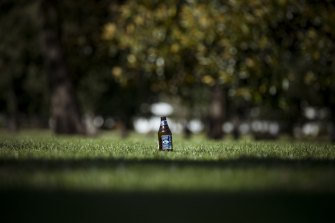 That has increased in the past three months to between eight and 10 tonnes of waste every weekend.

The council has contracted an extra six staff to pick up waste and clean toilets and another 128 bins and 18 portaloos have been rolled out in Kings Domain, Carlton Gardens, Fawkner Park, Fitzroy Gardens and Princes Park. 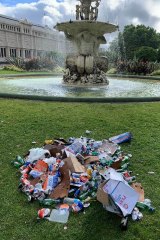 "While we are thrilled that so many people are enjoying our parks and gardens for their Christmas catch-ups and parties, we really need everyone to work with us on keeping our green spaces clean and safe," lord mayor Sally Capp said.

"No one wants to see rubbish lying around in our beautiful world-renowned green spaces."

Picnickers were surprised at how empty Fawkner Park in South Yarra was on Sunday, when the city hit 30 degrees, after months of parks being like a "festival".

"I thought there’d be more people here," said Hannah Stewart, who was having a picnic with a group of work friends to celebrate the end of the year.

"As soon as restrictions moved, I'd never seen a park so busy."

Amanda Cupitt said that in the early days after stage four lockdown a trip to the park "was like being at a music festival with no music". 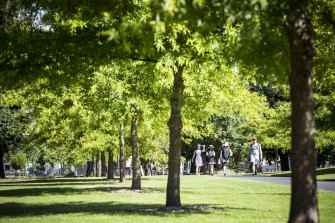 Melburnians have relied on parks in recent months while groups of people were banned from visiting pubs or homes.Credit:Chris Hopkins

Most people agreed they had visited parks more than usual during the pandemic, but said their dependence had cooled down now that groups can visit homes and bars.

Stephanie Stockman said the council had kept up with the sudden demand on green space, although she said there were times she had to queue for public toilets which were not particularly clean.

"I think they did a pretty good job. Toilet facilities are not used to that inundation, so I'll forgive them for that."

Another group said it was more relaxing at the park now that crowds have dissipated.

"It was really bad when it was the only place you could go. But now people have some choice," said Tim, who did not want his surname published.

Sunday was the first day that Lil had seen Fawkner Park without crowds.

"When I was walking here I was like, 'why is nobody around?'" she said.

City of Melbourne said park rangers had been noticing more marquees, which require a permit because they can be dangerous if they aren't properly secured.

Slacklines attached to trees are discouraged and portable generators can only be used with a permit. Portable gas barbecues are permitted in parks but must be raised off the grass and be fitted with a drip tray.

Anna MacKenzie and Hayden Dobson were having lunch and some ciders at the park on Sunday said they had relied on the park a lot during tough COVID-19 restrictions.

"During COVID, it was completely packed," Ms MacKenzie said.

"I kind of feel like now stuff is open – restaurants and activities – I'm not coming to the park as much.

"It's still nice for a Sunday afternoon to chill out." 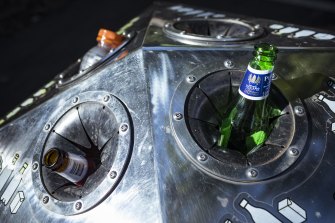 City of Melbourne is removing between eight and 10 tonnes of rubbish from its parks every weekend.Credit:Chris Hopkins

Carlton Gardens was a little busier than Fawkner Park on Sunday, but was nothing like it’s been in recent months.

The city's garbage problem comes as the City of Yarra considers a temporary ban on alcohol at Edinburgh Gardens in Fitzroy North.

Councillors will debate how to respond to increase patronage at the park at a meeting on Tuesday, after neighbours complained of noise, rubbish, drug use and faeces in the streets.

As many as 4000 people have packed the park on sunny days over the past few months.

Yarra Council has doubled the amount it spends on maintaining toilet facilities for the summer period to $100,000. Cleaning is costing $8000 a week and $6000 worth of signs have been added to the park.