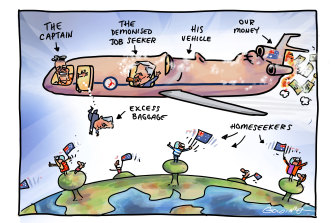 To submit a letter to The Age, email [email protected] Please include your home address and telephone number.

Jon Faine’s excoriating assessment that the Australian Defence Force and Victoria Police have ‘‘engaged in appalling and ultimately futile attempts’’ to cover up the mess they’ve made – by failing to act with utmost integrity as they go about their work to ‘‘serve’’ and ‘‘protect’’ the people of Australia and Afghanistan – is apt (‘‘The sad common element linking Bourke Street and a faraway war’’, The Sunday Age, 22/11).

It’s ‘‘no wonder’’ Faine draws the parallel between the ADF and Victoria Police as ‘‘exchanging tactical notes’’ from the ‘‘same play book’’. They’re both hyper-masculine, toxic, ‘‘group think’’ work environments with seemingly poor leadership that turned a blind eye for too long.

Importantly, given the scale and gravity of these alleged offences, Australia must invest in anti-corruption bodies (as suggested by Faine) that are properly resourced and independent, to hold all power holders to account where there is an abuse of power and to stymie the flagrant misuse of public monies to preserve individual reputations.

Australia owes that to the brave whistleblowers who have been ‘‘monstered by Federal Police’’ and who have gone out on a (precarious) limb in the public interest.
Jelena Rosic, Mornington

The climate change denialism promoted vigorously by Tony Abbott when he was prime minister has, as his critics foretold, led this nation into a dangerous cul-de-sac. Europe, led by Angela Merkel’s Germany, has in recent years forged ahead with wind farms and solar energy plants as a staple across regions like Bavaria. Norway surges ahead with electrified cars and France and conservative-ruled Great Britain are leading the war against carbon emissions.

Negative reinforcement
I wonder if Mathias Cormann’s carbon footprint, instead of enhancing his chances, will prove the stumbling block to his coveted role at the helm of the OECD?

Jetting around Europe only reinforces Australia’s poor record on climate action, which is hard to repair with rhetoric.
Cate Lewis, Clifton Hill

Perhaps they do know
Michael O’Brien may believe that if people ‘‘understood what the Liberal Party stood for’’ (‘‘Youth the key to Coalition ‘turn around’, says O’Brien, The Age, 28/11) they would never lose an election.

Perhaps the problem is that, since the advent of Jeff Kennett, Tony Abbott, et al, people understand only too well what the Liberal Party stands for.
Leonie Millar, Ripponlea

Hammer it home
If everyone from the NSW Premier to a SA pizza-shop employee fails to understand when isolation is required and can’t follow simple rules, what hope is there for the average quarantine security guard, let alone members of the general public?

The message must get through. It’s clearly time for grass-roots education in basic common sense, or else we’ll all be back to square one.
Jenifer Nicholls, Armadale

Discordant impression
While as Australians we should all applaud the quiet diplomacy that has led to the release of Melbourne academic Kylie Gilbert-Moore from the harsh conditions of an Iranian jail after 804 days’ imprisonment, Scott Morrison’s enthusiastic public basking in her recent freedom, and his deliberations about human rights, unfortunately, evoke a distinctly discordant impression.

This is the man who, beginning as immigration minister in the Abbott government, has been centrally implicated in the long-term detention of boat-arriving asylum seekers, some detained for more than eight years now, and some of whom had originally fled the Iranian regime.

This is the man who has overseen the punitive isolation of one Sri Lankan family on Christmas Island, for more than a year and continuing, after they had successfully integrated into a Queensland regional community, and this is the man who, when social services minister, oversaw the creation of the government’s appalling robo-debt scandal that falsely charged thousands of very vulnerable Australians receiving pensions or unemployment benefits, needlessly generating great distress among many of these citizens.
Michael Faulkner, Toora

Hard work ahead
Euphoria set in on Friday as we were officially declared to be COVID-19 free. Self-congratulations ranged across the community. We achieved together, through sacrifice, a rare victory in the world.

We deserve to party, have a holiday, enjoy friends and relatives, to see each other full-face without masks. But soon we should put in context what is known as post-disaster euphoria, a result of shared survival, common across bushfires, earthquakes and end of wars.

We should prepare for the next long phase of reconstruction. This includes recognition of what has been destroyed and lost: people, health, and family and economic infrastructures. Grieving them and replacement with new equilibriums, even if sometimes better than pre-disaster ones, is difficult and frustrating.

This is when pent-up suffering and exposed fault lines manifest in increased mental health issues, psychosomatic illness and social tensions.

Understanding and being prepared for this phase can ameliorate its noxious effects.
Paul Valent, South Yarra.

The west has helped
Your correspondent (Letters, 27/11) may not ‘‘give a rat’s’’ about Western Australia. It’s probably fortunate for the nation, however, that the impact of WA’s continuing economic activity during Victoria’s lengthy close-down has substantially lessened Australia’s pain from COVID-19.

We might have hoped that a global pandemic was enough to dampen petty interstate sniping. In some quarters, apparently not.
Rob Brown, North Coogee, WA

Note from the Editor

The Age’s editor, Gay Alcorn, writes an exclusive newsletter for subscribers on the week’s most important stories and issues. Sign up here to receive it every Friday.