The end of WFH? Rush-hour in UK is now BUSIER than pre-Covid levels with Tube rides up 20% on last month – as mothballed Waterloo & City line reopens due to demand

Weekday road traffic has exceeded pre-Covid levels for the first time, according to new official figures, while London Underground rides are up 20% of last month as the mothballed Waterloo & City line reopened today.

The number of vehicles on Britain’s roads on May 28 was at 104% of the figure before the virus crisis began, according to Department for Transport data.

The rise in vehicle use on that date was driven by it being the Friday before a bank holiday weekend, but traffic for the previous four days still averaged 96% of pre-pandemic levels, while weekend road traffic has been at or near 100% since mid April.

The Waterloo & City line reopened today, ahead of schedule on June 21, after its drivers were drafted onto the busier Central Line during the pandemic. This comes after a surge in demand, with ridership on the Tube having increased by more than 20% since May 17.

Mobility data from Apple also shows that on June 5 London was above pre-pandemic levels across driving, walking and public transport. 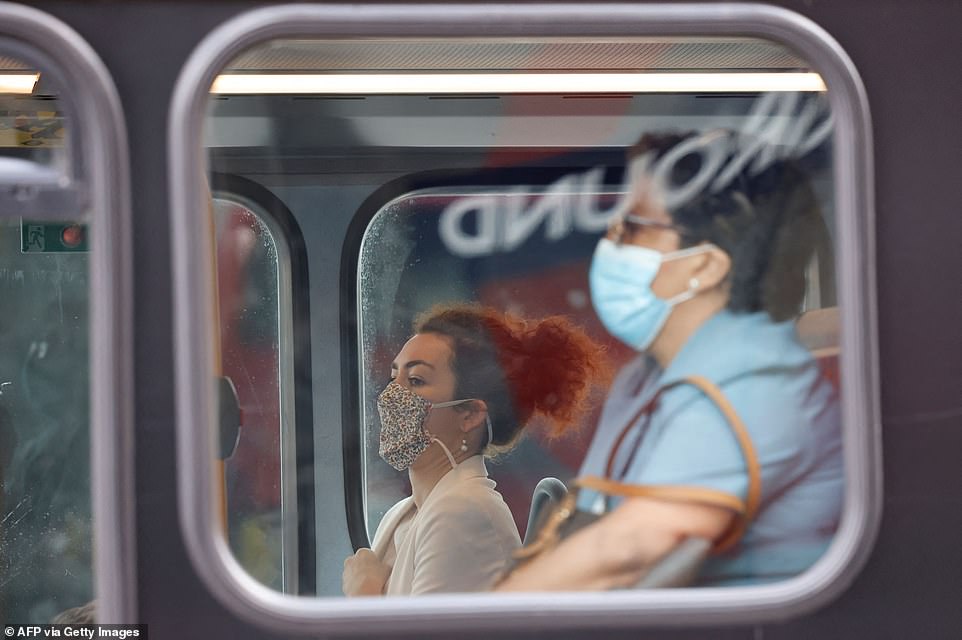 The number of vehicles on Britain’s roads on May 28 was at 104% of the figure before the virus crisis began, according to Department for Transport data. Bus travel has also increased (pictured are commuters in London today) 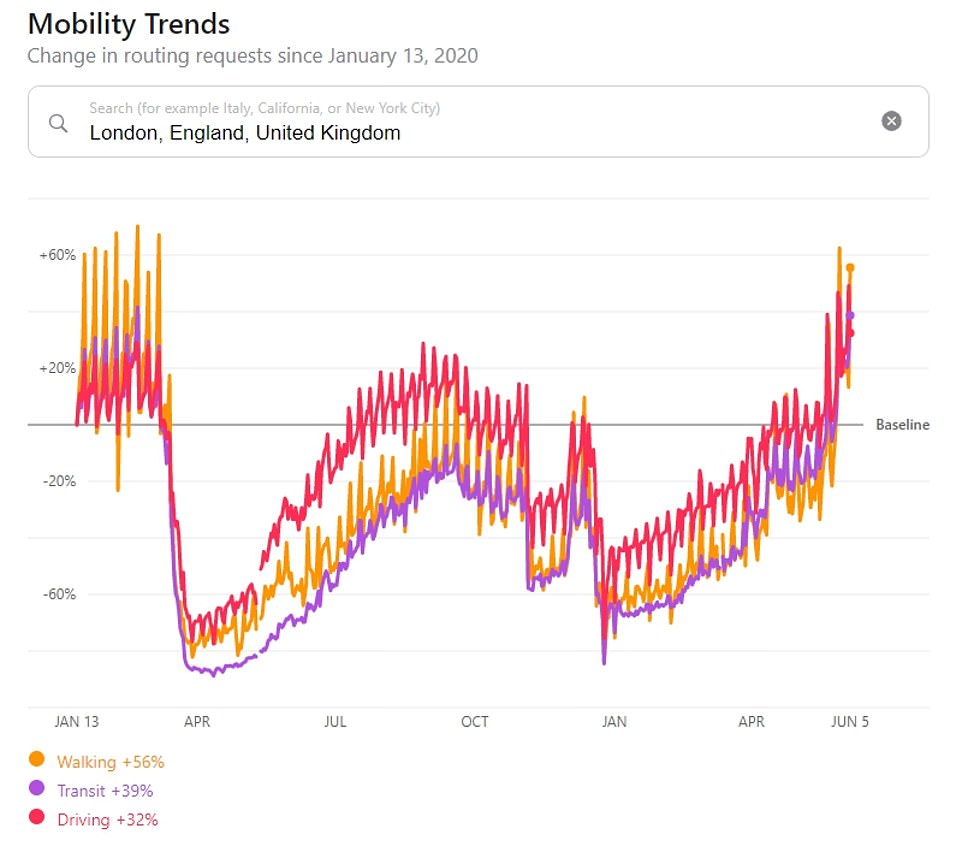 Mobility data from Apple shows that on June 5 London was above pre-pandemic levels across driving, walking and public transport

The Waterloo & City line will reopen today for the first time since the start of the pandemic, Transport for London (TfL) has announced.

The important London commuter link, which connects Waterloo and Bank stations in the centre of the capital, closed in March 2020.

Services will now run every five minutes Monday to Friday from 6am to 10am and 3.30pm to 7pm.

TfL said the operating hours will enable customers to stagger their journeys during rush hour and provide extra capacity for people who have to travel at peak times.

The line had been due to reopen on June 21 this year.

Mayor of London Sadiq Khan said: ‘I’m delighted that the Waterloo & City line is returning from today, ahead of schedule.

‘As London’s economy continues to reopen and more people return to the offices, having this key artery connecting Waterloo and Bank stations up and running will be vital.’

During the pandemic, Waterloo & City line Tube drivers were drafted onto the Central Line to help manage the extra services required to ensure social distancing was maintained.

TfL said the number of people using the Tube had increased by more than 20% since May 17.

Catherine McGuinness, policy chairwoman at the City of London Corporation, said: ‘Today’s reopening of the historic Waterloo & City line is an exciting and vital moment in the Square Mile’s recovery as it marks a huge step on our journey back to normality.

‘The Waterloo & City line will support the return of the City’s commuting workforce back to the Square Mile as the easing of restrictions allows.

‘The additional footfall generated will also provide reassurance to the many businesses that rely on commuter traffic for trade.’

TfL said there will be occasions when social distancing is not possible as more people return to using the network, and advised people to consider waiting for the next service when necessary.

Face coverings must still be worn across the transport network.

Steve Gooding, director of the RAC Foundation, said: ‘Despite the seemingly inexorable rise of forecourt fuel prices over the last year, the arrival of good weather and the prospect of getting out and about over the bank holiday weekend saw road traffic levels back up to pre-pandemic levels.

‘Whether traffic will continue to grow as the remaining lockdown measures are lifted remains to be seen.

‘That growth could create a big challenge for highway bosses if it comes back stronger than ever in the morning and evening peaks despite the apparent popularity of home-working.

‘Official data shows that pump prices of both petrol and diesel have risen for the 28th week in a row, with the per litre price of petrol now 22% higher than a year ago.’

Major firms including Google and KPMG last week revealed their post-pandemic plans to let staff work from home – as firms consider how much time staff should spend in the office as normality returns.

Accounting firm KPMG told its 16,000 UK staff on Wednesday that they will work in the office for up to four days in a fortnight starting next month under a hybrid working model drawn up following the recent decline in British Covid cases.

And U.S. tech giant Google revealed plans to allow 20 per cent of its 140,000 employees to permanently work from home starting September 1.

The company had originally plan to have all of its employees return to work at its offices at least three times a week.

A spokesperson for Google said that starting in September, the company will also transition to a ‘hybrid model’ with a majority of employees required in the office for at least three days per week.

According to an email circulated by CEO Sundar Pichai, around 60 per cent of Google employees are expected in the office each week while another 20 per cent will be assigned to new office locations.

The remaining 20 per cent will be permitted to work from home full-time.

‘Before the pandemic, we had thousands of people working in locations separate from their core teams,’ Pichai wrote to his work force of more than 140,000 employees on Wednesday.

‘I fully expect those numbers to increase in the coming months as we develop more remote roles, including fully all-remote sub teams.’

Pichai wrote that the company will offer more details next month on how employees who are interested in requesting to work from home on a permanent basis can request to do so.

KPMG spokeswoman Zoe Sheppard said in an emailed statement: ‘As part of the firm’s new hybrid way of working, from June onwards, the expectation will be that KPMG’s people spend up to four days in the office spread over a fortnight, with the rest spent at home or at client sites.’ 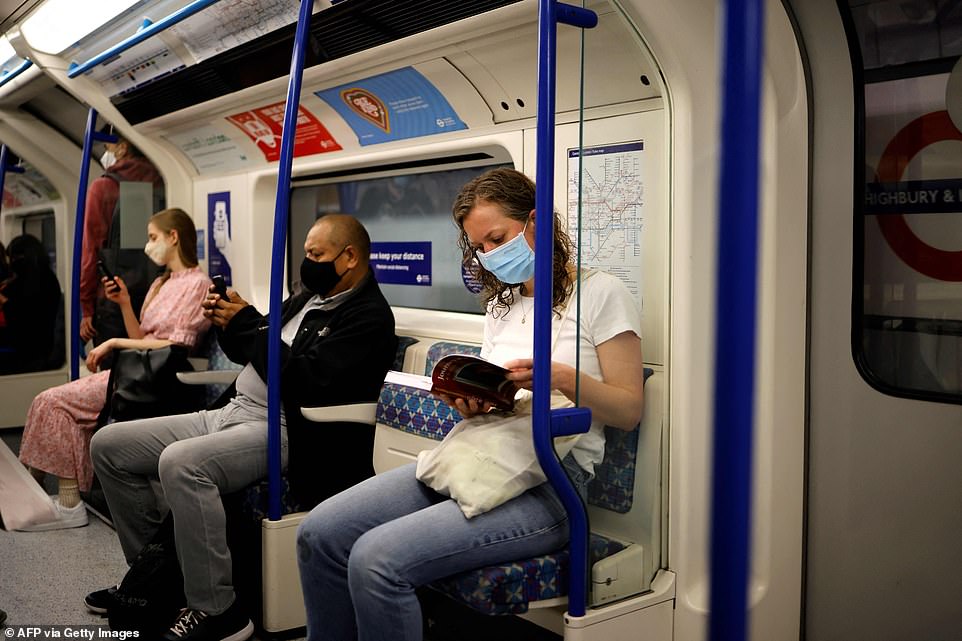 It comes amid reports that the government could instruct millions of Britons could be told to continue working from home past June 21 as the price for lifting the rest of the lockdown.

Ministers are thought to be examining keeping the guidance for people to avoid unnecessary trips to offices and other workplaces to offset the spread of the Indian variant.

They hope that this mitigation will allow the rest of the lockdown rules due to be lifted in little over a fortnight as planned, despite fears that hospitalisations and deaths could increase.

Communities Secretary Robert Jenrick did not deny the claims reported in the Telegraph.

He told BBC Radio 4’s Today programme last week: ‘There are options that are clearly available to the government.

‘We set out with the roadmap what would be expected to happen at the next stage and we want to try to stick to that if we possibly can, all of us are moving everything we can to achieve that.

‘But of course we keep these things under review and we are also asking people to continue to exercise caution in their daily lives.

‘What can we do as citizens? Follow the rules as far as we can. If we don’t need to go into the office then obviously don’t do unnecessary trips in. And above all go out and get vaccinated.’ 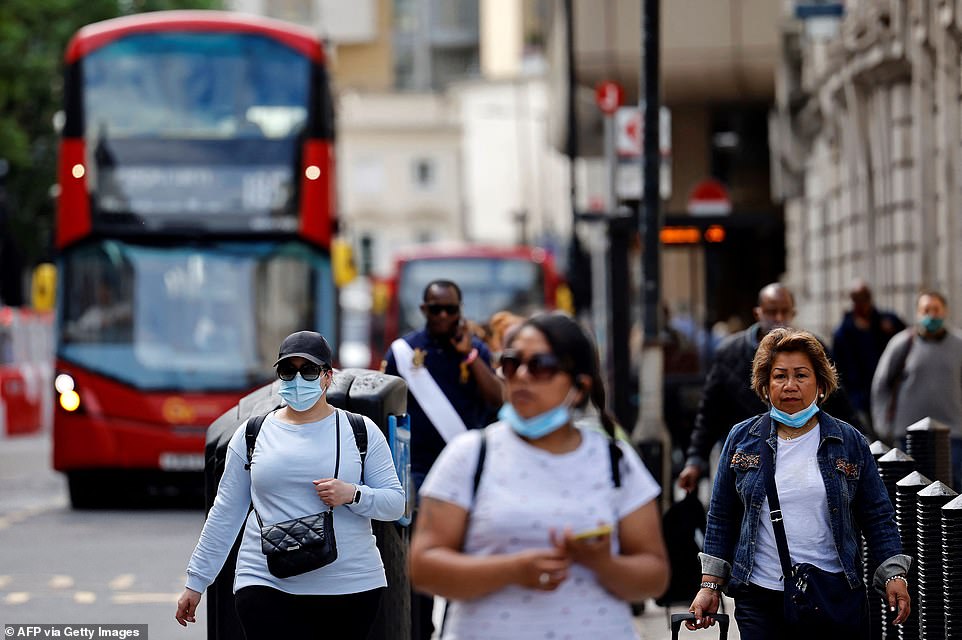 A new poll by flexible workplace provider Orega has suggested half of workers could go into the office just three days a week after lockdown.

Yet working from home could lead to Britons losing out on career opportunities and create discrimination in offices, according to a recent study.

So-called ‘hybrid working’ models which give staff the flexibility to work between home and the office could be ‘dragging businesses back decades’, according to a team of business psychologists at the Cambridgeshire-based firm, OE Cam.

Researchers claim people working from home are missing out on opportunities given to their colleagues in the office, and are less likely to be given a promotion.

The study also suggests that those working remotely, such as parents, disabled and minority groups, will be put at a disadvantage because they are left ‘unnoticed, without a voice or the ability to contribute or progress.’

A raft of top City firms and banks have already embraced a hybrid model or full-time home working as pandemic habits become more commonplace, even as the crisis subsides.