Washington: Vice President Mike Pence was in hiding from a violent mob of Trump supporters in the Capitol on Wednesday when the presidential tweet attacking him posted.

"Mike Pence didn't have the courage to do what should have been done to protect our Country and our Constitution, giving States a chance to certify a corrected set of facts, not the fraudulent or inaccurate ones which they were asked to previously certify. USA demands the truth!" President Donald Trump wrote at 2.24pm.

Trump never called him that day or in the days following to make sure Pence was ok – or to discuss a governmental response to the deadly riots the president incited. 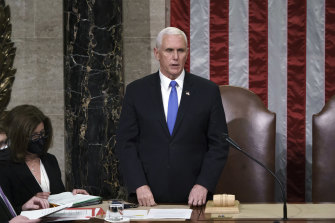 Vice-President Mike Pence reads the final certification of Electoral College votes on the night of the riots. Credit:AP

The remarkable break between the two men – played out over a tense few days as the country convulsed from a riot spurred on by the president – is a startling capstone to a relationship long defined by Pence's loyalty and subservience. The Vice-President who once spent hours a day with Trump, defended some of his most incendiary comments and was careful to not speak ill of him, even to his own closest advisers, now is largely estranged from him.

Pence has committed to attending the inauguration of President-elect Joe Biden and Vice President-elect Kamala Harris, even though Trump is not going. The Vice-President has begun telling staffers goodbye, posing for pictures and having sentimental moments with key aides in his Executive Office suite.

A senior administration official said Trump and Pence finally met in the Oval Office on Monday night, local time, and "had a good conversation, discussing the week ahead and reflecting on the last four years of the administration's work and accomplishments". Pence is under pressure from Democrats to invoke the 25th Amendment, a process to remove the President from office, but he is not expected to do so, aides said. 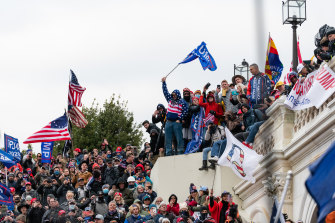 Some of the rioters swarming the Capitol chanted “hang Mike Pence”. Credit:Bloomberg

Pence now faces opprobrium from Trump's supporters, including some who chanted for his hanging during Wednesday's siege and yelled in the Capitol, "Where's Mike Pence?"

"He has no future in the Republican Party," Stevens said. "When the base of the party is not booing you, but chanting hang you, that's a bad sign."

For Pence, it is an uncomfortable and unfamiliar position. One former senior administration official said Pence had previously described his job as doing most anything Trump had asked him to do.

"The President could say, 'Mike I want you to go fly to Asia,' and he would do it, or 'Mike, I want you take over the coronavirus task force,' and he would do it, never questioned a thing," said a former senior administration official, who like some others spoke on the condition of anonymity to speak candidly. "Pence would spend hours in the Oval. Pence would come in, he'd get his daily brief and then he'd get word of when the President would be coming into the Oval and then he'd go over there and they'd spend hours together. For them to not speak anymore is a paradigm I just never would have imagined."

The rupture began on December 15, when Trump decided erroneously that Pence was his last resort to block his election loss. The President began telling others to pressure his Vice-President to object to the final counting of electoral college results by Congress, and the topic came up regularly in conversation between Trump and Pence, officials said.

Those putting pressure included lawyers Rudy Giuliani and John Eastman, trade adviser Peter Navarro and conspiracy-minded Trump ally Sidney Powell, officials said, along with other lawyers and outside advisers sent by Chief-of-Staff Mark Meadows. Trump told "almost anyone who called to tell him he could still win to call Pence," one senior administration official said. Pence at times was in the Oval Office when Trump called people to try to convince the Vice-President, an official said.

Pence was subjected to repeated phone calls from Trump, including one as late as last Wednesday morning – and to implicit threats from the President that he would attack him if he did not object to Biden's victory, officials said.

"Do the courageous thing, Mike," Trump said in one meeting, according to a person present.

"It will be bad for you and for the country if you don't," Trump said at another time, according to an official describing the meeting.

"There was never any sort of convincing case that the President or any of the lawyers around him made," a senior administration official said. Pence tried to be respectful and listen to everyone but told his team to conduct an independent analysis of the laws.

Senators regularly told the Vice-President that they did not have evidence to support the President's claims and that they wanted to be supportive, but they needed evidence, a Pence adviser said. Pence told them he'd pass along the messages, but the White House never provided evidence to many of the senators, the adviser said.

The day before the certification, Trump was extremely angry, a person present in the Oval Office said, venting at Pence, White House counsel Pat Cipollone and others as Pence told him he was planning to certify the results.

Pence met with Trump multiple times before Wednesday to talk him through the dynamic and explain why he could not do what Trump wanted, advisers said. After Wednesday's final pitch did not go well, Trump gave a fiery, falsehood-laden speech, in which he repeatedly pressured Pence to a bloodthirsty crowd.

Soon, the mob descended, and Trump verbally attacked the Vice-President. 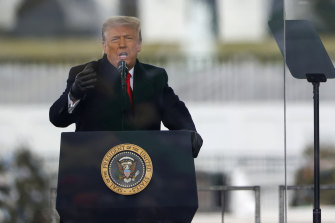 Pence declined to leave the Capitol after protesters breached the compound, even though his security detail on three occasions suggested it would be a good idea to do so, a senior administration official said. Senate Majority Leader Mitch McConnell and others left. While Trump was watching TV and resisting entreaties to tell the mob to go home, Pence repeatedly called military officials and others in the government to expedite the National Guard's deployment. He talked with McConnell about reinstating the certification vote that evening and met with Capitol Police officials, even as Trump and lawyers continued to call others to try to slow the certification. Neither Trump nor anyone in the White House checked on Pence.

Pence skipped his speech to the Republican National Committee meeting, scheduled for the next day, and did not come to the White House. He returned on Friday.

Pence's aides say he needs to make money in the private sector and may write a book. He is keeping his options open for a potential 2024 Presidential bid, an adviser said, and feels at peace with what he did.

"Pence withstood enormous public and private pressure at an historic moment. He followed the Constitution, upheld the rule of law and treated people on all sides with civility," said Tim Phillips, who leads Americans for Prosperity, a Koch-affiliated group. "Those who know him well are not surprised."

Trump told aides that he wanted to ban Marc Short, the Vice-President's chief of staff, from the West Wing, for giving Pence advice to certify, and that he was not interested in seeing Pence. But no one carried out the ban and Short continued to come to work, officials said, and scheduled a Pence going-away event for Friday.

On Friday evening, Pence came to his office suite with wife, Karen, and his daughter Charlotte for a farewell ceremony. He told the room of aides that he hoped they were proud of what they'd accomplished in the administration and encouraged them to continue to work in public service, a person present at the meeting said. He was given a four-minute standing ovation and was presented with his Cabinet chair.

He told the room that early on Thursday morning as he left the Capitol, after certifying the results from Biden, he received a text message from Short.

"2 Timothy 4:7," the text said. The Bible verse reads: "I have fought the good fight, I have finished the race, I have kept the faith."