London: The face-to-face tension among foes was gone. So was the in-person camaraderie among allies.

Gone were the impromptu and urgent "bilats" – bilateral meetings between leaders to iron out a sticking point. Gone was the image of one leader leaning over another seated counterpart, whispering into an ear in a conspiratorial fashion before, perhaps, they shared a laugh. Gone, for now, were the lavish dinners and toasts honed to the host nation's cultural traditions. 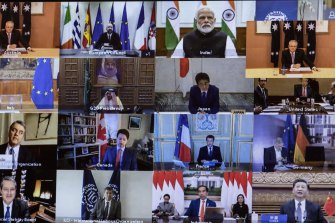 A view of members taking part on screen during an unusual G20 summit.Credit:Getty Images

Like much else in the time of coronavirus, governing as a global leader attending high-level summitry has been unceremoniously upended.

Thursday's virtual meeting of the Group of 20 nations, with more than a dozen heads of state participating, was less a global summit and more of a high- powered conference call. It lasted about 90 minutes – the same as a standard soccer match – instead of the usual, more languid two days.

Hangzhou, Hamburg, Buenos Aires and Osaka had been the hosts for the previous years' gatherings. For 2020, it was to be Riyadh, Saudi Arabia.

Chaired by Saudi King Salman, who is presiding over the G20 this year, the meeting's purpose was to tackle the pandemic and its economic implications as people lose their incomes amid closures, curfews and lockdowns.

In opening remarks, the Saudi king said, "This human crisis requires a global response. The world counts on us to come together and cooperate in order to face this challenge."

But coming together never seemed more of a metaphor than it did at this particular "gathering."

Extraordinary images emerged on social media of conference call gallery shots – the kind that legions around the world, pushed into working from home, have become accustomed to seeing in recent days.

Instead of unshaven or dressed down colleagues, there were US President Donald Trump, Japan's Prime Minister Shinzo Abe, India's Narendra Modi, French President Emmanuel Macron, Canada's Justin Trudeau, and Australia's Scott Morrison, among others, interacting in pixels with the Saudi monarch.

Instead of wall-to-wall live video coverage and photographers' cameras snapping, the only indication the virtual summit had started was a lone ticker on Saudi TV.

For Saudi Arabia, this was not what it expected or wished. When its crown prince, Mohammed bin Salman, attended the G20 summit in Argentina at the end of 2018, it was largely as a pariah. Video showed him standing alone, apart, after global revulsion at the slaying of journalist Jamal Khashoggi at the kingdom's consulate in Istanbul. The blame from many quarters was resting firmly at his door.

Then came some salvation: Russia's President Vladimir Putin steadfastly made his way to bin Salman, and they exchanged a robust high-five with a wide smile. For better or for worse, these are the type of personal moments that define high-level summits.

There was no such moment on Thursday. There were only pixels and screens, digitised audio and leaders in rooms scattered across a beleaguered planet. When the world's leaders came together, they did it separately. And then – with no ceremony, no meal, no shared group photo – they hung up and went about their ever more uncertain days.